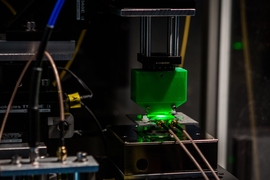 ↓ Download Image
Caption: A new method developed by researchers at MIT could lead to a way of producing high-resolution images of individual biomolecules without requiring crystallization, and it could even allow zoomed-in imaging of specific sites within the molecules.

Caption:
A new method developed by researchers at MIT could lead to a way of producing high-resolution images of individual biomolecules without requiring crystallization, and it could even allow zoomed-in imaging of specific sites within the molecules.
Credits:
Photo: Nathan Fiske

Determining the exact configuration of proteins and other complex biological molecules is an important step toward understanding their functions, including how they bind with receptors in the body. But such imaging is difficult to do. It usually requires the molecules to be crystallized first so that X-ray diffraction techniques can be applied — and not all such molecules can be crystallized.

Now, a new method developed by researchers at MIT could lead to a way of producing high-resolution images of individual biomolecules without requiring crystallization, and it could even allow zoomed-in imaging of specific sites within the molecules. The technique could also be applied to imaging other kinds of materials, including two-dimensional materials and nanoparticles.

The findings are reported this week in the Proceedings of the National Academy of Sciences, in a paper by Paola Cappellaro, the Esther and Harold E. Edgerton Associate Professor of Nuclear Science and Engineering at MIT, and others at MIT and at the Singapore University of Technology and Design.

“There are advantages to being able to see at the level of single protein molecules,” Cappellaro says, because that allows imaging of some molecules that can’t be imaged using the conventional X-ray method. “There are some types of molecules, such as membrane proteins, that are quite difficult to crystallize.”

But these sensors have been severely limited by the sampling rate of the microwave pulses used to probe them. Now, the research team has found that this limitation can be overcome using a method they call “quantum interpolation,” which improves the resolving power of such systems by more than a hundredfold, Cappellaro says.

In order to reveal the tiny variations of the magnetic fields associated with some atoms in the molecule whose configuration is being analyzed, it’s necessary to observe changes that take place within a few picoseconds, or trillionths of a second. In principle, such tiny increments of time can be resolved using large, specialized instruments, but these are very expensive and not available to most researchers. So Cappellaro and her students, not having access to such systems, set out to find a lower-cost, simpler approach to making such observations.

The new scheme is similar to the way some mobile phone cameras provide better resolution by taking multiple images of the same scene, with slightly different exposures, and then adding the images together. It’s also similar to sophisticated techniques used by astronomers and NASA researchers to improve the resolution of images taken by planetary rovers or the Hubble Space Telescope. “We try to mimic what the human eye does automatically,” which is to move constantly and build up detail through multiple images of the same area, which the brain knits together into a single picture, Cappellaro says.

In this case, the technique is applied to variations in the strength of a magnetic field, rather than variations in light intensity and color, but the underlying principles are similar. And, whereas the classical technique involves taking a series of images and adding them together, in this method the researchers take a single image but vary the separation of microwave pulses during the acquisition of that image.

By applying microwave pulses that are separated by time increments on a scale of nanoseconds — more than 100 times longer than the desired time resolution — the team was able to achieve the higher resolution that would be needed to get detailed structural information about the spin-state of individual atoms in biological molecules. The data could be used to help unravel the complex shapes of some biologically important proteins and other molecules, as well as other kinds of materials.

So far, the team’s proof-of-principle experiments produced images of just the nuclear spin associated with the sensor itself — the nitrogen vacancy center within a diamond crystal. The next step, which Cappellaro says should be within reach now that the principle has been validated, will be to try the method on actual biomolecules.

“All the various pieces have been demonstrated” to enable molecular imaging, she says. “So combining the different techniques should be a straightforward, though difficult to reach, goal.” The next step, she says, is to see “if we can measure a single protein in its natural environment,” which may help reveal important features such as binding sites.

Paola Cappellaro: a quantum engineer on the frontier of knowledge