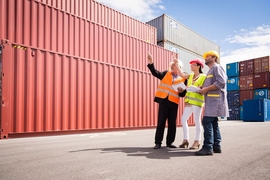 ↓ Download Image
Caption: MIT’s inaugural MicroMasters program in supply chain management drew more than 180,000 learners of all ages, from around the world. More than 1,100 learners finished all five of the courses required to earn the MicroMasters credential.

Caption:
MIT’s inaugural MicroMasters program in supply chain management drew more than 180,000 learners of all ages, from around the world. More than 1,100 learners finished all five of the courses required to earn the MicroMasters credential.

The first-ever cohort in MIT’s inaugural online MicroMasters program — consisting of more than 1,100 learners who completed all five of the online courses in supply chain management — has received its final MicroMasters certificates and will be honored at an online ceremony today.

Of those learners who opted to take the proctored comprehensive final exam, 622 achieved passing grades, automatically earning a chance to apply for a full master’s degree. Combining credit for the completed online coursework plus one semester of on-campus classes, this “hybrid” master’s is available at MIT or any of several partner institutions: University of Queensland, in Australia; Curtin University, in Australia; Rochester Institute of Technology, in Rochester, New York; and the Zaragoza Logistics Center, in Spain.

Given that the MicroMasters’ testing process and course standards are designed to be as demanding as those of on-campus MIT classes, the MicroMasters credential itself is also expected to provide those who earn it with opportunities for career advancement.

"When we first announced the MicroMasters, our goal was to offer serious learners anywhere a practical credential that does justice to their academic drive, ambition, and achievement,” says MIT President L. Rafael Reif. “Thanks to the members of this remarkable first cohort — their commitment to learning, their sustained efforts and determination, and their inspiring success as MicroMasters pioneers — we have the confidence to continue to find creative ways to leverage MicroMasters programs to build pathways to a master's degree.”

The MicroMasters program in supply chain management has drawn more than 180,000 learners of all ages, from around the world, says Yossi Sheffi, director of MIT’s Center for Transportation and Logistics and director of the MIT supply chain management program, who taught some of the online classes. “Their enthusiasm and excitement were amazing,” he says of the MicroMasters participants, some of whom met him in person at the finals and described how the experience had already changed their lives.

More than 1,100 learners finished all five of the required courses, he says, and there was a great deal of interaction among them, the faculty, and an army of volunteer “community teaching assistants” who responded to all learners’ queries. The teaching team had decided that all such queries should be answered within an hour, so “The scale of it makes it very difficult,” says Sheffi, who is the Elisha Gray II Professor of Engineering at MIT. But the process worked, and participants around the world responded with enthusiasm. “The impact is enormous,” he adds.

Sheffi estimates that it would take roughly 350-580 years of teaching traditional MIT classes in supply chain management to teach a comparable number of students as were reached through the MicroMasters program. In the end, more than 750 learners chose the extra step of taking the in-person final exam, on which a passing grade could earn them a MicroMasters credential in supply chain management as well as the opportunity for a mixed online and residential master’s degree.

Those who passed can now qualify for a master’s program even if they lack many of the traditional application requirements, including GRE scores or even an undergraduate degree. Since their progress through the classes has been monitored and recorded, click by click, “We know about these students,” Sheffi says. “We don’t have to rely on a letter from a professor we don’t know.”

The fact that these learners have completed the five required classes “shows grit,” says Chris Caplice, director of the MicroMasters program in supply chain management and executive director of the MIT Center for Transportation and Logistics, who taught most of the classes. “They’ve spent a lot of time working on this to advance their careers.”

The participants spanned a wide range of nationalities, ages, and backgrounds. They ranged from supply-chain professionals with decades of experience who wanted to expand their skills, to a pair of 14-year-old twins looking toward future career possibilities. Those teaching the classes were surprised by the number and diversity of the participants.

Sanjay Sarma, vice president for open learning and the Fred Fort Flowers and Daniel Fort Flowers Professor in Mechanical Engineering, says “I’m over the moon” about the outcome of this first experiment with an MITx MicroMasters. “When you create a program like this, there’s a lot of guesswork — informed, but still guesswork. So I’m very pleased and pleasantly surprised” by the response. Clearly, he says, “there’s a huge unmet need here. These are not easy courses. It’s a lot of work, but people have taken the effort to do it.”

Paulina Gisbrecht, a logistics manager with a German power company who earned the MicroMasters certificate, says, “What we learned was on the one hand challenging and complex enough to reflect the real-world problems, but on the other hand still sufficiently simple to be understood well.”

“I've enjoyed being challenged academically in my own professional field,” says Bill Seliger, director of supply chain at LSC Communications in Chicago. “As a lifelong learner, a supply chain practitioner, and an educator, it's been a honor and a pleasure to be able to take part in these classes.”

Michel Groenner, a senior logistics analyst at Votorantim Cimentos, in São Paulo, Brazil, plans to follow up the online learning with the full hybrid master’s program. He says, “I looked for this course to reinforce some concepts of SCM, and I ended up enjoying it so much that I am completing the credential. I plan to apply for the blended master’s degree in SCM. I was very impressed to see that the concepts covered in the course were extremely close to my daily life.”

The program has also reached many learners who would have been unlikely or unable ever to take part in a residential master’s program like MIT’s. Moses Mfune of Dar es Salaam, Tanzania, says “I’m convinced beyond doubt that supply chain management could offer a very good reason for the poor state of economic performance in many African countries. Teaching SCM and making others understand the importance of SCM will not only be beneficial to individuals or small and medium enterprises, but to my country too.”

Sarma sees this project as a great example of MIT’s strengths: “We’re meritocratic; we search for merit and talent. Our exclusivity is our inclusivity, in that sense.” The MicroMasters program embodies that concept, providing multiple advantages, he says.

First, it makes the knowledge and learning associated with an MIT credential more broadly accessible than ever. It also provides a way of identifying talent, no matter where in the world it may be. And, it provides people who are already working in the field a way to hone their skills, without having to leave their jobs to do so.

For those who get admitted to the hybrid master’s program, the ability to transform the effort of a semester’s worth of online learning into a semester of credit toward a full MIT master’s, Sarma says, “helps to establish [the MicroMasters] as a credit equivalent. It is signaling that it’s good enough for us.”

The next course of the MicroMasters program in supply chain management starts on Sept. 13.

Inside Higher Ed reporter Carl Straumsheim writes about the results from the first group of students to participate in MIT’s MicroMasters in Supply Chain Management. Sanjay Sarma, MIT’s vice president for open learning, explains that the MicroMasters model has proven to be, “an extraordinary fishing line for talent.”

MIT master’s program in supply chain management ranked No. 1 in the world