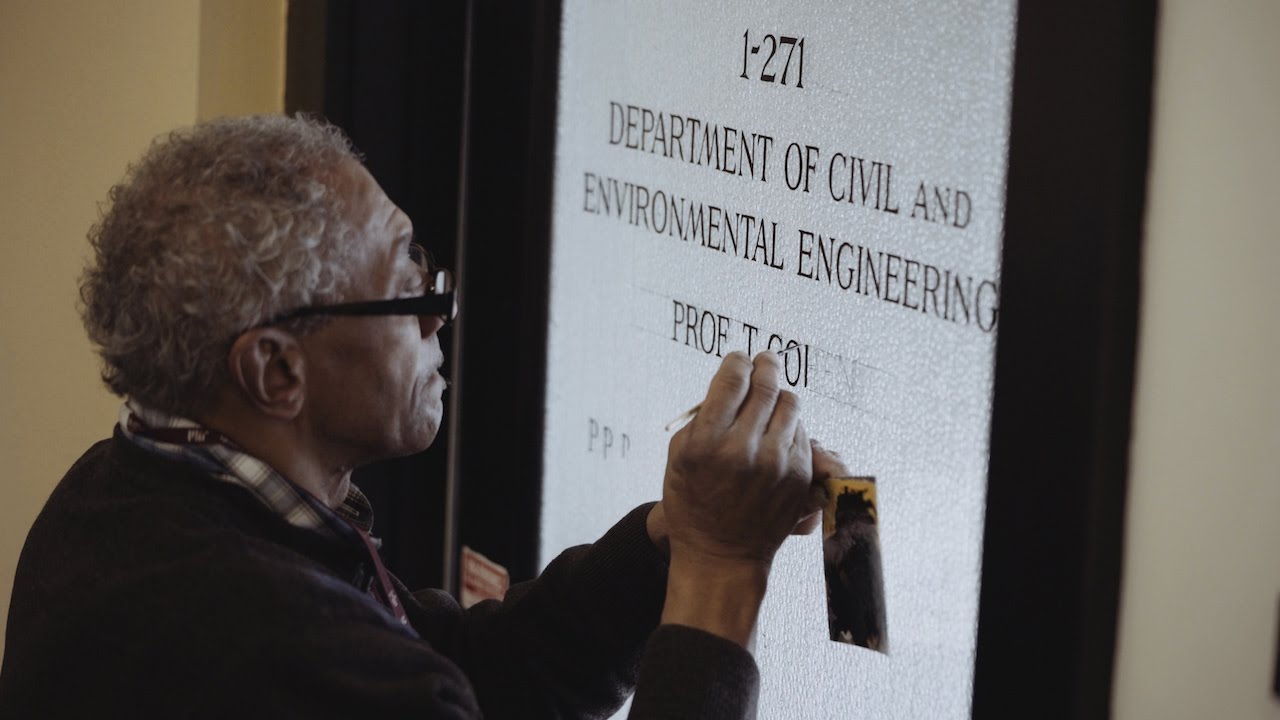 “When I was new to MIT, I interviewed a lecturer who had also been a student here. He mentioned the nostalgic feeling of walking through the campus and seeing the hand-painted lettering on the doors. The doors, he said, had remained a constant on the landscape while so much else has changed. I hadn’t even noticed the signs were hand-painted, or that they were so much part of the MIT culture. As time went by, I became further intrigued when I heard people excitedly mention that they spotted the 'painter' in a hallway somewhere! They would find him, just like I did, expertly crafting the name of a new-comer, while his own name and identity remained a mystery.

It took a bit of looking, but I eventually found out that his name is Glenn Silva. When I tracked him down, he graciously agreed to let me accompany him on assignment and to tell me his story. As any video producer will tell you, a painful number of beautiful snippets are left on the cutting-room floor. With Glenn, it was especially hard to let many things go. His story is full of color and life and an undying love for his craft. For instance, some time long ago Glenn became interested in buying a computer. He went shopping and found a salesperson who was anxious to explain all the wonderful things a computer could do for him. Glenn asked if it would be able to create letters that could cast shadows, and the salesperson reluctantly admitted that it could not. 'I’ll come back when computers can do that!' Glenn told him. Sure, computers today can do all of this (and much more), but I love how much that line captures a world view — and how much it speaks for a profession that has nearly vanished.

Glenn has spent more than 25 years lettering the doors at MIT. He says the classic look of those signs extends much further back than his own time here, but that all of the painters who preceded him did their best to keep their work as close as possible to the original style, while adding something of their own signature to the finished product. It makes sense that the story behind them is one of dedication and love for a difficult thing. I see Glenn’s work as special in a very MIT way. The reasons for that are hard to articulate, but I don’t really have to. The results are here, on doors down every hallway, and people witness Glenn doing his thing almost every day — and they feel it. It’s what makes him an artist.”

—Lillie Paquette, videographer in the MIT School of Engineering

Boston Globe reporter Steve Annear spotlights the work of Glenn Silva, who has hand-painted the names of hundreds of employees and departments on doors around MIT. Silva says he enjoys hand-lettering “because it gives you a lot of peace of mind, and you are focused on what you’re doing.”