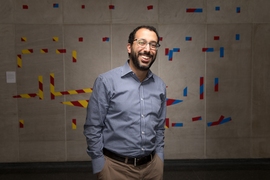 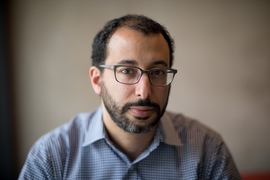 Caption:
“I’m driven by developing methodology that will be broadly useful,” says Youssef Marzouk, associate professor of aeronautics and astronautics at MIT.

How does today’s weather compare with what was forecast a week or even a day ago? Is that torrential Nor’easter that was predicted in fact just a light drizzle? Has the sun, projected to emerge from the clouds at 11 a.m., instead appeared at noon?

It may come as no surprise that weather predictions come with a fair amount of uncertainty, as do any predictions of large, complex, and interacting systems. And yet, many of us depend on such simulations for information, from everyday traffic and weather reports, to long-term projections for climate.

“You’re sort of using a simulation as an oracle,” says Youssef Marzouk, associate professor of aeronautics and astronautics at MIT. “But if we’re really going to use computations as a way of predicting what’s happening in the world, how can we get a handle on this very fuzzy problem of how believable the computations are?”

Quantifying and reducing the uncertainty in complex computational models is the major theme in Marzouk’s work, which he is applying to a wide range of problems, including tracking underground contaminants, characterizing combustion in jet engines, estimating the concentrations of trace gases in the atmosphere, and improving the accuracy in weather forecasts.

“I’m driven by developing methodology that will be broadly useful,” says Marzouk, who earned tenure in 2016.

In the 1970s, Marzouk’s parents emigrated from Egypt to the U.S., ultimately settling in St. Louis, Missouri, where his father took up a faculty position at Washington University’s School of Dental Medicine. Before their move, Marzouk’s mother worked as a translator, performing simultaneous translations in French and Arabic for diplomats in the Middle East.

Marzouk and his sister were born and raised in suburban St. Louis, and he remembers feeling a pull toward science and math from an early age.

“When I was in grade school, kids would be playing in the playground, and I stayed in the classroom because I wanted to add the biggest numbers I possibly could,” Marzouk recalls. “I was a relatively nerdy kid.”

As his academic pursuits grew, so did his passion for music. Marzouk, following in his sister’s footsteps, took up piano lessons when he was 6 years old. In high school, he regularly participated in science fairs, and he entered and sometimes won piano competitions. In retrospect, he says that his interests in music and math may have shared some overlap.

“There’s a level of abstract thinking and conceptual thought involved in understanding the structure of a piece of music that, in some indirect way, can carry over to math and quantitative thinking,” Marzouk says.

In the summer before his junior year of high school, Marzouk took part in a program that placed students in local university labs as summer interns. He worked in a combustion lab at Washington University, studying the physical and chemical interactions involved in producing flames.

“It was my first exposure to mechanical engineering,” Marzouk says. “There were high temperatures, flames, blowing things up — what more could you want?”

He liked the work so much that he continued participating in the lab for the next two and a half years. After graduating high school, he decided to study mechanical engineering at MIT, where he found an immediate connection during Campus Preview Weekend.

“People were down to earth; they were excited about what they were doing. It was very relatable and full of techie people I could talk to,” Marzouk says. “People wanted to work with and help each other to solve puzzles. I think this is still true of the students I see today.”

That experience helped steer Marzouk toward more computational research. He continued his master’s and PhD work at MIT under the guidance of mechanical engineering professor Ahmed Ghoniem, concentrating again in the field of fluid dynamics but this time from a modeling perspective. For his thesis, he developed a computational model of how a jet of fluid mixes with a cross-flow, yielding new insights useful for improving the design of jet engines.

After receiving his PhD, Marzouk spent four years working as a postdoc and staff member at Sandia National Laboratories, developing computational models to simulate processes in the physical world. Specifically, he looked for ways to model subsurface flows of radioactive waste and other contaminants that seep through soil and rocks — information that is crucial for determining where and how to clean up contamination and prevent its leakage into aquifers. He soon found that modeling such physical systems was a daunting task with countless unknowns.

“I started getting interested in what aspects of your computational prediction should you actually believe, and what parts are not so reliable or trustworthy?” Marzouk says.

For instance, he says a model’s mathematical formulas that should characterize a certain relationship, such as a porous medium’s response to a given pressure, may not be “perfectly predictive.” Data from actual subsurface measurements can help refine the model, but the number of measurements that can be practically made are limited. Uncertainty, therefore, is intrinsic to both building models and drawing conclusions from data.

Marzouk surmised that if researchers could quantify the uncertainty in a model and a dataset, they could begin to reduce that uncertainty, to produce a more accurate prediction of the state of a physical system. To do this, he dove into Bayesian statistics, a philosophy of statistics which represents the state of the world in terms of probability, or degrees of uncertainty.

“Uncertainy can still encode knowledge,” says Marzouk, who continued this line of work, known as uncertainty quantification, when he accepted a faculty position in MIT’s Department of Aeronautics and Astronautics in 2009.

At MIT, Marzouk has been developing methods to quantify and reduce uncertainty in computational models. He’s also finding ways to identify the best quantities to measure in order to improve a model’s prediction.

“You might have thousands of uncertain parameters, and you could boil them down to maybe 20 that matter and that are informed by data, which makes the problem much more tractable,” Marzouk says.

He’s applied his methods to a number of wide-ranging, high-dimensional problems, from subsurface flow and combustion in jet engines, to estimating the concentration of gases throughout Earth’s atmosphere.

“I’m particularly interested in geophysical phenemona which are complex and where data may be very expensive to acquire,” Marzouk says. “There’s a lot of uncertainty, and characterizing that uncertainty is important.”

In the coming years, he plans to nail down and reduce the sources of uncertainty in  continuously changing models, such as weather forecasting tools, which are constantly updated with a glut of streaming data from ground, air, and space sensors.

“We know mathematically how to formulate rigorous predictions of uncertainty,” Marzouk says. “But doing that for a system the size of the weather is hopelessly out of reach. Our algorithms are giving rise to a new class of approximations that might make uncertainty quantification for these kind of problems more tractable.”