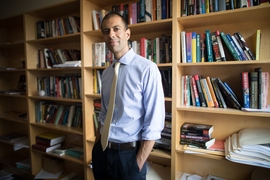 ↓ Download Image
Caption: "I’ve been fortunate to have great graduate students from the day I got here, and I’m very proud of how they’ve done," Vipin Narang says.
Credits: Photo: Bryce Vickmark

Caption:
"I’ve been fortunate to have great graduate students from the day I got here, and I’m very proud of how they’ve done," Vipin Narang says.
Credits:
Photo: Bryce Vickmark

About a decade ago, when Vipin Narang started writing his doctoral dissertation on nuclear strategy, he encountered a little problem: People around him thought his thesis would be irrelevant.

“Everyone told me, ‘Don’t do it,’ because nuclear weapons were supposedly a Cold War relic,” Narang says. Graduate students in international relations were more typically studying globalization, human rights, and ethnic insurgencies. “Those were hot topics, and nuclear weapons were considered old-school,” Narang adds.

If only. Today, Narang is an associate professor in MIT’s Department of Political Science and a member of its Security Studies Program. Nuclear dangers are again an urgent political topic. And Narang’s particular focus — the acquisition of nuclear weapons by countries beyond the traditional superpowers — is something that keeps people awake at night, as they contemplate rising tensions between the U.S. and North Korea.

“Now it’s back with a vengeance,” Narang observes. “And we’re worried about regional proliferation now. We’re not talking about Cold War nuclear strategy any more. We’re talking about small states with small arsenals and itchy trigger fingers. It really changes how we think about nuclear risks and nuclear dangers as a result.”

Narang’s work also represents an intellectual shift in nuclear security studies. During much of the Cold War, the logic of “mutual assured destruction” explained why the U.S. and the Soviet Union had acquired massive arsenals — but might not use them.

But now 10 countries have nuclear weapons, linked to a variety of military strategies. India and China have largely retaliatory postures; they pledge not to use nuclear weapons first but are virtually certain to retaliate if they are attacked. France and Pakistan have relatively small arsenals but deploy what Narang calls an “asymmetric escalation” strategy, threatening nuclear use if attacked by conventional means. Israel and South Africa have adopted what Narang terms a “catalytic” posture, with the nuclear threat intended to get larger allies to intervene for them.

Until recently, North Korea seemed to be in the “catalytic” category, with China as its protector — yet it has now distanced itself from China.

“Today it’s very clear North Korea has an asymmetric escalation strategy,” Narang says. “We’re in a very unstable phase right now.” To be sure, the U.S. and North Korea could arrive at a safer equilibrium, a bit like India and Pakistan have — but still, Narang says, it would help if the U.S. clearly understood North Korea’s strategic situation.

“Nuclear weapons can be stabilizing under a very specific set of conditions,” Narang observes. “But accidents happen, humans are fallible, and nuclear use is a real possibility. The reason we have to stay abreast of this topic and not get complacent is so states don’t ever have an incentive to use [nuclear weapons], and all the risks that come with them don’t ever manifest themselves.”

Narang did not decide to pursue security studies until he was winding down his undergraduate work. At Stanford University, he majored in chemical engineering, with a minor in international relations.

Scott Sagan, a Stanford political scientist, helped spur Narang’s interest in the subject, as did a Stanford teaching assistant named Taylor Fravel. After college, Narang spent two years on a prestigious Marshall Scholarship at Oxford University, digging deeper into nuclear security studies, then got his PhD at Harvard University.

Looking back, Narang says his career trajectory owes much to the encouragement of people such as Sagan and Fravel — who is now a China expert and associate professor at MIT, with an office just down the hall from Narang.

“As with everything, it’s the role of individual teachers and mentors that really keeps you going,” Narang says. “If not for Scott and Taylor, I probably wouldn’t have tried to go to the U.K. or entered into this field. Taylor and I reuniting here is kind of going full circle.”

Narang joined the MIT faculty in 2010 and was promoted to associate professor in 2014, the same year his first book, “Nuclear Strategy in the Modern Era,” was published by Princeton University Press. In it, Narang lays out his typology of the different strategies used by countries in this “second nuclear age,” as he terms it in the book. The book won the 2015 International Security Section Best Book Award from the International Studies Association.

Narang has also written over a dozen published articles and book chapters on nuclear weapons, and is writing a second book, “Strategies of Nuclear Proliferation,” which is under contract with Princeton University Press. For his research and teaching, Narang was awarded tenure earlier this year.

In the book he’s working on now, Narang examines the different ways countries go about acquiring nuclear capabilities in the first place. Some, such as Iraq and Libya, have tried to acquire nuclear weapons in secret, and failed.

“In a lot of ways, the pressure on these countries to hide [their activities] works to the international community’s advantage, because hiding weapons programs forces inefficiencies into the process,” Narang says. “And it gives you time to detect an illegal new weapons program.” Even so, North Korea’s secretive development process succeeded.

Other countries, meanwhile, employ what Narang calls a “hedging strategy,” building some technical capabilities, but not weapons.

“A lot of states may not want a bomb today,” Narang observes. “But they may want one tomorrow. And so they put the pieces in place to be able to culminate acquisition and shorten the window to weaponizing. Japan is probably the world’s best example.” Japan has processed plutonium, for example, but has no weapons program.

“For all intents and purposes, Japan is a virtual nuclear state, but it has not made the decision to acquire or organize its capabilities … yet,” Narang adds.

Narang’s interest in nuclear security may have been unusual in his student days, but at MIT, he notes, he has found an ideal setting for his career. The Institute has long had a deep bench of nuclear security experts — which is unusual even for other universities with major programs in security studies.

“There is [still] a dearth of people who are recently trained in this area and have studied the regional powers,” Narang says.

But as a professor, he has the ability to change that, by teaching undergraduates and training graduate students who want to enter the field. And Narang raves about the quality of MIT’s PhD students.

“I’ve been fortunate to have great graduate students from the day I got here, and I’m very proud of how they’ve done,” Narang says. “I ride their coattails, because they’re so good. If I could pay forward a fraction of what’s been given to me, I’d be very happy.”

Helping train future generations of scholars is important to him, he adds, in large part because of the seriousness of nuclear security. It is important to understand and inform everyone — citizens, policymakers, diplomats, world leaders — about nuclear weapons.

“There is a very human side to this,” Narang says. “These are the most terrible weapons ever developed. The motivation to study it is so that they’re never used.”