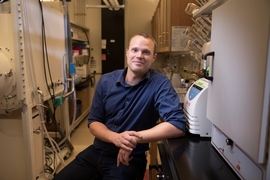 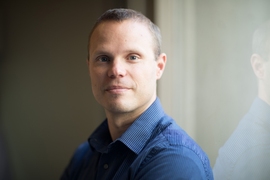 Tiny sensors made of antibodies, protein nanospheres that can clean up toxic spills, and gels that could be injected into a wound to initiate healing are just a few of the innovations emerging from Bradley Olsen’s lab at MIT.

Olsen’s research is based on exploring the physical properties of new types of polymers, and taking advantage of those properties to design novel materials that could have many useful applications.

His lab, which includes 15 to 20 students and postdocs, pursues these approaches mainly in the field of protein-polymer chemistry, a relatively new discipline that involves incorporating proteins into polymer materials. He credits those students with many of the key discoveries that have yielded these novel materials.

“It’s a group effort,” he says. “I think the talent and wisdom of the team far exceeds anything I could do individually.”

Growing up in Minneapolis, Olsen became interested in chemistry in high school and applied to MIT in part because he was drawn to the Undergraduate Research Opportunities Program (UROP), which allows undergraduates to conduct research in the labs of MIT faculty.

While majoring in chemical engineering, Olsen spent three years working in the lab of Karen Gleason, the Alexander and I. Michael Kasser Professor of Chemical Engineering. At the time, Gleason was developing early versions of a technique known as initiated chemical vapor deposition, which allows scientists to use gases to form thin polymer coatings on a surface.

As a graduate student at the University of California at Berkeley, Olsen began working on synthesizing a special kind of polymers known as block copolymers. These materials consist of alternating blocks of two different kinds of monomers, which are the building blocks for synthetic polymers such as plastics and rubber.

When these monomers are arranged in blocks, it gives the overall material special properties. For example, the material may contain two monomers that would normally separate into layers, the way oil and water do. If those two chemically dissimilar molecules are bound together in a block copolymer, they can’t form separate layers. Instead, block copolymers assemble themselves into special structures, such as spheres, cylinders, or sheets, that help to minimize the interactions between the two chemically different blocks. Such materials are now commonly used in many products, including elastomers, adhesives, and personal care products.

As a graduate student, Olsen studied how these kinds of polymers could be used to control the nanostructure of semiconducting polymers. Then, as a postdoc at Caltech, he worked on developing injectable hydrogels, which could potentially be used for wound healing and stopping blood flow.

While at Caltech, Olsen received an offer to return to MIT as a faculty member, which he found hard to resist. “MIT certainly has very good students and very good colleagues, and I definitely had some nostalgia for the Boston area,” he says. “It’s fun to be back here.”

At MIT, Olsen has continued to develop block copolymers for a wide range of applications. In one area of research, he is designing materials where one block is a polymer and the other is a protein such as an enzyme or an antibody. These materials could then be formed into extremely sensitive biosensors.

“With this high-density array of proteins, you can potentially increase sensitivity by maybe a factor of 100 or 1,000, or even more,” Olsen says.

Protein-polymer hybrids also could be useful new materials that mimic the properties of nylons or polyurethanes, which are petroleum-derived materials that are found in hard plastics, coatings, insulation, and many other products. These new hybrids could potentially be produced in “biorefineries,” using sustainable sources of renewable biomass and making a positive impact on the environment.

Another potential application for block copolymers is detoxification, using spherical “nanoreactors” whose surfaces are coated with enzymes that could break down toxic chemicals from an oil spill. Olsen has also continued working on hydrogels, including the development of wound-healing materials, in collaboration with MIT’s Institute for Soldier Nanotechnologies.

“The things we work on are selected because the type of polymer-protein chemistry has a potential competitive advantage, and we try to apply our designs in that area,” he says.

MIT Professor Badley Olsen speaks with WCVB-TV about his work identifying new ways to reuse rubbers and plastics. His research has allowed for fashion companies to produce sustainable and comfortable clothing and accessories for consumers. “You can both decrease the amount of petroleum you take out of the ground to make new materials and you can reduce the amount of waste. I think both of these are really important for the sustainability of our city and our society,” says Professor Olsen.