Designing the microstructure of printed objects 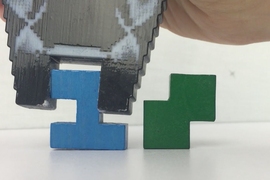 ↓ Download Image
Caption: Researchers at MIT’s CSAIL have developed a new design system that catalogues the physical properties of a huge number of tiny cube clusters. These clusters can then serve as building blocks for larger printable objects. The system thus takes advantage of physical measurements at the microscopic scale, while enabling computationally efficient evaluation of macroscopic designs.

Caption:
MIT researchers have developed a new design system that catalogues the physical properties of a huge number of tiny cube clusters. These clusters can then serve as building blocks for larger printable objects.

Today’s 3-D printers have a resolution of 600 dots per inch, which means that they could pack a billion tiny cubes of different materials into a volume that measures just 1.67 cubic inches.

Such precise control of printed objects’ microstructure gives designers commensurate control of the objects’ physical properties — such as their density or strength, or the way they deform when subjected to stresses. But evaluating the physical effects of every possible combination of even just two materials, for an object consisting of tens of billions of cubes, would be prohibitively time consuming.

So researchers at MIT’s Computer Science and Artificial Intelligence Laboratory (CSAIL) have developed a new design system that catalogues the physical properties of a huge number of tiny cube clusters. These clusters can then serve as building blocks for larger printable objects. The system thus takes advantage of physical measurements at the microscopic scale, while enabling computationally efficient evaluation of macroscopic designs.

“Conventionally, people design 3-D prints manually,” says Bo Zhu, a postdoc at CSAIL and first author on the paper. “But when you want to have some higher-level goal — for example, you want to design a chair with maximum stiffness or design some functional soft [robotic] gripper — then intuition or experience is maybe not enough. Topology optimization, which is the focus of our paper, incorporates the physics and simulation in the design loop. The problem for current topology optimization is that there is a gap between the hardware capabilities and the software. Our algorithm fills that gap.”

Zhu and his MIT colleagues presented their work this week at Siggraph, the premier graphics conference. Joining Zhu on the paper are Wojciech Matusik, an associate professor of electrical engineering and computer science; Mélina Skouras, a postdoc in Matusik’s group; and Desai Chen, a graduate student in electrical engineering and computer science.

The MIT researchers begin by defining a space of physical properties, in which any given microstructure will assume a particular location. For instance, there are three standard measures of a material’s stiffness: One describes its deformation in the direction of an applied force, or how far it can be compressed or stretched; one describes its deformation in directions perpendicular to an applied force, or how much its sides bulge when it’s squeezed or contract when it’s stretched; and the third measures its response to shear, or a force that causes different layers of the material to shift relative to each other.

Those three measures define a three-dimensional space, and any particular combination of them defines a point in that space.

Researchers used their algorithm to design soft grippers with microstructures that can grasp objects by moving their tips when external forces are applied to their extremities. (The Computational Fabrication Group at MIT)

In the jargon of 3-D printing, the microscopic cubes from which an object is assembled are called voxels, for volumetric pixels; they’re the three-dimensional analogue of pixels in a digital image. The building blocks from which Zhu and his colleagues assemble larger printable objects are clusters of voxels.

In their experiments, the researchers considered clusters of three different sizes — 16, 32, and 64 voxels to a face. For a given set of printable materials, they randomly generate clusters that combine those materials in different ways: a square of material A at the cluster’s center, a border of vacant voxels around that square, material B at the corners, or the like. The clusters must be printable, however; it wouldn’t be possible to print a cluster that, say, included a cube of vacant voxels with a smaller cube of material floating at its center.

For each new cluster, the researchers evaluate its physical properties using physics simulations, which assign it a particular point in the space of properties.

Gradually, the researchers’ algorithm explores the entire space of properties, through both random generation of new clusters and the principled modification of clusters whose properties are known. The end result is a cloud of points that defines the space of printable clusters.

The soft mechanisms for flapping wings are embedded in the material by topology optimization. The wings of the ray are specified to flap up and down when vertices on its spine contract and expand. (The Computational Fabrication Group at MIT)

The next step is to calculate a function called the level set, which describes the shape of the point cloud. This enables the researchers’ system to mathematically determine whether a cluster with a particular combination of properties is printable or not.

The final step is the optimization of the object to be printed, using software custom-developed by the researchers. That process will result in specifications of material properties for tens or even hundreds of thousands of printable clusters. The researchers’ database of evaluated clusters may not contain exact matches for any of those specifications, but it will contain clusters that are extremely good approximations.

“The design and discovery of structures to produce materials and objects with exactly specified functional properties is central for a large number of applications where mechanical properties are important, such as in the automotive or aerospace industries,” says Bernd Bickel, an assistant professor of computer science at the Institute of Science and Technology Austria and head of the institute’s Computer Graphics and Digital Fabrication group. “Due to the complexity of these structures, which, in the case of 3-D printing, can consist of more than a trillion material droplets, exploring them manually is absolutely intractable.”

“The solution presented by Bo and colleagues addresses this problem in a very clever way, by reformulating it,” he says. “Instead of working directly on the scale of individual droplets, they first precompute the behavior of small structures and put it in a database. Leveraging this knowledge, they can perform the actual optimization on a coarser level, allowing them to very efficiently generate high-resolution printable structures with more than a trillion elements, even with just a regular computer. This opens up exciting new avenues for designing and optimizing structures at a resolution that was out of reach so far.”