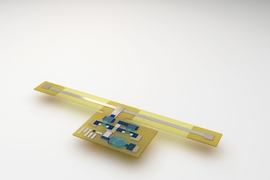 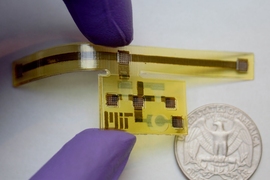 ↓ Download Image
Caption: Researchers have designed and built a device that responds to mechanical stresses by changing the color of a spot on its surface.
Credits: Image: Subramanian Sundaram

Caption:
The components that make up the printable device.

Caption:
Researchers have designed and built a device that responds to mechanical stresses by changing the color of a spot on its surface.

In this age of smartphones and tablet computers, touch-sensitive surfaces are everywhere. They’re also brittle, as people with cracked phone screens everywhere can attest.

Covering a robot — or an airplane or a bridge — with sensors will require a technology that is both flexible and cost-effective to manufacture in bulk. A team of researchers at MIT’s Computer Science and Artificial Intelligence Laboratory thinks that 3-D printing could be the answer.

In an attempt to demonstrate the feasibility of flexible, printable electronics that combine sensors and processing circuitry and can act on their environments, the researchers have designed and built a device that responds to mechanical stresses by changing the color of a spot on its surface.

The device was inspired by the golden tortoise beetle, or “goldbug,” an insect whose exterior usually appears golden but turns reddish orange if the insect is poked or prodded — that is, mechanically stressed.

“In nature, networks of sensors and interconnects are called sensorimotor pathways,” says Subramanian Sundaram, an MIT graduate student in electrical engineering and computer science (EECS), who led the project. “We were trying to see whether we could replicate sensorimotor pathways inside a 3-D-printed object. So we considered the simplest organism we could find.”

The researchers present their new design in the latest issue of the journal Advanced Materials Technologies. Sundaram is the first author on the paper, and the senior authors are Sundaram’s advisor, Wojciech Matusik, an associate professor of EECS; and Marc Baldo, a professor of EECS and director of the Research Laboratory of Electronics. Joining them on the paper are Pitchaya Sitthi-Amorn, a former postdoc in Matusik’s lab; Ziwen Jiang, an undergraduate EECS student; and David Kim, a technical assistant in Matusik’s Computational Fabrication Group.

Printable electronics, in which flexible circuitry is deposited on some type of plastic substrate, has been a major area of research for decades. But Sundaram says that the ability to print the substrate itself greatly increases the range of devices the technique can yield.

For one thing, the choice of substrate limits the types of materials that can be deposited on top of it. Because a printed substrate could consist of many materials, interlocked in intricate but regular patterns, it broadens the range of functional materials that printable electronics can use.

Printed substrates also open the possibility of devices that, although printed as flat sheets, can fold themselves up into more complex, three-dimensional shapes. Printable robots that spontaneously self-assemble when heated, for instance, are a  topic of ongoing research at the CSAIL Distributed Robotics Laboratory, led by Daniela Rus, the Andrew and Erna Viterbi Professor of Electrical Engineering and Computer Science at MIT.

“We believe that only if you’re able to print the underlying substrate can you begin to think about printing a more complex shape,” Sundaram says.

The MIT researchers’ new device is approximately T-shaped, but with a wide, squat base and an elongated crossbar. The crossbar is made from an elastic plastic, with a strip of silver running its length; in the researchers’ experiments, electrodes were connected to the crossbar’s ends. The base of the T is made from a more rigid plastic. It includes two printed transistors and what the researchers call a “pixel,” a circle of semiconducting polymer whose color changes when the crossbars stretch, modifying the electrical resistance of the silver strip.

“You wouldn’t want to connect all the sensors to your main computer, because then you would have tons of data coming in,” he says. “You want to be able to make clever connections and to select just the relevant signals.”

To build the device, the researchers used the MultiFab, a custom 3-D printer developed by Matusik’s group. The MultiFab already included two different “print heads,” one for emitting hot materials and one for cool, and an array of ultraviolet light-emitting diodes. Using ultraviolet radiation to “cure” fluids deposited by the print heads produces the device’s substrate.

Sundaram added a copper-and-ceramic heater, which was necessary to deposit the semiconducting plastic: The plastic is suspended in a fluid that’s sprayed onto the device surface, and the heater evaporates the fluid, leaving behind a layer of plastic only 200 nanometers thick.

The layer of saltwater lowers the device’s operational voltage, so that it can be powered with an ordinary 1.5-volt battery. But it does render the device less durable. “I think we can probably get it to work stably for two months, maybe,” Sundaram says. “One option is to replace that liquid with something between a solid and a liquid, like a hydrogel, perhaps. But that’s something we would work on later. This is an initial demonstration.”

“I am very impressed with both the concept and the realization of the system,” says Hagen Klauk, who leads the Organic Electronic Research Group at the Max Planck Institute for Solid State Research, in Stuttgart, Germany. “The approach of printing an entire optoelectronic system — including the substrate and all the components — by depositing all the materials, including solids and liquids, by 3-D printing is certainly novel, interesting, and useful, and the demonstration of the functional system confirms that the approach is also doable. By fabricating the substrate on the fly, the approach is particularly useful for improvised manufacturing environments where dedicated substrate materials may not be available.”