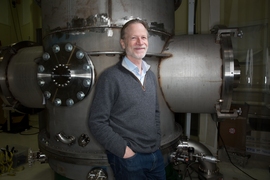 As spokesperson, Shoemaker will coordinate and speak on behalf of the gravitational wave science carried out by scientists in 15 countries in observatories located in Hanford, Washington, and Livingston, Louisiana, as well as a detector in Hannover, Germany.

“I’m honored and humbled to be able to speak on behalf of my colleagues and our research on gravitational wave detection,” says Shoemaker, a senior research scientist at MIT Kavli Institute for Astrophysics and Space Research, who was elected by the LSC’s council members to a two-year term.

“The collaborative work of more than 1,000 scientists and engineers has allowed us to pull the curtains and peek into the new window of the universe that was opened last year,” says Laura Cadonati, a professor in the School of Physics at Georgia Tech, and chair of the LSC’s Data Analysis Council, who will work closely with Shoemaker in his role.

Shoemaker has been working on interferometric instrumentation since the late 1970s when he worked in Professor Emeritus Rai Weiss’ lab, earning his master of science degree from MIT in 1980. After earning his PhD in physics from the University of Paris, Shoemaker returned to the Institute in 1989.

He became head of the MIT group working on LIGO in the early 1990s and later headed up the Advanced LIGO Project. Shoemaker was named a fellow of the American Physical Society for this work in the field.

"We are incredibly proud that David and other MIT scientists have played key roles in the landmark detection of gravitational waves," says Michael Sipser, dean of the School of Science and the Donner Professor of Mathematics. "Grown from Rai Weiss's original concept more than 50 years ago, the LIGO project stands out as a marvelous achievement for science."

“Based on his technical experience and interactive skills with people, I expect as spokesperson of the LIGO Scientific Collaboration, he will help advance both the detector sensitivity and the data analysis,” says Weiss.

The original LIGO Project, led by MIT and Caltech with support the National Science Foundation, established the Livingston and Hanford observatories, reached the instrument design sensitivity, and observed for an extended period. However, they did not have success in detecting gravitational waves during initial operations which ended in 2011.

After an overhaul of the instrumentation for Advanced LIGO, on Sept. 14, 2015, the instruments made the first direct detection of gravitational waves, just two days after scientists restarted observations.

“David’s leadership on the upgrade of the detectors was a major factor in the LIGO Laboratory’s detection of gravitational waves,” says Jacqueline N. Hewitt, director of the MIT Kavli Institute. “He has the deep technical knowledge not only to speak to future LIGO discoveries, but also to help coordinate the research of our collaborators around the globe.”

Three months later, the detectors picked up another signal from another black hole merger, 1.4 billion light years away.

“Now with confirmed observations of binary black holes, we are really eager to see what else the cosmos will deliver in the form of gravitational waves,” says Shoemaker.

In November of last year, scientists restarted the LIGO system after additional improvements were made to increase the observatory’s sensitivity by 10 to 25 percent. With these improvements, the detector in Livingston, Louisiana is a step closer to detecting the gravitational waves from other objects, such as the merger of two neutron stars.

Nergis Mavalvala, part of the MIT LIGO Laboratory team — whose research in the instrumentation development for the interferometric gravitational-wave detectors began as a graduate student at MIT— says she, too, is waiting for that next big leap forward.

“In the next two years, as the LIGO instruments improve, they will, and they should, be able to see more instances of objects such other binary black holes or things we haven’t, as of yet seen, such as coveted binary neutron stars,” says Mavalvala, the Curtis and Kathleen Marble Professor of Astrophysics and the associate head of the Department of Physics.

A neutron star-neutron star merger is thought to be the producer and distributor of heavy metals, such as precious metals, throughout the galaxy.

“But I imagine, there will come a moment in time in which gravitational waves will be observed, and we’ll have no clue what the source is,” Mavalvala says. “There will be something no one predicted.”

Shoemaker adds, “This will be a wonderful moment where we can unravel a mystery story for which the unique key is the gravitational-wave signature.”

Since the second Advanced LIGO detection run began late last year, three possible event candidates have been identified and shared with LSC astronomers. The analysis of these data is still ongoing, according to news shared on the LSC website.

“In addition to providing leadership on the development of future large-scale gravitational wave detectors, David will be a wonderful spokesperson to communicate the exciting new findings on behalf of the collaboration,” says Gabriela González, outgoing spokesperson for the LSC and professor of physics and astronomy at Louisiana State University. “In his role, he will continue to nurture the LSC’s teamwork and help further our mission of exploring the fundamental physics of gravity — and ultimately, the universe.