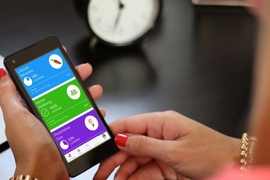 ↓ Download Image
Caption: Twine has developed a platform that lets users build customized disease-management and care plans on an app, which then sends alerts about when to take medications, tracks the patient’s various health goals, and offers key analytics, among other features.

Caption:
Twine has developed a platform that lets users build customized disease-management and care plans on an app, which then sends alerts about when to take medications, tracks the patient’s various health goals, and offers key analytics, among other features.

Lack of patient adherence to treatment plans is a lingering, costly problem in the United States. But MIT Media Lab spinout Twine Health is proving that regular interventions from a patient’s community of supporters can greatly improve adherence, leading to improved health outcomes and savings.

Twine has developed a platform that lets users build customized health action plans on an app, which then sends reminders to take medications and make lifestyle changes. The platform also tracks trends in adherence and progress toward goals, and offers key analytics, among other features. Moreover, patients can work independently or with health coaches, providers, family, and friends to co-create the plan, monitor its progress, and receive timely support and encouragement.

So far, the platform has shown promising results.

Now the startup is bringing the platform to the burgeoning workplace-health space, where employers hire health coaches and offer on-site clinics with aims of cutting costs associated with their medical plans by improving access to high-quality care.

“Employer premiums and deductibles for employees go up every year, because no one is containing the cost,” says CEO John Moore PhD ’13, a former physician who co-founded Twine with former Media Lab Director Frank Moss. “Decreased costs stem from improving people’s health outcomes by empowering them to participate more in their health management. If you empower the people — the employee or the patient — you get exponential gain.”

Twine has 65 workplace clients across the nation and is closing in on 100,000 employee users. In May, the startup partnered with St. Luke’s Medical Center in Idaho and Activate Healthcare. In June, Twine partnered with Wellness Coaches, which operates on-site health coaching for more than 500 employer worksites in 35 states. Some employers provide the service to employees with chronic diseases, while others enroll all employees to maintain general wellness. Twine sees about 85 percent of its enrolled employees active in the platform monthly, with about 90 percent reaching their targets in 90 days.

A 2016 study in the American Journal of Managed Care shows that patients with diabetes, hypertension, and high cholesterol who began adhering to their treatment plans improved health outcomes and saved roughly $5,300, $4,400, and $2,000 per year, respectively, in medical costs.

Twine currently helps health coaches increase their numbers of participants by two to three times and is now shooting for a tenfold increase, which could be “transformative” for health care, Moore says. Traditional health care systems, for instance, get about 30 percent of hypertensive patients to achieve their blood pressure targets in a year, Moore says, but Twine has up to 90 percent of employees reaching their target in a few months. “If we can help 10 times the number of people meet their goals in a fraction of the time, that would equate to hundreds of billions of dollars saved,” Moore says. “That’s game-changing.”

A 2014 study published in the journal Risk Management and Healthcare Policy found nonadherence is linked to poor therapeutic outcomes, progression of disease, and billions of dollars in annual avoidable health care costs. In the workplace, a 2016 study published in Preventing Chronic Disease found absenteeism associated with chronic disease or unhealthy lifestyles costs employers, on average, $2 billion per year.

“The data is staggering,” Moore says.

But better adherence helps. With Twine, users input health-goal information into an app on a smartphone, tablet, or laptop. Twine then automatically connects the user with a registered medical expert, such as a nurse, doctor, or wellness coach in any given network. Users can then create a supportive care network.

Say a 60-year-old user with hypertension wants to reduce their high blood pressure. In most cases, the employee works with a health coach provided by their employer to build a highly personalized health action plan that might include: when to take medications and record blood pressure, specific dietary changes — such as “skip the sausage on your breakfast sandwich” — and achievable fitness goals — such as “walk around Lincoln Park twice.” The app reminds the employee to do these things and updates progress toward those health goals. Additionally, the app automatically pulls data from wireless medical devices, such as blood-pressure monitors and glucose meters.

Importantly, Moore adds, the app analyzes the association between actions and outcomes, such as if a dietary change had any effect on blood pressure or glucose levels. “These interventions don’t always work, so it helps you prioritize and make adjustments,” Moore says.

On a web dashboard, health coaches can sort and filter the employees under their care according to adherence trends, biometric measurements, medication alerts, or other factors, in order to prioritize outreach and intervene with timely encouragement to stay on track. Each employee’s team care team member can connect directly through a feed to send secure text messages and attachments. Providers can, for instance, link up quickly via text to switch medications or change doses, based on the user’s metrics, or to schedule appointments. Loved ones can offer words of encouragement.

“Users get this support and learning embedded in their daily life,” Moore says. “The key innovation is that collaboration permeates every aspect of the platform, so that patients become the most important member of the care team.”

Twine’s story starts in the early 2000s. As a physician in residency at Johns Hopkins Hospital, Moore felt stifled by a traditional health care system, where patients with chronic diseases have brief doctor’s appointment once every few months or once per year. “[Doctors’] ability to help people follow through with successful treatments is archaic,” Moore says. “We see people in office, send them out door, and they’re on their own.”

In 2006, Moore visited the Media Lab and was “blown away” by the lab’s philosophy of innovating in every space, including health care, without restrictions. “The Media Lab mindset is about how technology and humans can work together in the best way possible, break free from the constraints of the current world, and solve the problems with an ideal approach,” he says. “For me that was refreshing.”

Moore began working with Moss and another engineer, Scott Gilroy, in the New Media Medicine group to develop technologies that could bring “science to health care delivery,” Moore says. Early ideas included artificial-intelligence characters that would issue notifications, and games that encouraged people to stick to their medications.

Soon, however, the trio settled on a prototype for Twine. For the next six years, the team piloted their platform at the Joslin Diabetes Center and other hospitals. “We produced the best hypertension and diabetes results in the world to date,” Moore says.

Armed with encouraging results, Moore and Moss launched Twine in 2013. For Moss, a veteran entrepreneur who co-founded several startups, including Bluefin Labs, which sold to Twitter in 2013, it all came down to finding the right co-founder. In Moore, Moss says, he saw an entrepreneur who was excited, energized, industrious, and passionate about making a big difference. “I got to know John well, and that was enough for me to say, ‘This is the guy I want to form a company with,’” Moss says.

Although Twine has shifted its focus to the workplace, Moore sees this market as establishing a “playbook” for scaling the technology in traditional health care systems, where it all started. “How do you price it, how do you implement it, how do you train people?” Moore says. “This is the market that’s going to demonstrate how the big health care systems can do this effectively.”