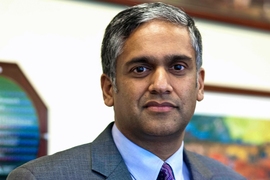 Anantha P. Chandrakasan, the Vannevar Bush Professor and head of the Department of Electrical Engineering and Computer Science (EECS), has been named dean of MIT’s School of Engineering, effective July 1. He will succeed Ian A. Waitz, the Jerome C. Hunsaker Professor of Aeronautics and Astronautics, who will become MIT’s vice chancellor.

During his six-year tenure as head of MIT’s largest academic department, Chandrakasan spearheaded a number of initiatives that opened opportunities for students, postdocs, and faculty to conduct research, explore entrepreneurial projects, and engage with EECS.

“Anantha balances his intellectual creativity and infectious energy with a remarkable ability to deeply listen to, learn from, and integrate other people’s views into a compelling vision,” MIT President L. Rafael Reif says. “In a time of significant challenges, from new pressures on federal funding to the rising global competition for top engineering talent, I am confident that Anantha will guide the School of Engineering to maintain and enhance its position of leadership. And I believe that in the process he will help make all of MIT stronger, too.”

Since joining the MIT faculty in 1994, Chandrakasan has produced a significant body of research focused largely on making electronic circuits more energy efficient. His early work on low-power chips for portable computers helped make possible the development of today’s smartphones and other mobile devices. More recently, his research has addressed the challenge of powering even more energy-constrained technologies, such as the “internet of things” that would allow many everyday devices to send and receive data via networked servers while being powered from a tiny energy source.

In an email today announcing the news to the MIT community, Provost Martin Schmidt described Chandrakasan as “a people-centered and innovative leader.” Schmidt continued, “Having observed Anantha’s collaborative approach to building a shared vision within EECS, I am excited for the opportunities that lie ahead for the School of Engineering.”

While at the helm of EECS, Chandrakasan launched a number of initiatives on behalf of the department’s students. “That’s what excites me about an administrative job,” he says. “It’s how I can enhance the student and postdoc experience. I want to create exciting opportunities for them, whether that’s in entrepreneurship, research, or maker activities. One of the key things I plan to do as dean is to connect directly with students.”

Many of these initiatives were themselves designed with student input, including the Advanced Undergraduate Research Opportunities Program, more commonly known as “SuperUROP.” This year-long independent research program, launched in EECS in 2012 and expanded to the whole School of Engineering in 2015, was shaped in response to feedback about why some EECS students were opting out of MIT’s traditional UROP program.

Chandrakasan also initiated the Rising Stars program in EECS, an annual event that convenes graduate and postdoc women for the purpose of sharing advice about the early stages of an academic career. Another program for EECS postdocs created under his direction, Postdoc6, aims to foster a sense of community for postdocs and help them develop skills that will serve their careers. Chandrakasan also helped create StartMIT, an independent activities period (IAP) class that provides students and postdocs the opportunity to learn from and interact with industrial innovation leaders.

“I tend to be a people person,” Chandrakasan says. “Of course data is always important, but it’s not where I start. I’m like the quarterback who throws it up in the end zone. I try things, and some of them don’t work, which I’m totally fine with; other things we try and then refine. But I do a lot of homework, talking to students and faculty, getting feedback, and incorporating them to improve our efforts.”

“I’m also very passionate about helping our faculty explore new research areas,” says Chandrakasan, who as department head has sought unrestricted grants and other funding to provide faculty with this flexibility. These efforts have enabled several Faculty Research Innovation Fellowships, for midcareer faculty who seek to branch out in new directions.

Chandrakasan also has a long-standing interest in creating opportunities for innovation outside the lab. He is a board member and chair of the advisory committee dealing with MIT policies for The Engine, a new accelerator launched by MIT last fall to support startup companies working on scientific and technological innovation with the potential for transformative societal impact. In the latter role, he has overseen five working groups consisting of faculty, students, postdocs, and staff with specialized expertise, and created suggestions for how the MIT community can work with The Engine.

“In building out the concept for The Engine, it was vitally important to make sure it would meet the needs of faculty, student, and alumni entrepreneurs,” says MIT Executive Vice-President and Treasurer Israel Ruiz, who helped spearhead The Engine’s development. “As the faculty lead, Anantha played an indispensable role in gathering feedback from a wide range of voices and transforming it into actionable ideas for how The Engine should work.”

Online learning is another area of interest for Chandrakasan: “I’m very excited about the whole online arena and how we can use MITx for residential education,” he says. Last fall, EECS and the Office of Digital Learning piloted a full-credit online course for a small cohort of students on campus, who gave the experience strong marks for providing flexibility and reducing stress. “I’m looking forward to working with the other department heads to see how we can get a license to experiment with these new modes of education,” he says.

At home in academia

Born in Chennai, India, Chandrakasan moved to the United States while in high school. His mother was a biochemist and Fulbright scholar, and he enjoyed spending time in her lab where she conducted research on collagen.

“I always knew I wanted to be an engineer and a professor,” he says. “My mother really inspired me into an academic career. When I entered graduate school, I knew on day one that I wanted to be academic professor.”

Chandrakasan earned his bachelor’s (1989), master’s (1990), and doctoral (1994) degrees in electrical engineering and computer science from the University of California at Berkeley — the latter two after being rejected from MIT’s graduate program, he notes with a laugh. After joining the MIT faculty, he was the director of the Microsystems Technology Laboratories (MTL) from 2006 until he became the head of EECS in 2011.

He lives in Belmont, Massachusetts, with his wife and three children, the oldest of whom graduated from MIT this year.

Even when taking on administrative roles with MTL and EECS, Chandrakasan continued his productive research career. He leads the MIT Energy-Efficient Circuits and Systems Group, whose research projects have addressed security hardware, energy harvesting, and wireless charging for the internet of things; energy-efficient circuits and systems for multimedia processing; and platforms for ultra-low-power biomedical electronics.

Chandrakasan is a recipient of awards including the 2009 Semiconductor Industry Association (SIA) University Researcher Award, the 2013 IEEE Donald O. Pederson Award in Solid-State Circuits, an honorary doctorate from KU Leuven in 2016, and the UC Berkeley EE Distinguished Alumni Award. He was also recognized as the author with the highest number of publications in the 60-year history of the IEEE International Solid-State Circuits Conference (ISSCC), the foremost global forum for presentation of advances in solid-state circuits and systems-on-a-chip. Since 2010, he served as the ISSCC Conference Chair. A fellow of IEEE, in 2015 he was elected to the National Academy of Engineering.

Prof. Anantha Chandrakasan, dean of the School of Engineering, speaks with Meera Vankipuram of The Times of India about his research, his areas of focus as dean and what sets MIT apart. Chandrakasan explains that at MIT, there is an “emphasis on translating research into solutions that have a positive impact on the world.”

Full story via Times of India →

Ian Waitz to step down as dean of engineering