3 Questions: Joseph Coughlin on innovation for an aging population

New book, “The Longevity Economy,” calls for rethinking our ideas about what the elderly can do.
Peter Dizikes | MIT News Office
Publication Date:
Press Inquiries 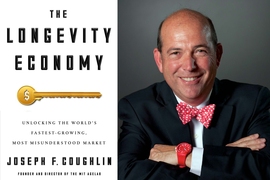 ↓ Download Image
Caption: Joseph F. Coughlin, the MIT AgeLab’s founder and director, has a new book coming out this month, “The Longevity Economy: Unlocking the World’s Fastest-growing, Most Misunderstood Market.”

Caption:
Joseph F. Coughlin, the MIT AgeLab’s founder and director, has a new book coming out this month, “The Longevity Economy: Unlocking the World’s Fastest-growing, Most Misunderstood Market.”

The populations of many developed countries are aging markedly, due to a suite of medical, social, and economic changes. Will this notable demographic trend force us to change our image of the older adults and regard them as a more vital force in society? Joseph F. Coughlin, director of the MIT AgeLab, which is part of the Center for Transportation and Logistics, hopes so. Coughlin’s new book, “The Longevity Economy,” published this week by PublicAffairs, makes a pointed call for companies and policymakers to expand their ideas about what seniors can and want to do in life. MIT News sat down with Coughlin to talk about innovation for an aging population.

Q: Your new book, “The Longevity Economy,” makes the case that we’ve developed misleading social narratives about aging. What do you mean by that?

A: One of the oldest and most powerful innovations in humankind is the story: It shapes how we view the world, it powers causality, it helps us make sense of what we do. We have this story, which itself is only about 100 years old, that birthdays predict everything, that at a certain age you retire, hold back from life, and don’t do certain things.

But rather than continuing to believe this old story, I say, let’s find out how technology is going to extend our ability to stay mobile and connected — to activate the talent and knowledge of our growing older population. Transportation technologies, for instance, are only as good as where you can go, what things there are to do — and that means not just going to the doctor’s office and grocery store, but visiting friends and grandchildren, working if you want to, or volunteering with passion and purpose.

The longevity economy is not just about the money to be made, but the reality that after about age 65, we run out of narrative. We may walk a child down the aisle or go on a cruise ship or play a bad round of golf, but after 65, society says, “You’re done.” That’s the story we’re told, but in reality, at 65, you’re very likely to make it not just to 85, but further. That’s 8,000 days! That’s roughly the same amount of time an MIT undergraduate spends from birth to graduation. Our challenge is to ensure quality of life, for a century of life.

In many ways the Baby Boomers are largely to blame, and I’m one of them myself — one of those 76 million people who seemed like they’d be young forever. They trained companies, researchers, and designers to believe the 18-35 age range is the only one worth worrying about in order to get consumers hooked for life on their products and ideas. Well, guess what? The Boomers are now inheriting what they created, at the very moment when we need to think of new products, technologies, services, and experiences for the later age ranges.

Q: Okay, more specifically, what are the problems with our current products for the elderly?

A: Whenever you start a research program around aging, it always devolves into falls, pills, and reminder systems. The instinct is always to “solve” the problem of aging. And that’s a worthy and necessary goal for a part of the population, part of the time. But it’s incomplete: Older adults are people first, not a puzzle to be solved. It is not until very recently that we’ve begun to think beyond medicalized technologies that beep, buzz, and badger us, to consider things that may connect you with a family member or a more extended social network. Think about the internet of things: We have houses that are aware of our well-being, systems making sure we haven’t fallen, and toilets talking about what we ate. How about connecting some of those things to social networks or friends and family, so that a grandchild wants to know my cookie recipe, not just whether or not I took my beta blocker?

Take personal emergency response systems, such as those necklaces with an emergency call button. As a technology, they are well-meaning, virtuous, cheap, and easy-to-use, but the penetration rate is just 2 percent among the 65-plus. In the U.K. with the National Health Service paying for them, the penetration rate is still a low 16 percent. What we’re selling is an image no one wants.

At the MIT AgeLab, we’ve learned to ask questions beyond “what’s good for you” to understand the new motivations in old age. We [should think] about fun, about learning for a lifetime. One thing about the study of longevity that MIT is profoundly qualified for is that it’s interdiciplinary. You need to have technologists work with artists to create style in products for the aging, and they have to work with the business people to get it out of the lab and into your living room.

Q: And yet there is big money to be made from retirement communities and lifestyles which, in many ways, reinforce the idea that the elderly are not active, as you observe in a chapter of your book that is set in Florida. So what’s wrong with this segment of the market for the aging?

A: I probably will never be allowed back in Florida, as much as I love the state. But even if you have money and health, our outdated narrative says, “You’ve retired now. It’s time to leave. And you can have as much fun as you want, because you earned it. But still, you’re cut off.” Essentially you’re being told you’ve earned the reward of being segregated from the rest of society. On a moral level I don’t think that’s appropriate. I do, however, completely understand why people double down on the idea of retirement and move to age-segregated communities. It’s because there’s no narrative competition in how we think about later life.

But that’s already changing, and practically speaking, it couldn’t come soon enough.  Those people we are sending away in retirement are taking away what one of my colleagues terms “lost knowledge.” For example, computer systems we’re trying to protect are written in languages you only learned if you were in school in the 1970s. Or, in major companies and government, people who have the contacts with clients and best knowledge are walking out the door. That’s not just bad politics and policy, that’s bad economics. And we find when people don’t wake up with a purpose, it’s not good for their health. It’s not good for individuals, and it’s not good for families.

We’re entering a moment when all that can change. That vision of retiring and no longer participating is often not fair to all that talent. What I’m saying is the longevity economy is about activating the full life span — so we can live not just longer, but better.

Joseph Coughlin, director of the MIT AgeLab, writes for Forbes about challenges facing the children of Baby Boomers, who will eventually need to care for their parents. “[W]hile the Baby Boomers may be aging, they are far from done,” writes Coughlin. “It may be our best gift to our children to develop care plans, options, savings, and innovations today to care for us tomorrow.”

In his book The Longevity Economy, MIT AgeLab director Joseph Coughlin notes that on the rare occasion that aging is discussed, views of the elderly are mostly wrong. “The main point that Coughlin is making,” writes Joshua Kim for Inside Higher Ed, is that, “[r]ather than years of decline, life after 65 (or 75 or even 85) can be full of possibility, exploration, and learning.”

Dr. Joseph Coughlin, director of the AgeLab, speaks with Today Show reporter A. Pawlowski about his new book and why females are uniquely positioned to handle life after middle age. “One of the greatest under-appreciated sources of innovation and new business may in fact be women over 50,” says Coughlin.

In an interview with Amy Crawford of the Boston Globe, Joseph Coughlin, director of the MIT AgeLab, discusses new ideas for employment and retirement as the population continues to age. “We need those 50-plus people to provide the working knowledge that keeps our organizations and systems functioning,” Coughlin says.

Joe Coughlin, director of the AgeLab, has a new book called The Longevity Economy, which examines how companies can better serve older consumers, writes Robert Powell for USA Today. “A new generation of older adults is beginning to demand far more out of later life than ever before: not just passive consumerism, but the active pursuit of meaning,” says Coughlin.

In an article for The Atlantic, Joe Coughlin, director of the AgeLab, writes that tech companies often mistakenly view older adults “as a singular, homogenous population that depends on the largesse of others to survive because it can’t pro­vide for itself.” If companies treated older adults like they treat other consumers, they could live not only longer lives, but better lives, suggests Coughlin.

Joe Coughlin, director of the AgeLab, writes about the need to rethink how people live as they age. “An older America done right will improve quality of life across the board. After all, if we’re lucky, the future of old age is the future for everyone,” said Coughlin in Time magazine.

Joseph Coughlin, director of the AgeLab, writes for Forbes that older female consumers are powerful, yet products geared toward them are poorly marketed. “The insights that occur to this particular consumer group are powerful enough to raze major companies to the ground — and raise new ones out of the rubble,” writes Coughlin.