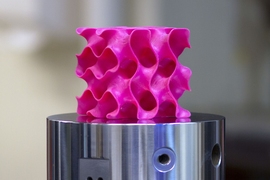 ↓ Download Image
Caption: 3-D-printed gyroid models such as this one were used to test the strength and mechanical properties of a new lightweight material. 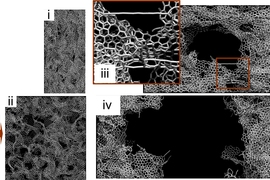 Caption:
3-D-printed gyroid models such as this one were used to test the strength and mechanical properties of a new lightweight material.

Caption:
This illustration shows the simulation results of tensile and compression tests on 3-D graphene.

A team of researchers at MIT has designed one of the strongest lightweight materials known, by compressing and fusing flakes of graphene, a two-dimensional form of carbon. The new material, a sponge-like configuration with a density of just 5 percent, can have a strength 10 times that of steel.

The new findings show that the crucial aspect of the new 3-D forms has more to do with their unusual geometrical configuration than with the material itself, which suggests that similar strong, lightweight materials could be made from a variety of materials by creating similar geometric features.

The findings are being reported today in the journal Science Advances, in a paper by Markus Buehler, the head of MIT’s Department of Civil and Environmental Engineering (CEE) and the McAfee Professor of Engineering; Zhao Qin, a CEE research scientist; Gang Seob Jung, a graduate student; and Min Jeong Kang MEng ’16, a recent graduate.

A team of MIT engineers has successfully designed a new 3-D material with five percent the density of steel and ten times the strength, making it one of the strongest lightweight materials known.

Other groups had suggested the possibility of such lightweight structures, but lab experiments so far had failed to match predictions, with some results exhibiting several orders of magnitude less strength than expected. The MIT team decided to solve the mystery by analyzing the material’s behavior down to the level of individual atoms within the structure. They were able to produce a mathematical framework that very closely matches experimental observations.

Two-dimensional materials — basically flat sheets that are just one atom in thickness but can be indefinitely large in the other dimensions — have exceptional strength as well as unique electrical properties. But because of their extraordinary thinness, “they are not very useful for making 3-D materials that could be used in vehicles, buildings, or devices,” Buehler says. “What we’ve done is to realize the wish of translating these 2-D materials into three-dimensional structures.”

The team was able to compress small flakes of graphene using a combination of heat and pressure. This process produced a strong, stable structure whose form resembles that of some corals and microscopic creatures called diatoms. These shapes, which have an enormous surface area in proportion to their volume, proved to be remarkably strong. “Once we created these 3-D structures, we wanted to see what’s the limit — what’s the strongest possible material we can produce,” says Qin. To do that, they created a variety of 3-D models and then subjected them to various tests. In computational simulations, which mimic the loading conditions in the tensile and compression tests performed in a tensile loading machine, “one of our samples has 5 percent the density of steel, but 10 times the strength,” Qin says.

Buehler says that what happens to their 3-D graphene material, which is composed of curved surfaces under deformation, resembles what would happen with sheets of paper. Paper has little strength along its length and width, and can be easily crumpled up. But when made into certain shapes, for example rolled into a tube, suddenly the strength along the length of the tube is much greater and can support substantial weight. Similarly, the geometric arrangement of the graphene flakes after treatment naturally forms a very strong configuration.

The new configurations have been made in the lab using a high-resolution, multimaterial 3-D printer. They were mechanically tested for their tensile and compressive properties, and their mechanical response under loading was simulated using the team’s theoretical models. The results from the experiments and simulations matched accurately.

The new, more accurate results, based on atomistic computational modeling by the MIT team, ruled out a possibility proposed previously by other teams: that it might be possible to make 3-D graphene structures so lightweight that they would actually be lighter than air, and could be used as a durable replacement for helium in balloons. The current work shows, however, that at such low densities, the material would not have sufficient strength and would collapse from the surrounding air pressure.

But many other possible applications of the material could eventually be feasible, the researchers say, for uses that require a combination of extreme strength and light weight. “You could either use the real graphene material or use the geometry we discovered with other materials, like polymers or metals,” Buehler says, to gain similar advantages of strength combined with advantages in cost, processing methods, or other material properties (such as transparency or electrical conductivity).

“You can replace the material itself with anything,” Buehler says. “The geometry is the dominant factor. It’s something that has the potential to transfer to many things.”

The unusual geometric shapes that graphene naturally forms under heat and pressure look something like a Nerf ball — round, but full of holes. These shapes, known as gyroids, are so complex that “actually making them using conventional manufacturing methods is probably impossible,” Buehler says. The team used 3-D-printed models of the structure, enlarged to thousands of times their natural size, for testing purposes.

For actual synthesis, the researchers say, one possibility is to use the polymer or metal particles as templates, coat them with graphene by chemical vapor deposit before heat and pressure treatments, and then chemically or physically remove the polymer or metal phases to leave 3-D graphene in the gyroid form. For this, the computational model given in the current study provides a guideline to evaluate the mechanical quality of the synthesis output.

The same geometry could even be applied to large-scale structural materials, they suggest. For example, concrete for a structure such as a bridge might be made with this porous geometry, providing comparable strength with a fraction of the weight. This approach would have the additional benefit of providing good insulation because of the large amount of enclosed airspace within it.

Because the shape is riddled with very tiny pore spaces, the material might also find application in some filtration systems, for either water or chemical processing. The mathematical descriptions derived by this group could facilitate the development of a variety of applications, the researchers say.

“This is an inspiring study on the mechanics of 3-D graphene assembly,” says Huajian Gao, a professor of engineering at Brown University, who was not involved in this work. “The combination of computational modeling with 3-D-printing-based experiments used in this paper is a powerful new approach in engineering research. It is impressive to see the scaling laws initially derived from nanoscale simulations resurface in macroscale experiments under the help of 3-D printing,” he says.

This work, Gao says, “shows a promising direction of bringing the strength of 2-D materials and the power of material architecture design together.”

The research was supported by the Office of Naval Research, the Department of Defense Multidisciplinary University Research Initiative, and BASF-North American Center for Research on Advanced Materials.

MIT researchers have created a new strong, yet lightweight material by using a 3-D printer to fuse flakes of graphene into a sponge-like object, reports Nick Kwek for BBC News. “The newfangled product could be used in the construction of airplanes or buildings,” says Kwek.

MIT researchers have used computer models to turn flakes of graphene into 3-D structures, creating one of lightest, strongest materials, writes Nicola Davison for CNN. "Once they combine and fuse together, all the flakes contribute to the strength of the overall structure," research scientist Zhao Qin explains.

Researchers at MIT have fused flakes of graphene into a sponge-like shape, creating one of the strongest lightweight materials, writes James Temperton for Wired. Flakes of graphene were compressed using heat and pressure, then 3-D printers were used to create a “strong, stable structure similar to some corals” for stress tests.

MIT researchers have developed a new ultra-light material that is ten times stronger than steel, reports Tia Ghose for CBS News. Ghose explains that in the future, the material could potentially be used to build bridges, “which would be ultrastrong, lightweight, and insulated against heat and cold because of all the myriad air pockets in the material.”

MIT researchers have designed a strong, lightweight material that is ten times stronger than steel, reports Katharine Schwab for Co.Design. “If we can produce the material in big amounts, we can use that to somehow substitute some of the steel used for construction,” says research scientist Zhao Qin.

By fusing graphene into a porous 3-D form, MIT researchers have created a strong, lightweight material, writes Brooks Hays for UPI. “The findings suggest a 3D material's tensile and compressive properties are dependent on the geometry of its structure, not the strength of the 2D material from which it is derived,” explains Hays.