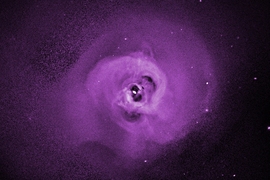 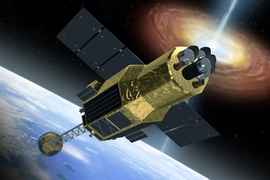 At the center of the Perseus galaxy cluster — a swarm of thousands of galaxies that spans 2 million light years across and is one of the most massive known objects in the universe — a black hole is attempting to stir things up, blowing giant bubbles and jets and ripples of gas out into the galactic plasma.

However, scientists from the Hitomi Collaboration, including researchers from MIT, have found that, despite the black hole’s efforts, the core of the cluster is surprisingly “quiet,” meaning the plasma surrounding the central black hole is not swirling around nearly as fast as scientists had suspected.

To be exact, the scientists observed that the gas at the center of the galaxy cluster is moving at a velocity of 164 kilometers per second, or about 366,000 miles per hour — positively pokey compared to the galaxies and stars within the cluster, which are thought to travel at least 10 times as fast.

“You’d expect the gas in this region to be quite stirred up, but it’s not,” says Eric Miller, a research scientist at MIT’s Kavli Institute for Astrophysics and Space Research. “It’s really kind of quiet compared to how much disorder we see coming from the black hole.”

The team’s results are published today in Nature. In addition to Miller, co-authors include MIT Kavli Institute Associate Director Mark Bautz and MIT postdoc Esra Bulbul, along with scientists from 70 other institutions, as part of the Hitomi Collaboration. The results are based on data taken by an instrument that was designed in part by co-authors and MIT alumni Richard Kelley PhD ’82, Hitomi’s U.S. principal investigator, and project scientist Robert Petre PhD ’82.

The international team measured the speed of the gas at the center of the Perseus cluster using X-ray data collected by the Hitomi satellite, a joint mission that was launched in February by NASA and the Japan Aerospace Exploration Agency (JAXA).

Hitomi was designed as a high-resolution X-ray telescope, capable of observing the most extreme processes in the universe, including exploding stars, supermassive black holes, and galaxy clusters such as Perseus — extremely high-temperature phenomena that can only be seen in the X-ray region of the electromagnetic spectrum. Scientists even planned to point the telescope toward suspected regions of dark matter.

Hitomi was meant to explore the universe for at least three years. But just a month after it launched, the satellite spun out of control, jettisoning its two solar panels, and with them, its only source of power. Scientists soon lost contact with Hitomi, and on April 28, JAXA ended its efforts to recover the satellite.

“Everyone was numb for several days,” Miller recalls.

However, before its demise, the satellite was able to collect a month’s worth of data as it pointed toward its first target, the Perseus cluster, 250 million light years from Earth. During that month, the satellite picked up incoming X-rays at various wavelengths, with higher precision than any previous X-ray detectors.

The X-ray data formed a spectrum that peaked at certain wavelengths, indicating the presence of particular elements, such as iron and hydrogen. Such a spectrum can reveal the type and abundance of elements in a cluster’s interstellar medium, which scientists can then use to estimate the temperatures within that medium.

In this case, the Hitomi Collaboration used the X-ray spectrum to estimate the velocity of gas at the center of the Perseus cluster — a measure that may help scientists understand how black holes affect their immediate surroundings, and how galaxy clusters form.

The team detected a spike in the X-ray spectrum that was broader than expected. If that spike were simply a vertical line, it would indicate the gas giving off the X-rays was relatively still. But because the spike was relatively broad, scientists interpreted the signal as a Doppler-like effect, produced by gas that was on the move.

By studying this broad signal further, the team was able to estimate that the speed of the gas at the core of the cluster was 164 kilometers per second — slower than expected, given the bubbles and jets of gas that the central black hole is generating, according to previous observations. Bautz says that this relatively quiet atmosphere may mean that the gas, or plasma, is thicker than scientists thought, and that it may be less easy to push around as a result.

“It is somewhat surprising that it is so quiet,” Bautz says. “We don’t know how this works in detail. One possibility is that the plasma is relatively viscous, more like a pot of boiling oatmeal than a pot of boiling water. This characteristic of the cluster plasma, namely its viscosity, is something we had almost no idea about before Hitomi.”

William Forman, an astrophysicst at the Harvard-Smithsonian Center for Astrophysics, says that since the 1960s, the sensitivity of X-ray telescopes such has the Chandra X-ray Observatory has vastly improved, bringing “a revolution in understanding the high energy universe. … With Hitomi, we are on the verge of a second revolution.”

“We are on the verge of measuring the velocity structure in gas-rich systems, from galaxies to groups to clusters,” says Forman, who was not involved in the research. “The properties of the cluster plasma have puzzled astrophysicists for more than a quarter of a century. Future missions will complete the revolution that we just glimpse through Hitomi.”

While the satellite itself has gone irreparably dark, scientists may still make new discoveries in the limited amount of data Hitomi was able to collect. Miller says the team plans to make the most of the data, in hopes of uncovering new information on the behavior of black holes, the origin of galaxy clusters, and even the existence of dark matter.

“We took this data because it was something we could do to demonstrate the capability in the instrument, but there was a lot more that was supposed to be done over the long haul, which unfortunately we don’t have,” Miller says. “On the plus side, we got some really great data, and this shows the community the need to try to fly one of these [X-ray missions] successfully.”

This research was supported, in part, by NASA and JAXA.