New system from MIT can identify how much power is being used by each device in a household.
David L. Chandler | MIT News Office
Publication Date:
Press Inquiries 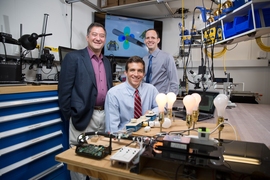 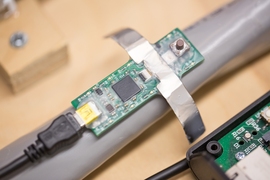 ↓ Download Image
Caption: Researchers at MIT have developed a device and software that could figure out exactly how much power is being used by every appliance, lighting fixture, and device in a home, with pinpoint accuracy and at low cost.

Caption:
Researchers at MIT have developed a device and software that could figure out exactly how much power is being used by every appliance, lighting fixture, and device in a home, with pinpoint accuracy and at low cost.
Credits:
Photo: Bryce Vickmark

If you want to save on your monthly electric bill and reduce your greenhouse gas emissions at the same time, you might buy a new, energy-efficient refrigerator. Or water heater. Or clothes dryer. But if you can only replace one of these, which will give you the biggest payback?

You could try to figure that out by comparing the energy-use labels from your existing appliances with those of the models you might purchase — if you still have your old labels. Even then, the numbers may differ significantly from your actual usage, depending on factors such as age, condition, and your local climate. But soon, there could be a much easier way to figure out exactly how much power is being used by every appliance, lighting fixture, and device in your home, with pinpoint accuracy and at low cost, thanks to devices and software developed by researchers at MIT.

The team’s findings, developed over several years of intensive research, are described in a series of papers, including one published this week in the IEEE Sensors Journal, in a paper by MIT Professor of Electrical Engineering Steven Leeb and recent graduates David Lawrence MEng ’16 and John Donnal PhD ’16. Another paper from the team, which also includes as co-author James Paris PhD ’13, is still in press.

While many groups have worked on developing devices to monitor electricity use, the new MIT system has some key advantages over other approaches. First, it involves no complex installation: No wires need to be disconnected, and the placement of the postage-stamp-sized sensors over the incoming power line does not require any particular precision — the system is designed to be self-calibrating. Second, because it samples data very quickly, the sensors can pick up enough detailed information about spikes and patterns in the voltage and current that the system can, thanks to dedicated software, tell the difference between every different kind of light, motor, and other device in the home and show exactly which ones go on and off, at what times.

Perhaps most significantly, the system is designed so that all of the detailed information stays right inside the user’s own home, eliminating concerns about privacy that potential users may have when considering power-monitoring systems. The detailed analysis, including the potential for specialized analysis based on an individual user’s specific needs or interests, can be provided by customized apps that can be developed using the MIT team’s system.

Tests of the system have showed its potential to save energy and greenhouse emissions — and even to improve safety. One installation at a military base used for training exercises revealed that large tents were being heated all day during winter months, even though they were unoccupied for most of the daytime hours — a significant waste of money and fuel (which, in a combat setting, could be an important logistical concern). Another test installation, in a home, found an anomalous voltage pattern that revealed a wiring flaw that caused some copper plumbing pipes to carry a potentially dangerous live voltage.

“For a long time, the premise has been that if we could get access to better information [about energy use], we would be able to create some significant savings,” Leeb says. He and his students have been tackling the problem for more than 10 years and bit by bit have found ways to circumvent the daunting problems involved in achieving this basic task.

First was the ability to monitor changes in voltage and current without cutting the main incoming power line to a home or business (an expensive process requiring a licensed electrician) or plugging every appliance into a special monitoring device. Other groups have attempted to use wireless sensors to pick up the very faint magnetic and electric fields near a wire, but such systems have required a complex alignment process since the fields in some places can cancel each other out. The MIT team solved the problem by using an array of five sensors, each slightly offset from the others, and a calibration system that tracks the readings from each sensor and figures out which one is positioned to give the strongest signal.

The next trick was in figuring out how to analyze the reams of data flowing in from the high-speed sensors, in order to tease out which bits correspond to current and voltage, and how that information could be used to identify “signatures” of specific appliances. This is possible because every motor or device has distinctive characteristics as to exactly how fast and how much the voltage varies, or spikes, at the moment the device switches on, or as it operates. After extensive testing in the lab, in homes, at the Fort Devens Army base outside Boston, and aboard the U.S. Coast Guard cutter Spencer, the team was able to develop a catalog of such signatures, to identify each kind of electrical load.

And finally, given the prodigious amount of raw data generated by the system, the team had to figure out how to extract the useful information and display it in a way that would make it easy for people to make decisions about energy investments. They developed an interface that allows users to “zoom in” on specific time segments, revealing enough data to tell when a refrigerator turns on or off, or goes into its defrost cycle, or how often a water heater is switching on and off during the day.

“A bunch of major players have gotten into, and out of, this field,” says Leeb, including giants like Google and Microsoft. But now, he says, the MIT team has solved the key issues and come up with a practical and very powerful system. One of the major insights they had was that keeping most of the data within the home and sending only small subsets out into the cloud for processing solved two problems at once: It eliminated the privacy concerns of using such a system, and it eliminated the huge bandwidth and data transmission costs that would be required if the raw data was sent to a central facility.

Once the system is developed into a commercial product, Leeb says, it should cost only about $25 to $30 per home. “We’re trying to lower the barriers to installation,” says co-author John Donnal, and this noncontact sensor is simple enough for most home users to install on their own. “It just goes on with a zip tie,” he says.

William Singleton, an engineer at the U.S. Army Fort Devens Base Camp Integration Laboratory, who was not involved in this research, says this work “is an excellent example of how theoretical scientific and mathematical principles can be brought to bear on real world, practical, problem-solving applications.” By using the MIT team’s sensing system, he says, “significant potential savings in fuel, water, and equipment maintenance can be realized. This will provide increased options for the battlefield commander in accomplishing his mission, reduce the overall base camp logistics footprint, and ultimately save lives of warfighters involved in base camp sustainment and resupply.”

The research was supported in part by the Grainger Foundation, the Office of Naval Research Neptune program, the MIT Skoltech Initiative, and the MIT and Masdar Institute Cooperative Program.

Stephanie Mlot reports for FOX News that MIT researchers have developed a new portable system that can monitor energy usage, and could be useful for both residential and military applications. The system could “not only generate major savings in fuel or power,” Mlot writes, “but it may also safeguard soldiers responsible for base resupply.”