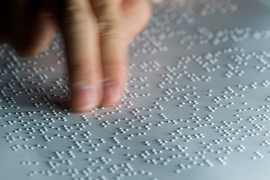 MIT researchers have developed a low-power chip for processing 3-D camera data that could help visually impaired people navigate their environments. The chip consumes only one-thousandth as much power as a conventional computer processor executing the same algorithms.

Using their chip, the researchers also built a prototype of a complete navigation system for the visually impaired. About the size of a binoculars case and similarly worn around the neck, the system uses an experimental 3-D camera from Texas Instruments. The user carries a mechanical Braille interface developed at MIT’s Computer Science and Artificial Intelligence Laboratory (CSAIL), which conveys information about the distance to the nearest obstacle in the direction the user is moving.

The researchers reported the new chip and the prototype navigation system in a paper presented earlier this week at the International Solid-State Circuits Conference in San Francisco.

“There was some prior work on this type of system, but the problem was that the systems were too bulky, because they require tons of different processing,” says Dongsuk Jeon, a postdoc at MIT’s Microsystems Research Laboratories (MTL) when the work was done who joined the faculty of Seoul National University in South Korea this year. “We wanted to miniaturize this system and realized that it is critical to make a very tiny chip that saves power but still provides enough computational power.”

In work sponsored by the Andrea Bocelli Foundation, which was founded by the blind singer Andrea Bocelli, Rus’ group had developed an algorithm for converting 3-D camera data into useful navigation aids. The output of any 3-D camera can be interpreted as a 3-D representation called a “point cloud,” which depicts the spatial locations of individual points on the surfaces of objects. The Rus group’s algorithm clustered points together to identify flat surfaces in the scene, then measured the unobstructed walking distance in multiple directions.

This is computationally efficient, but it requires frequent requests to a chip’s main memory bank. Because the algorithm doesn’t know in advance which direction it will move through the point cloud, it can’t reliably preload the data it will need into its small working-memory bank.

This and similar tricks drastically reduced the chip’s power consumption. But the data-processing chip isn’t the component of the navigation system that consumes the most energy; the 3-D camera is. So the chip also includes a circuit that quickly and coarsely compares each new frame of data captured by the camera with the one that immediately preceded it. If little changes over successive frames, that’s a good indication that the user is still; the chip sends a signal to the camera, which can lower its frame rate, saving power.

Although the prototype navigation system is less obtrusive than its predecessors, it should be possible to miniaturize it even further. Currently, one of its biggest components is a heat dissipation device atop a second chip that converts the camera’s output into a point cloud. Adding the conversion algorithm to the data-processing chip should have a negligible effect on its power consumption but would significantly reduce the size of the system’s electronics.

"There are many problems that have been solved for visually impaired people, but a real one that is still open is navigating and walking alone in a safe way, going around in a big city,” said Bocelli, at an event in Milan during which the new system was demonstrated. “I've seen today a big step toward the solution to the problem. Together we will soon cross the great ocean. We will soon have a small device in our pocket to help us in walking in a city, going everywhere alone.”

In addition to the Andrea Bocelli Foundation, the work was cosponsored by Texas Instruments, and the prototype chips were manufactured through the Taiwan Semiconductor Manufacturing Company’s University Shuttle Program.

Boston.com reporter Hilary Sargent writes that MIT researchers have developed a new device that could help guide the visually impaired. Sargent explains that a prototype system the researchers developed “is about the size of a binoculars case and is designed to be worn around someone’s neck.”