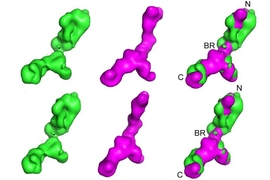 ↓ Download Image
Caption: These images produced by X-ray scattering analysis show the normal tropoelestin molecule (in green), the genetically modified version created by the researchers (in magenta), and a combined view to emphasize the areas where the two versions differ. The team found that the modified version was significantly weaker than the natural version, and used this analysis to help understand the way these molecules move and self-assemble to form elastin, an important body tissue with very elastic properties.
Credits: Courtesy of the researchers 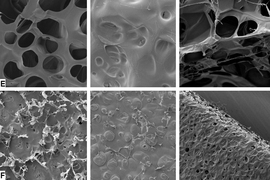 ↓ Download Image
Caption: This scanning electron microscope images show the detailed inner structure of hydrogels made from tropoelastin, from different parts of the structure. From right to left, you can see the top, bottom and edges of the material.
Credits: Courtesy of the researchers

Caption:
These images produced by X-ray scattering analysis show the normal tropoelestin molecule (in green), the genetically modified version created by the researchers (in magenta), and a combined view to emphasize the areas where the two versions differ. The team found that the modified version was significantly weaker than the natural version, and used this analysis to help understand the way these molecules move and self-assemble to form elastin, an important body tissue with very elastic properties.
Credits:
Courtesy of the researchers

Caption:
This scanning electron microscope images show the detailed inner structure of hydrogels made from tropoelastin, from different parts of the structure. From right to left, you can see the top, bottom and edges of the material.

Elastin is a crucial building block in our bodies. Its flexibility allows skin to stretch and twist, blood vessels to expand and relax with every heartbeat, and lungs to swell and contract with each breath. But exactly how this protein-based tissue assembles itself to achieve this flexibility remained an unsolved question — until now.

This material has a remarkable combination of flexibility and durability: Elastin is one of the body’s most long-lasting component proteins, with an average survival time comparable to a human lifespan. During that time, the elastin in a blood vessel, for example, will have gone through an estimated 2 billion cycles of pulsation.

A team of researchers at MIT, in Australia, and in the U.K. has carried out an analysis that reveals the details of a hierarchical structure of scissor-shaped molecules that gives elastin its remarkable properties. The findings were published this week in the journal Science Advances, in a paper by postdoc Giselle Yeo and professor Anthony Weiss of the University of Sydney, Australia; MIT graduate student Anna Tarakanova and McAfee Professor of Engineering Markus Buehler; and two others.

Elastin tissues are made up of molecules of a protein called tropoelastin, which are strung together in a chain-like structure, and which Weiss and his team have been studying in the lab for many years. In this work, they collaborated with Buehler and Tarakanova at MIT, who have specialized in determining the molecular structure of biological materials through highly detailed atomic-scale modeling. Combining the computational and laboratory approaches provided insights that neither method could have yielded alone, team members say.

While the study of elastin has been going on for a long time, Weiss says “this particular paper is exciting for us on three levels.” First, thanks to synchrotron imaging done by team member Clair Baldock at the University of Manchester in the U.K., the research revealed the shape and structure of the basic tropoelastin molecules. But these were snapshots — still images that could not illuminate the complex dynamics of the material as it forms large structures that can stretch and rebound. Those dynamic effects were revealed through the combination of computer modeling and laboratory work. “It’s really by combining forces with these three groups” that the details were pieced together, Weiss says.

Tarakanova explains that in Buehler’s lab, “we use modeling to study materials at different length scales, and for elastin, that is very useful, because we can study details at the submolecular scale and build up to the scale of a single molecule.” By examining the relationship of structure across these different scales, “we could predict the dynamics of the molecule.”

The dynamics turned out to be complex and surprising, Weiss says. “It’s almost like a dance the molecule does, with a scissor twist, like a ballerina,” with legs opening and closing repeatedly. Then, the scissor-like appendages of one molecule naturally lock onto the narrow end of another molecule, like one ballerina riding piggyback on top of the next. This process continues, building up long, chain-like structures.

These long chains weave together to produce the flexible tissues that our lives depend on — including skin, lungs, and blood vessels. These structures “assemble very rapidly,” Weiss says, and this new research “helps us understand this assembly process.”

The team tested the way this flexibility comes about by genetically modifying the protein and comparing the characteristics of the modified and natural versions. They revived a short segment of the elastin gene that has become dormant in humans, which changes part of the protein’s configuration. They found that even though the changes were minor and only affected one part of the structure, the results were dramatic. The modified version had a stiff region that altered the molecule’s movements and weakened it. This helped to confirm that certain specific parts of the molecule, including one with a helical structure, were essential contributors to the material’s natural flexibility.

That insight in itself could prove useful medically, the team says, as it could explain why blood vessels become weakened in people with certain disease conditions, perhaps as a result of a mutation in that gene.

While the findings specifically relate to one particular protein and the tissues it forms, the team says the research may help in understanding a variety of other flexible biological tissues and how they work. “The integration of experiment and modeling in identifying how the molecular structure endows materials with exceptional durability and elasticity, and studying how these materials fail under extreme conditions yields important insights for the design of new materials that replace those in our body, or for materials that we can use in engineering applications in which durable materials are critical,” says Buehler, who is head of the MIT Department of Civil and Environmental Engineering.

“We are excited about the new opportunities that arise from this collaboration and the potential for future work,” Buehler says, “because designing materials that last for many decades without breaking down is a major engineering challenge that nature has beautifully accomplished, and on which we hope to build.”

“This is fascinating work,” says Chwee Tak Lim, professor of biomedical engineering at the National University of Singapore, who was not involved in this research. Lim says “I believe this work is significant in that it not only enables us to better understand the requisite conditions for the formation of ‘healthy’ elastins, whether in our body or in producing them for biomaterial applications, but also provides insights into certain tissue dysfunctions arising from elastin mutations.”

The research team, which also included Steven Wise of the Heart Research Institute in Sydney, was supported, in part, by grants from the Australian Research Council; the National Institutes of Health; the Wellcome Trust; the Biotechnology and Biological Sciences Research Council, UK; and the U.S. Office of Naval Research.