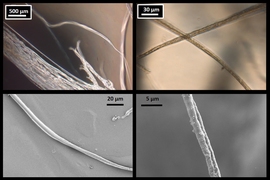 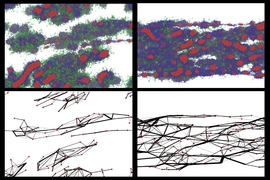 ↓ Download Image
Caption: Molecular-level simulations of different lengths of silk molecules called fibroins, after being exposed to flow to simulate a spider's spinning process, reveal the key importance of the length of the molecular chains in achieving well-bonded fibers. At left, the fibroins have a length of 4 units, and, at right, 12 units. Below each “snapshot” of the simulation is a diagram showing the connections between units. The longer chains produce a much stronger fiber.
Credits: Courtesy of the researchers

Caption:
Molecular-level simulations of different lengths of silk molecules called fibroins, after being exposed to flow to simulate a spider's spinning process, reveal the key importance of the length of the molecular chains in achieving well-bonded fibers. At left, the fibroins have a length of 4 units, and, at right, 12 units. Below each “snapshot” of the simulation is a diagram showing the connections between units. The longer chains produce a much stronger fiber.
Credits:
Courtesy of the researchers

After years of research decoding the complex structure and production of spider silk, researchers have now succeeded in producing samples of this exceptionally strong and resilient material in the laboratory. The new development could lead to a variety of biomedical materials — from sutures to scaffolding for organ replacements — made from synthesized silk with properties specifically tuned for their intended uses.

The findings are published this week in the journal Nature Communications by MIT professor of civil and environmental engineering (CEE) Markus Buehler, postdocs Shangchao Lin and Seunghwa Ryu, and others at MIT, Tufts University, Boston University, and in Germany, Italy, and the U.K.

The research, which involved a combination of simulations and experiments, paves the way for “creating new fibers with improved characteristics” beyond those of natural silk, says Buehler, who is also the department head in CEE. The work, he says, should make it possible to design fibers with specific characteristics of strength, elasticity, and toughness.

The new synthetic fibers’ proteins — the basic building blocks of the material — were created by genetically modifying bacteria to make the proteins normally produced by spiders. These proteins were then extruded through microfluidic channels designed to mimic the effect of an organ, called a spinneret, that spiders use to produce natural silk fibers.

While spider silk has long been recognized as among the strongest known materials, spiders cannot practically be bred to produce harvestable fibers — so this new approach to producing a synthetic, yet spider-like, silk could make such strong and flexible fibers available for biomedical applications. By their nature, spider silks are fully biocompatible and can be used in the body without risk of adverse reactions; they are ultimately simply absorbed by the body.

The researchers’ “spinning” process, in which the constituent proteins dissolved in water are extruded through a tiny opening at a controlled rate, causes the molecules to line up in a way that produces strong fibers. The molecules themselves are a mixture of hydrophobic and hydrophilic compounds, blended so as to naturally align to form fibers much stronger than their constituent parts. “When you spin it, you create very strong bonds in one direction,” Buehler says.

The team found that getting the blend of proteins right was crucial. “We found out that when there was a high proportion of hydrophobic proteins, it would not spin any fibers, it would just make an ugly mass,” says Ryu, who worked on the project as a postdoc at MIT and is now an assistant professor at the Korea Advanced Institute of Science and Technology. “We had to find the right mix” in order to produce strong fibers, he says.

This project represents the first use of simulations to understand silk production at the molecular level. “Simulation is critical,” Buehler explains: Actually synthesizing a protein can take several months; if that protein doesn’t turn out to have exactly the right properties, the process would have to start all over.

Using simulations makes it possible to “scan through a large range of proteins until we see changes in the fiber stiffness,” and then home in on those compounds, says Lin, who worked on the project as a postdoc at MIT and is now an assistant professor at Florida State University.

Controlling the properties directly could ultimately make it possible to create fibers that are even stronger than natural ones, because engineers can choose characteristics for a particular use. For example, while spiders may need elasticity so their webs can capture insects without breaking, those designing fibers for use as surgical sutures would need more strength and less stretchiness. “Silk doesn’t give us that choice,” Buehler says.

The processing of the material can be done at room temperature using water-based solutions, so scaling up manufacturing should be relatively easy, team members say. So far, the fibers they have made in the lab are not as strong as natural spider silk, but now that the basic process has been established, it should be possible to fine-tune the materials and improve its strength, they say.

“Our goal is to improve the strength, elasticity, and toughness of artificially spun fibers by borrowing bright ideas from nature,” Lin says.  This study could inspire the development of new synthetic fibers — or any materials requiring enhanced properties, such as in electrical and thermal transport, in a certain direction.

“This is an amazing piece of work,” says Huajian Gao, a professor of engineering at Brown University who was not involved in this research. “This could lead to a breakthrough that may allow us to directly explore engineering applications of silk-like materials.”

Gao adds that the team’s exploration of variations in web structure “may have practical impacts in improving the design of fiber-reinforced composites by significantly increasing their strength and robustness without increasing the weight. The impact on material innovation could be particularly important for aerospace and industrial applications, where light weight is essential.”

A team led by Professor Markus Buehler has created a device that can produce spider silk, writes Andrea Alfano for the Tech Times. Buehler explains that silk produced by this new device is, “a lot more modifiable than spider silk,” and could be used to create synthetic organs.

How spider webs achieve their strength