MIT researchers look to the future 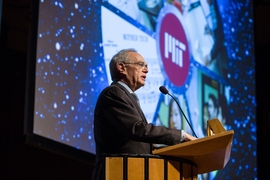 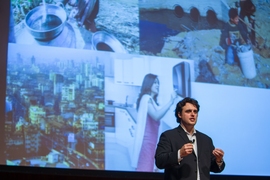 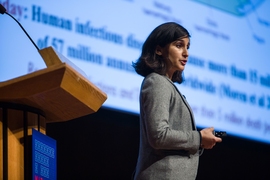 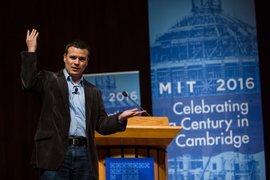 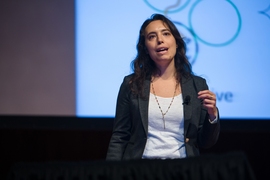 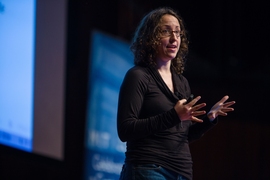 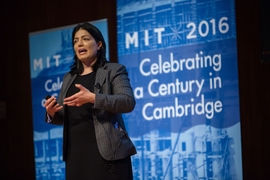 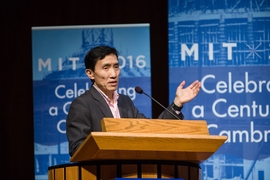 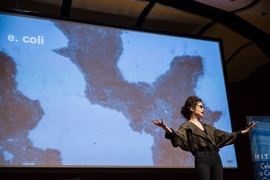 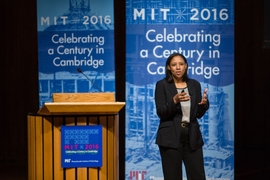 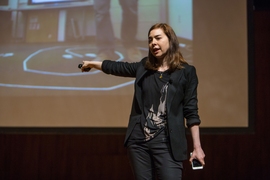 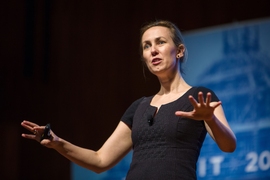 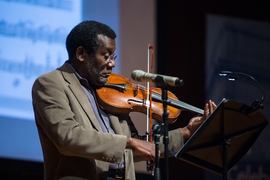 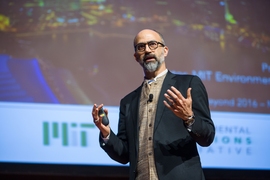 Strung together by a series of clever video clips showing the MIT campus being explored by flying drones, a hopping “super mini cheetah” robot, Tim the Beaver, and assorted other guides, a symposium at Kresge auditorium on Tuesday provided an array of brief talks that gave an inspiring and extraordinarily varied sampling of the research and creativity to be found on every corner of the campus.

The event was one of several celebrations marking the 100th anniversary of MIT’s move to its Cambridge campus; the Institute relocated from Boston in 1916 onto newly reclaimed land that had been a tidal mud flat.

The symposium, said MIT President L. Rafael Reif in his introduction to the event, was an attempt to convey the breadth of interests and work in the MIT community, made up of people who are “so intense, so passionate, so driven, so curious.” Every top research institution has a handful of those kinds of people, he said, but “at MIT, everybody is like that.” They have “a boldness, a persistence, a desire to have an impact, and a passion to do good for the world.”

A baker’s dozen of faculty from every part of the campus, representing a wide variety of disciplines, described their work and their vision, and the special qualities of research at MIT, where a deliberately interconnected campus encourages collaborations and interdisciplinary research.

Amos Winter, an assistant professor of mechanical engineering, described a series of projects aimed at meeting the particular needs of people in the developing world, from energy to transportation to prosthetics. People in these emerging economies need high-quality products at affordable prices, and their needs are often quite different from those in the industrialized world, he said. For example, they require their own solar or other self-generated power in places where a reliable grid is not available. The water desalination systems Winter and his associates are working on for large regions in India are also specially designed for their environment. Based on electrodialysis — not widely used in most places — these systems are much more efficient at the low salt levels typically encountered there, as they waste far less of the water.

Among the problems faced in these developing regions, said Lydia Bourouiba, the Esther and Harold E. Edgerton Career Development Professor in civil and environmental engineering, is the emergence — and sometimes the re-emergence — of deadly infectious diseases, which many researchers had thought would be eradicated by now. Understanding these disease trends requires bridging a divide of disciplines, she said, between the microscopic study of the disease agents themselves, and the large-scale study of the economic and ecological factors that influence the way populations, and the diseases they carry, move and spread.

Other researchers described cutting-edge work taking place at MIT in a wide range of disciplines, including studying the electronic properties of whole families of newly developed two-dimensional materials such as graphene; analyzing the details of how plants harness the energy of sunlight, in order to improve our own technological versions of this process; and learning about how natural organisms such as silkworms can build structures that are incredibly strong yet lightweight. Dina Katabi, the Andrew and Erna Viterbi Professor in electrical engineering and computer science, described her team’s work on developing a kind of “X-ray vision” to make it possible to track the position and movements of people behind walls — and even their breathing and heartbeat — using only wireless technology.

Heidi Williams, the Class of 1957 Career Development Assistant Professor in economics, described efforts to identify potential inventions that are being missed, such as cures for diseases not sufficiently addressed through the ordinary economics of drug development, and how incentives could be changed to enable research directed at these “missing” inventions. And Katharina Ribbeck, the Eugene Bell Career Development Professor of Tissue Engineering in the Department of Biological Engineering, described her research on the variety of microbes that live on and in our bodies, and how we can better understand them to improve our health.

Others described the economic, social, and technological challenges facing some of the world’s largest and poorest populations. These presentations included an examination of the profound influence of new financial systems based on mobile phones, which are transforming development in Africa, and a look at the rapid rise of an entrepreneurial class in China that is bringing about a tide of innovation in a country previously known more for replicating technologies developed elsewhere. The implications of a global shift from predominantly rural to mostly urban populations, increasingly concentrated in megacities of more than 10 million people, was explored by John Fernandez, professor in the Department of Architecture and director of MIT’s Environmental Solutions Initiative.

And just to emphasize the fact that MIT is not only about high technology, Institute Professor Marcus Thompson talked about the very active performing arts scene on campus, and even played a violin piece composed in his honor by fellow MIT Institute Professor John Harbison. “Music and storytelling have always been fundamental to the human experience,” he said, and they play an important part in enriching the lives of MIT students and faculty as well.

The celebrations of MIT’s move to Cambridge will continue over the next few weeks, including an open house on April 23 and a “Moving Day” parade and pageant on May 7.

Tech reporter Katherine Nazemi writes about MIT’s “Frontiers of the Future” symposium, which provided an in-depth look at current research across campus. Nazemi writes that the symposium offered a glimpse at research on everything from “studying financial systems based on mobile phones in Africa to finding genetic pathways to improve the efficiency of biofuel production.”

MIT’s past and future

Architecture symposium March 30 and 31: Exploring the campus then, now, next