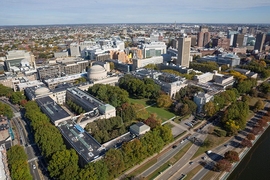 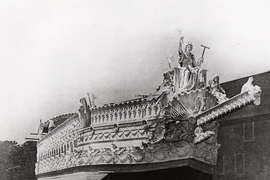 ↓ Download Image
Caption: As part of the elaborate three-day ceremony that marked MIT’s move to Cambridge in 1916, a reproduction of a Venetian barge was built to transport the Institute’s ceremonial mace across the river to its new home.
Credits: Courtesy of MIT Museum 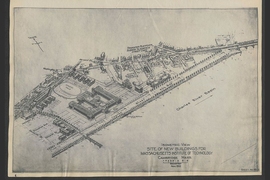 ↓ Download Image
Caption: One of many iterations of early plans for the Cambridge campus. Like many of the early design ideas, this one has its main facade facing the Charles River, unlike the ultimate design that faces onto Massachusetts Avenue. Drawing by John R. Freeman (1912).

Caption:
As part of the elaborate three-day ceremony that marked MIT’s move to Cambridge in 1916, a reproduction of a Venetian barge was built to transport the Institute’s ceremonial mace across the river to its new home.
Credits:
Courtesy of MIT Museum

Caption:
One of many iterations of early plans for the Cambridge campus. Like many of the early design ideas, this one has its main facade facing the Charles River, unlike the ultimate design that faces onto Massachusetts Avenue. Drawing by John R. Freeman (1912).

It was a grand gala event in 1916 when MIT, just over a half-century old, moved from a series of scattered buildings in Boston to a newly designed campus on a large parcel of freshly-created filled land in Cambridge. The celebratory events included a water parade across the river to symbolize the move, led by an elaborate replica of a Venetian grand barge that was built for the occasion.

To celebrate the centenary of that grand crossing, MIT is planning a series of public events this spring, culminating in a grand parade across the river by water and bridge, and a rare Open House at which tens of thousands of visitors are expected to explore the campus. The anniversary events also include a symposium, a day of service for the entire MIT community, a concert, a play, and a major special exhibit at the MIT Museum.

The land on which the new campus was built, like the Back Bay neighborhood across the Charles River, was reclaimed from a large area of tidal mudflats, and originally was also envisioned as a residential neighborhood. Only one major building was put in place as part of that original vision, however: the Riverbank Hotel, at the corner of Massachusetts Avenue and Memorial Drive, which has since been converted into Maseeh Hall, now MIT’s largest dormitory.

Planners spent many years debating the design of the new Cambridge campus, says John Ochsendorf, who is chair of the MIT 2016 steering committee, the Class of 1942 Professor of Architecture, and a professor of civil and environmental engineering. Several different architects worked on the plans and suggested different elements, but nearly all the designs, starting early in the process, included a large domed structure as a centerpiece to the campus, he says.

The relocation was an epochal event in MIT’s history. “What a leap in scale!” says Ochsendorf, when the Institute moved from “a hodgepodge of small buildings and lab space” in Boston to a parcel that originally occupied some 50 acres, which from the start included classrooms, labs, dormitories, and athletic fields. It was a “grand, audacious leap, to this huge interconnected campus in Cambridge.”

That interconnectedness was a key part of the innovative design of the campus, Ochsendorf explains. Most college campuses until then had been built as collections of separate buildings, each housing a particular department or school. But MIT wanted to encourage cross-disciplinary research, and having all the buildings connected together was — and still is — seen as an important facilitator for such collaborative work. The new connected campus design owed more to the layout of major industrial buildings than to any traditional academic structures, Ochsendorf says. That connectedness “really allowed MIT to become a preeminent problem-solving institution, because the barriers were broken down” he says. “That really shaped the spirit of MIT today.”

Richard Maclaurin, MIT's president at the time, was able to proceed with plans for the new campus after securing a donation from George Eastman, the founder of Eastman Kodak. President L. Rafael Reif says: "President Maclaurin had the highest aspirations for what MIT could become, and in George Eastman, he found the perfect patron and co-conspirator. In Eastman's words, they believed that 'The future of Technology should be big!' And with the audacious leap to this grand, interconnected campus in Cambridge, they made it so."

This centennial of the Cambridge campus, Ochsendorf says, represents “an opportunity to reflect on how and why” the campus was created the way it was, on a “blank slate” of new land.

Kicking off the series of centennial festivities, the MIT Museum will hold an opening reception on Monday, Feb. 29 of a new exhibit celebrating the design and construction of the new campus, titled “Imagining New Technology: Building MIT in Cambridge.”

The exhibits “include many original materials that have never been seen before,” says Deborah Douglas, the museum’s director of collections. These include early architectural sketches and plans, and even some original blueprints that have never been seen in public. There are also a variety of photographs and artifacts that show the dramatic impact the design of the Institute has had on the city. The museum will also host a series of programs and workshops in coming months related to the exhibit, and will house a crowd-sourced, detailed, 3-D replica of the entire campus and surrounding area. Anyone who has access to a 3-D printer and wants to participate can download the plans from the museum’s website and add their printed buildings to the 3-D map, Douglas says.

She says the rare drawings and photographs reveal some little-known aspects of this century-old campus. For example, they show how the “Main Group” buildings, though built in a classical style with their colonnades, domes, and limestone facings, have interiors that are “actually the antithesis of that,” she says: They are actually structurally very advanced and modern for their time, built on steel and reinforced concrete frames that give much more flexibility in modifying the interiors than traditional construction would have allowed.

There will be two symposia featuring discussions of MIT and its campus. First, a two-day event on March 30-31, called “The Campus — Then, Now, Next,” will feature discussions about the past, present, and future of MIT and its role as an innovative campus.

Then, an afternoon symposium will be held in Kresge Auditorium on April 12, called “Beyond 2016 — MIT's Frontiers of the Future.” This will feature a cross-section of MIT faculty members giving short talks about the frontiers of their own work as well as on visions for the future of MIT. This selection, intended to showcase the wide variety of activities taking place at MIT, will help to “bring the campus to life,” Ochsendorf says.

Emphasizing the deep, ongoing connections between MIT and the city it calls home, the centennial celebrations will also include an MIT Day of Service, on April 19. “We will be matching local organizations in need with volunteers from campus,” Ochsendorf says. Volunteers may include any graduate or undergraduate students, faculty, staff and alumni, as individuals or in teams, who want to pitch in and help out at service organizations in the area. And an important emphasis of this service will be to establish links for ongoing volunteer work in the city by members of the MIT community.

On April 23, the celebration’s biggest event will take place: a campus-wide “Open House” to which everyone is invited, with labs and demonstrations open for view all across the Institute. “We expect tens of thousands of visitors,” Ochsendorf says.

The culmination of the commemorative activities will take place on May 7 with the “Moving Day: Crossing the Charles” parade and competitions, featuring a variety of methods of crossing the river designed by teams of MIT community members. The crossing will feature an “innovative procession over land and water” to celebrate the Institute’s historic relocation.

Entries in the competition “may move autonomously or not; they may be representations of transport through artistic expression; and they may demonstrate types of transport other than physical, such as that of thought or emotion,” according to the official rules for the event. Teams are encouraged to use creativity, humor, elegant engineering, beauty, and “a sense of ‘only at MIT.’” Onlookers are encouraged to come and cheer on the various teams and take part in the parade.

In a fitting touch, the Grand Master of the parade will be none other than Oliver Smoot ’62, the MIT fraternity member whose body was used by his fraternity brothers as a living yardstick to measure the length of the Harvard Bridge that leads to the campus from Boston. The story of that long-ago prank is so well-known that even Google Earth allows “smoots” as an optional unit of measurement. And as the painted markings on the bridge, refreshed every year with new paint, attest, that bridge measures exactly 364.4 smoots and one ear.

The day of celebration will conclude with a pageant in Killian Court, featuring a multimedia spectacle, after which participants will spread out to a series of dance parties all across the campus.

As part of the centennial celebration of MIT’s move from Boston to Cambridge, the Institute is hosting a campus-wide open house on Saturday, April 23rd, the AP reports. The open house will feature more than 350 activities, including “robotic demonstrations, science exhibits, laboratory tours and talks by professors.”

In an article for The Boston Globe, Jeremy Eichler highlights MIT’s open house on Saturday April 23rd as part of his top picks for Boston-area classical music events. Eichler writes that, “researchers from the MIT Media Lab — incubator of operatic robots, city symphonies, and many other arts-related projects — will offer demos of their current research.”

On April 23rd, MIT will host an open house featuring 380 activities across campus, The Tech reports. Michael Berry ‘10, program coordinator for MIT 2016, explains that the open house offers visitors a chance to explore the “important and fun work done on MIT’s campus and how it impacts the world.”

Boston Globe reporter Mark Feeney writes about the MIT Museum’s new show, “Imagining New Technology: Building MIT in Cambridge,” which honors the 100th anniversary of the Institute’s move to Cambridge. Feeney writes that the items on display “make up a very MIT blend of the majestic, even magnificent…with the cheerfully goofy.”