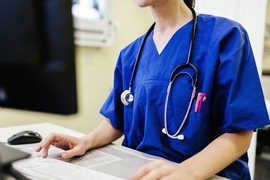 For employers, selecting health care plans and benefits that adequately cover employees, within a budget, is a complex game of trade-offs. Considerations include whether to offer higher premiums for lower deductibles, whether to add preventive-care programs, and how to best cover various drugs and treatments.

“The benefit is, the overall cost goes down and quality is higher,” says BST co-founder and chief scientist Dimitris Bertsimas, the Boeing Leaders for Global Operations Professor at the MIT Sloan School of Management and co-director of the MIT Operations Research Center.

Optimizing health care plans becomes increasingly important, Bertsimas says, as monthly health care premiums and deductibles continue to rise, for employees and employers alike. According to a 2015 report by the Kaiser Family Foundation, the average annual single coverage premium is now $6,251, and the average family coverage premium is $17,545, an increase of 61 percent since 2005 for families. Employers on average pay roughly 82 percent of the premium costs for a single employee and roughly 71 percent for families. For family coverage, for example, employers on average will contribute $12,591 to the premium, while employers pay $4,955, according to the report.

While it may be obvious to the public that employees are dishing out more for health care, behind the scenes “health care cost is the second largest expense after payroll for employers,” Bertsimas says. It’s important that employers have detailed information so they can plan ahead, he adds.

About 200 companies — with anywhere from 500 to 50,000 employees — now use the BST software. Currently, BST sets its sights on rapid expansion. “Hopefully [we] can affect the health care in the country, which, in my opinion, is one of the country’s most important problems,” he says.

The BST software mines employee health-insurance claims, the detailed invoices sent by hospitals to health insurers that show exactly what services a patient received. It looks for patterns of emerging health risks among employee populations — such as strokes, heart attacks, diabetes, and cancers. These claims are provided through third-party administrators, which keep employee health records private from employers.

The software determines if the company’s health care plans are adequately covering all health issues or, in turn, if coverage can be reduced — without affecting employee wellness — to save money on premiums and deductibles. Each month, BST provides employers with updated reports and annually designs an optimized health care plan based on coverage predictions for the following year.

Say, for example, a company has a number of employees with a disease like Type 2 diabetes. Mining claims data, the software can predict if employees may need frequent hospital visits for care, will require expensive medications, or may even be at risk for vision loss or other physical problems associated with diabetes.

Using that information, when annual enrollment time rolls around, the software automatically designs a plan for employers that could, for instance, increase coverage of diabetes treatments (such as dialysis) or even add wellness programs — such as gym memberships or weight-loss and lifestyle coaching — to boost overall health and curb future diabetes cases.

Such preventative measures can also cost companies less in the future, Bertsimas says: “In addition to being the thing to do … it’s a long-term investment.”

But the software also recognizes and predicts declining risks. Employees with forms of cancer, for example, may at one point require surgeries, or employees with diseases like Hepatitis C may require expensive drugs for a set period of time. Employers may want to ensure broader coverage and lower deductibles to address those conditions, which may raise premiums. However, the software can predict if those cancer patients won’t need surgery the following year, or if the Hepatitis C patients are nearing the end of their medications.

“By having these accurate predictions you can reallocate dollars in more appropriate ways to benefit the population,” Bertsimas says, adding, “The key here is that data is power.”

BST was founded to fill a gap in predictive-analytics software for health care — technology Bertsimas helped pioneer with his former startup, D2Hawkeye.

Founded in 2001, D2Hawkeye analyzed health-insurance claims to give employers detailed reports on health care plans. “But there was no prescriptive component,” Bertsimas says, meaning the software didn’t tell employers what to do with the data.

Bertsimas is an expert in computational optimization, and Sofoul had previously founded a health care plan consulting firm. Combining their expertise, the two launched BST in 2011 “to do descriptive, predictive, and, most importantly, prescriptive analytics on health care costs,” Bertsimas says.

Today, Bertsimas says, “prescriptive analytics” — designing health care plans — makes BST unique in the industry. “Major companies have health care consultants … that do this analysis, not algorithms,” Bertsimas says. “But humans are not capable of processing hundreds of millions of data points [to optimize plans]. In that, we are unique.”

BST is now developing an online service for employees that aims to help them choose health care plans and alert them to emerging risks of diseases, heart attack, and strokes. The online tool will also alert a doctor who may not catch — or even have access to — details of a patient’s medical history.

For example, the algorithms that power BST software can tell that someone is at risk for a heart attack if they’ve been diagnosed with diabetes, hypertension, and hyperlipidemia — high levels of lipids in the blood — or have had increased visits to the doctors for pulmonary problems over the past few months. When a patient visits a doctor, the BST system can crunch all the data and say if the patient is at risk for a heart attack.

“If you have a system that knows the totality of your claims, you have a total view of the patient,” Bertsimas says.

This type of system puts the focus on preventative health, which ultimately cuts health care costs, Bertsimas adds. “It’s much cheaper to prevent than act after the fact,” he says. “If somebody has heart attack or stroke that’s a major operation, but if you prevent it, you save significant amounts of money.”