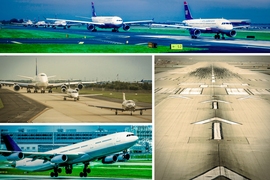 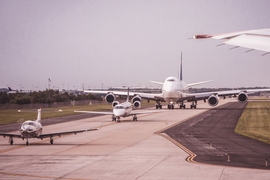 Nobody likes flight delays, but they are a common occurrence: In 2011, about 20 percent of U.S. flights were at least 15 minutes behind schedule. Those delays irritate passengers and, in 2010, added an estimated $6.5 billion to U.S. airlines’ operating costs.

Delays tend to hit some airlines harder than others, due to the approach the Federal Aviation Administration (FAA) uses to resolve them. This approach places an emphasis on minimizing aggregate system delays, nationwide — a policy that affects some airlines much more than others at a given time.

But now a study by MIT researchers presents a new method for dealing with delays that, they conclude, keeps system-wide delays virtually constant while distributing delays among airlines more evenly. Specifically, it lets airlines distribute delays among themselves more evenly by allowing them to swap schedule slots with each other. The result, the researchers say, is more fair, without sacrificing efficiency.

“The price of fairness is small,” says Dimitris Bertsimas, the Boeing Leaders for Global Operations Professor of Management at the MIT Sloan School of Management and co-author of a paper detailing the findings.

The paper, published in the journal Transportation Science, is co-authored by Bertsimas and Shubham Gupta of MIT’s Operations Research Center.

The current air traffic flow-management system used by the FAA uses multiple algorithms, or sets of rules, to manage aggregate delays. These include ground-delay programs, which hold flights at their airports of origin when necessary, and airspace-flow programs, which control the arrivals into areas suffering delays, often due to bad weather.

Bertsimas — who has analyzed and published papers on air-traffic networks dating back to the 1990s — and Gupta then constructed a model using some different rules. Their proposal would let airlines switch certain time slots with each other, with limitations placed on the amount of time any flight could be delayed when such swaps are made.

The researchers then tested their model using a comprehensive set of data covering six full days of air service in the U.S., which were randomly selected from the years 2004, 2005, and 2006. The data included the 55 biggest airports in the U.S. and the five biggest airlines (measured by the number of flights) at the time, which were Southwest, American, Delta, United, and Northwest (which has since merged with Delta). There were over 30,000 flights operated on those days combined.

When Bertsimas and Gupta simulated what air traffic would have looked like on those six days using their alternate system, they found that the aggregate delays in the entire air-traffic system were virtually unchanged. On none of the six days did total delays differ from the empirical results by more than 1.0 percent, and the mean difference was 0.1 percent. And given the guideline of equalizing delays among airlines, the simulation maintained a scenario in which each airline was able to swap an identical number of flight-schedule slots.

While the FAA does partake in a process of collaborative decision-making with the airlines, to help create a degree of fair distribution for delays, some air transportation analysts say the current proposal would make that process more robust.

"It enhances it very substantially," says Michael Ball, an associate dean and professor at the University of Maryland's Smith School of Business, and a leading researcher on aviation operations. Compared to the current system, Ball says, the proposal has the benefit of "allowing much more complicated [trading]" of flight slots, adding: "This model has huge potential benefits."

That said, Ball emphasizes that any adjustments to the current system would need buy-in from all stakeholders as well as testing, a point Bertsimas acknowledges as well.

Bertsimas notes that the computational side of the proposed system is fast enough to solve airline-network problems more quickly than they arise — a crucial point, because otherwise schedule changes in any given day would be obsolete before they could be implemented.

“You can solve a problem the size of the U.S. [air network] in seconds,” Bertsimas says.

The best rationale for tweaking the airline scheduling system as the paper suggests, Bertsimas believes, is that ultimately fairness is one of three elements that makes such operations work, along with optimization that makes systems efficient, and robustness that prevents systems from failing. Markets that fail fairness tests fare poorly over time.

“If a system is viewed as not fair, it is not stable,” Bertsimas concludes.

A new study by MIT researchers shows how airlines could juggle delays more equitably by distributing disruptions among themselves, reports Bart Jansen for USA Today. The researchers found that airlines could distribute delays “without adding significantly to the overall delays.”

According to a new MIT study, airlines could handle flight delays more equitably by distributing them among themselves, reports Lloyd Mallison for Boston.com. The new system “would mean that two hypothetical planes could both have a 15-minute delay rather than one having no delay, and one having a 30-minute wait,” Mallison explains.