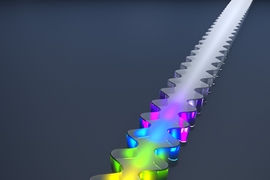 ↓ Download Image
Caption: An artist’s embellishment of an image of the “gain medium” used to produce terahertz frequency combs. The different colors indicate that different wavelengths of oscillating terahertz radiation travel different distances through the medium, which has a different refractive index for each of them.

Caption:
An artist’s embellishment of an image of the “gain medium” used to produce terahertz frequency combs. The different colors indicate that different wavelengths of oscillating terahertz radiation travel different distances through the medium, which has a different refractive index for each of them.
Credits:
Image: Yan Liang/L2Molecule.com

Terahertz spectroscopy, which uses the band of electromagnetic radiation between microwaves and infrared light, is a promising security technology because it can extract the spectroscopic “fingerprints” of a wide range of materials, including chemicals used in explosives.

But traditional terahertz spectroscopy requires a radiation source that’s heavy and about the size of a large suitcase, and it takes 15 to 30 minutes to analyze a single sample, rendering it impractical for most applications.

In the latest issue of the journal Optica, researchers from MIT’s Research Laboratory of Electronics and their colleagues present a new terahertz spectroscopy system that uses a quantum cascade laser, a source of terahertz radiation that’s the size of a computer chip. The system can extract a material’s spectroscopic signature in just 100 microseconds.

The device is so efficient because it emits terahertz radiation in what’s known as a “frequency comb,” meaning a range of frequencies that are perfectly evenly spaced.

“With this work, we answer the question, ‘What is the real application of quantum-cascade laser frequency combs?’” says Yang Yang, a graduate student in electrical engineering and computer science and first author on the new paper. “Terahertz is such a unique region that spectroscopy is probably the best application. And QCL-based frequency combs are a great candidate for spectroscopy.”

Different materials absorb different frequencies of terahertz radiation to different degrees, giving each of them a unique terahertz-absorption profile. Traditionally, however, terahertz spectroscopy has required measuring a material’s response to each frequency separately, a process that involves mechanically readjusting the spectroscopic apparatus. That’s why the method has been so time consuming.

Because the frequencies in a frequency comb are evenly spaced, however, it’s possible to mathematically reconstruct a material’s absorption fingerprint from just a few measurements, without any mechanical adjustments.

The trick is evening out the spacing in the comb. Quantum cascade lasers, like all electrically powered lasers, bounce electromagnetic radiation back and forth through a “gain medium” until the radiation has enough energy to escape. They emit radiation at multiple frequencies that are determined by the length of the gain medium.

To even out their lasers’ frequencies, the MIT researchers and their colleagues use an oddly shaped gain medium, with regular, symmetrical indentations in its sides that alter the medium’s refractive index and restore uniformity to the distribution of the emitted frequencies.

Yang; his advisor, Qing Hu, the Distinguished Professor in Electrical Engineering and Computer Science; and first author David Burghoff, who received his PhD in electrical engineering and computer science from MIT in 2014 and is now a research scientist in Hu’s group, reported this design in Nature Photonics in 2014. But while their first prototype demonstrated the design’s feasibility, it in fact emitted two frequency combs, clustered around two different central frequencies, with a gap between them, which made it less than ideal for spectroscopy.

In the new work, Yang and Burghoff, who are joint first authors; Hu; Darren Hayton and Jian-Rong Gao of the Netherlands Institute for Space Research; and John Reno of Sandia National Laboratories developed a new gain medium that produces a single, unbroken frequency comb. Like the previous gain medium, the new one consists of hundreds of alternating layers of gallium arsenide and aluminum gallium arsenide, with different but precisely calibrated thicknesses.

As a proof of concept, the researchers used their system to measure the spectral signature of not a chemical sample but an optical device called an etalon, made from a wafer of gallium arsenide, whose spectral properties could be calculated theoretically in advance, providing a clear standard of comparison. The new system’s measurements were a very good fit for the etalon’s terahertz-transmission profile, suggesting that it could be useful for detecting chemicals.

Although terahertz quantum cascade lasers are of chip scale, they need to be cooled to very low temperatures, so they require refrigerated housings that can be inconveniently bulky. Hu’s group continues to work on the design of increasingly high-temperature quantum cascade lasers, but in the new paper, Yang and his colleagues demonstrated that they could extract a reliable spectroscopic signature from a target using only very short bursts of terahertz radiation. That could make terahertz spectroscopy practical even at low temperatures.

“We used to consume 10 watts, but my laser turns on only 1 percent of the time, which significantly reduces the refrigeration constraints,” Yang explains. “So we can use compact-sized cooling.”

“This paper is a breakthrough, because these kinds of sources were not available in terahertz,” says Gerard Wysocki, an assistant professor of electrical engineering at Princeton University. “Qing Hu is the first to actually present terahertz frequency combs that are semiconductor devices, all integrated, which promise very compact broadband terahertz spectrometers.”

“Because they used these very inventive phase correction techniques, they have demonstrated that even with pulsed sources you can extract data that is reasonably high resolution already,” Wysocki continues. “That’s a technique that they are pioneering, and this is a great first step toward chemical sensing in the terahertz region.”