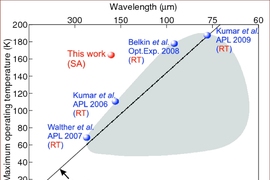 Credits:
Graphic: Patrick Gillooly
Terahertz rays — radiation between microwaves and infrared rays on the electromagnetic spectrum — are a promising means of detecting explosives, but they’ve proven hard to generate cost effectively. So far, solid-state lasers — the cheap, miniature type of laser found in CD players — have been unable to produce terahertz rays unless they’re supercooled, which makes them impractical for mass deployment.

Some researchers had even begun to suspect that a room-temperature, solid-state terahertz laser was physically impossible. The performance of experimental terahertz lasers built in the lab has suggested a linear correlation between operating temperature and frequency, in which halving the frequency requires roughly halving the temperature. This led some scientists to speculate that frequency and temperature are linked by some fundamental physical law, a strict proportionality that couldn’t be violated.

That hypothesis, however, turns out to be wrong. In the latest issue of the journal Nature Physics, a group of researchers at MIT and Sandia National Laboratories report a solid-state terahertz laser that operates at nearly twice the temperature that that putative proportionality would have predicted. That temperature is still too low to be practical for airport scanners or devices in a bomb squad’s tool kit, but it suggests that the quest for room-temperature terahertz lasers shouldn’t be called off just yet.

“There are many naysayers saying that they can never be made operational at room temperature,” says Qing Hu, a professor of electrical engineering. “We break this psychological, empirical barrier by a factor of two. No one will say that it’s a barrier anymore.”

Solid-state lasers are made from semiconductors, materials such as gallium arsenide that can act as either conductors or insulators. Applying a voltage to the semiconductor causes its electrons to jump into a higher-energy state, and when the electrons fall back into their original state, they release their excess energy as photons, or particles of light.

At low frequencies, however, the gaps between an electron’s energy states become smaller, which makes it harder to coax electrons into exactly the right state for photon emission. Lower temperatures, in turn, allow for more precise control of the electrons’ energy levels.

“In physics, there’s a standard way of thinking, that temperature equals energy, and if you want to go to smaller energies, and see quantum effects, you better go to smaller temperatures,” says Benjamin Williams, director of UCLA’s Terahertz Devices and Intersubband Nanostructures Laboratory, who wasn’t involved in the research. “And that’s the type of thinking that informs this idea about this limit.”

To address the problem of shrinking gaps between energy states at low frequencies, Hu, together with Sushil Kumar, a postdoc in his lab, Ivan Chan, a graduate student in the lab, and Sandia’s John Reno built a laser in which the applied voltage causes electrons to jump into an even higher-energy state than usual. Through a phenomenon called “scattering,” the electrons then release some of that energy as physical vibration rather than as light. They remain in an excited state, however, and release most of their remaining energy as photons.

The new laser is built from the same materials used in existing terahertz lasers, gallium arsenide and aluminum gallium arsenide, which are deposited in alternating layers. Each loss of energy occurs in a different layer, and the thickness of the layer determines how much energy the electron loses.

“This design technique circumvents one of the problems that have been limiting the temperature,” Williams says. “Going to this new design path may give lots of benefits that will take us higher and higher in temperature. Does this result say that we’re right around the corner from getting to room temperature? Probably not. But it points a possible path, and it raises a lot of hope.”

A decade ago, it was widely believed that terahertz rays could provide a safer, more useful replacement for X-rays during airport security screening: Not only can they penetrate clothing, but, unlike X-rays, they also interact with a wide range of chemical compounds in distinctive and detectable ways. Hu says, however, that the frequencies of terahertz rays that are good for identifying chemicals can’t penetrate materials even as thick as a suitcase wall, and they don’t reflect well off of human flesh, so even after penetrating clothing, they might never reach a detector. They could, however, detect traces of explosives — a few molecules of a chemical wafting from a shoe bomb, for instance, or clinging to the side of an abandoned vehicle — with extraordinary sensitivity. Hu believes that, when room-temperature terahertz lasers are ultimately developed, they will thus be used in conjunction with other existing and emerging technologies. “There is no single silver bullet,” he says. “There have to be as many modalities as possible to cross-correlate, in order to increase sensitivity and, more importantly, to reduce false alarms.”