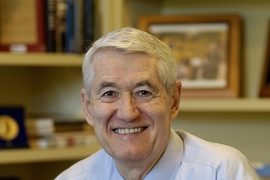 Robert Birgeneau, professor emeritus in MIT’s Department of Physics and former dean of science, has been named as the recipient of the National Science Board’s 2016 Vannevar Bush Award.

Birgeneau, who is also chancellor emeritus at the University of California at Berkeley, is being recognized for his “exceptional public service and scientific leadership, including lifelong, high caliber research committed to the public good and tireless advocacy for the nation’s research universities together with unrelenting efforts to advance equity and inclusion in higher education and science,” according to a press release from the National Science Board, which is the policy-making body for the National Science Foundation.

A graduate of the University of Toronto and Yale University, Birgeneau joined the physics faculty at MIT in 1975 and was named the Cecil and Ida Green Professor of Physics in 1982. He served as the dean of science from 1991 to 2000 and has been professor emeritus of physics since 2003.

In 2000, Birgeneau became president of the University of Toronto, and in 2004 he became chancellor at UC Berkeley, where he was known for his promotion of diversity and equity while advancing academic excellence. Under his leadership, Berkeley became the first university in the nation to offer comprehensive financial aid to undocumented students and the first public university to provide significant financial aid to middle class students.

Birgeneau's research has investigated the phases and phase transition behavior of novel states of matter. He and his collaborators pioneered the use of X-ray synchrotron radiation for high-resolution studies of condensed matter. For the past decade, they have carried out a comprehensive research program aimed at elucidating the microscopic properties of the high-temperature superconducting materials.

“I have always felt a particular kinship with Dr. Bush because much of my research was carried out in the Vannevar Bush building at MIT,” Birgeneau told the National Science Board. “It is especially gratifying to me to be honored for simply always trying to act responsibly and do the right thing. In particular, I have worked hard to ensure that every person, regardless of his or her gender, race, religion, sexual orientation, or immigration status, can be a full participant in our great science and technology enterprise. It is only by drawing on the entire talent pool that the U.S. will continue to excel.”