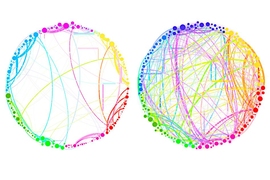 ↓ Download Image
Caption: This diagram demonstrates the simplified results that can be obtained by using quantum analysis on enormous, complex sets of data. Shown here are the connections between different regions of the brain in a control subject (left) and a subject under the influence of the psychedelic compound psilocybin (right). This demonstrates a dramatic increase in connectivity, which explains some of the drug’s effects (such as “hearing” colors or “seeing” smells). Such an analysis, involving billions of brain cells, would be too complex for conventional techniques, but could be handled easily by the new quantum approach, the researchers say.

Caption:
This diagram demonstrates the simplified results that can be obtained by using quantum analysis on enormous, complex sets of data. Shown here are the connections between different regions of the brain in a control subject (left) and a subject under the influence of the psychedelic compound psilocybin (right). This demonstrates a dramatic increase in connectivity, which explains some of the drug’s effects (such as “hearing” colors or “seeing” smells). Such an analysis, involving billions of brain cells, would be too complex for conventional techniques, but could be handled easily by the new quantum approach, the researchers say.
Credits:
Image reprinted with permission from "Homological scaffolds of brain functional networks," by Francesco Vaccarino et al., in Interface, published by the Royal Society

Machine learning systems can help researchers deal with this ever-growing flood of information. Some of the most powerful of these analytical tools are based on a strange branch of geometry called topology, which deals with properties that stay the same even when something is bent and stretched every which way.

Such topological systems are especially useful for analyzing the connections in complex networks, such as the internal wiring of the brain, the U.S. power grid, or the global interconnections of the Internet. But even with the most powerful modern supercomputers, such problems remain daunting and impractical to solve. Now, a new approach that would use quantum computers to streamline these problems has been developed by researchers at MIT, the University of Waterloo, and the University of Southern California.

The team describes their theoretical proposal this week in the journal Nature Communications. Seth Lloyd, the paper’s lead author and the Nam P. Suh Professor of Mechanical Engineering, explains that algebraic topology is key to the new method. This approach, he says, helps to reduce the impact of the inevitable distortions that arise every time someone collects data about the real world.

In a topological description, basic features of the data (How many holes does it have? How are the different parts connected?) are considered the same no matter how much they are stretched, compressed, or distorted. Lloyd explains that it is often these fundamental topological attributes “that are important in trying to reconstruct the underlying patterns in the real world that the data are supposed to represent.”

It doesn’t matter what kind of dataset is being analyzed, he says. The topological approach to looking for connections and holes “works whether it’s an actual physical hole, or the data represents a logical argument and there’s a hole in the argument. This will find both kinds of holes.”

Using conventional computers, that approach is too demanding for all but the simplest situations. Topological analysis “represents a crucial way of getting at the significant features of the data, but it’s computationally very expensive,” Lloyd says. “This is where quantum mechanics kicks in.” The new quantum-based approach, he says, could exponentially speed up such calculations.

Lloyd offers an example to illustrate that potential speedup: If you have a dataset with 300 points, a conventional approach to analyzing all the topological features in that system would require “a computer the size of the universe,” he says. That is, it would take 2300 (two to the 300th power) processing units — approximately the number of all the particles in the universe. In other words, the problem is simply not solvable in that way.

“That’s where our algorithm kicks in,” he says. Solving the same problem with the new system, using a quantum computer, would require just 300 quantum bits — and a device this size may be achieved in the next few years, according to Lloyd.

“Our algorithm shows that you don’t need a big quantum computer to kick some serious topological butt,” he says.

There are many important kinds of huge datasets where the quantum-topological approach could be useful, Lloyd says, for example understanding interconnections in the brain. “By applying topological analysis to datasets gleaned by electroencephalography or functional MRI, you can reveal the complex connectivity and topology of the sequences of firing neurons that underlie our thought processes,” he says.

The same approach could be used for analyzing many other kinds of information. “You could apply it to the world’s economy, or to social networks, or almost any system that involves long-range transport of goods or information,” says Lloyd, who holds a joint appointment as a professor of physics. But the limits of classical computation have prevented such approaches from being applied before.

While this work is theoretical, “experimentalists have already contacted us about trying prototypes,” he says. “You could find the topology of simple structures on a very simple quantum computer. People are trying proof-of-concept experiments.”

Ignacio Cirac, a professor at the Max Planck Institute of Quantum Optics in Munich, Germany, who was not involved in this research, calls it “a very original idea, and I think that it has a great potential.” He adds “I guess that it has to be further developed and adapted to particular problems. In any case, I think that this is top-quality research.”

The team also included Silvano Garnerone of the University of Waterloo in Ontario, Canada, and Paolo Zanardi of the Center for Quantum Information Science and Technology at the University of Southern California. The work was supported by the Army Research Office, Air Force Office of Scientific Research, Defense Advanced Research Projects Agency, Multidisciplinary University Research Initiative of the Office of Naval Research, and the National Science Foundation.