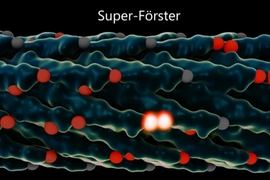 ↓ Download Image
Caption: Rendering of a virus used in the MIT experiments. The light-collecting centers, called chromophores, are in red, and chromophores that just absorbed a photon of light are glowing white. After the virus is modified to adjust the spacing between the chromophores, energy can jump from one set of chromophores to the next faster and more efficiently.

Credits: Courtesy of the researchers and Lauren Aleza Kaye

Caption:
Rendering of a virus used in the MIT experiments. The light-collecting centers, called chromophores, are in red, and chromophores that just absorbed a photon of light are glowing white. After the virus is modified to adjust the spacing between the chromophores, energy can jump from one set of chromophores to the next faster and more efficiently.
Credits:
Courtesy of the researchers and Lauren Aleza Kaye

Nature has had billions of years to perfect photosynthesis, which directly or indirectly supports virtually all life on Earth. In that time, the process has achieved almost 100 percent efficiency in transporting the energy of sunlight from receptors to reaction centers where it can be harnessed — a performance vastly better than even the best solar cells.

One way plants achieve this efficiency is by making use of the exotic effects of quantum mechanics — effects sometimes known as “quantum weirdness.” These effects, which include the ability of a particle to exist in more than one place at a time, have now been used by engineers at MIT to achieve a significant efficiency boost in a light-harvesting system.

Surprisingly, the researchers at MIT and Eni, the Italian energy company, achieved this new approach to solar energy not with high-tech materials or microchips — but by using genetically engineered viruses.

This achievement in coupling quantum research and genetic manipulation, described this week in the journal Nature Materials, was the work of MIT professors Angela Belcher, an expert on engineering viruses to carry out energy-related tasks, and Seth Lloyd, an expert on quantum theory and its potential applications; research associate Heechul Park; and 14 collaborators at MIT, Eni, and Italian universities.

Lloyd, the Nam Pyo Suh Professor in the Department of Mechanical Engineering, explains that in photosynthesis, a photon hits a receptor called a chromophore, which in turn produces an exciton — a quantum particle of energy. This exciton jumps from one chromophore to another until it reaches a reaction center, where that energy is harnessed to build the molecules that support life.

But the hopping pathway is random and inefficient unless it takes advantage of quantum effects that allow it, in effect, to take multiple pathways at once and select the best ones, behaving more like a wave than a particle.

This efficient movement of excitons has one key requirement: The chromophores have to be arranged just right, with exactly the right amount of space between them. This, Lloyd explains, is known as the “Quantum Goldilocks Effect.”

That’s where the virus comes in. By engineering a virus that Belcher has worked with for years, the team was able to get it to bond with multiple synthetic chromophores — or, in this case, organic dyes. The researchers were then able to produce many varieties of the virus, with slightly different spacings between those synthetic chromophores, and select the ones that performed best.

In the end, they were able to more than double excitons’ speed, increasing the distance they traveled before dissipating — a significant improvement in the efficiency of the process.

The project started at a workshop held at Eni's laboratories in Novara, Italy. Lloyd and Belcher, the James Mason Crafts Professor in the Department of Biological Engineering, were reporting on different projects they had worked on, and began discussing, along with Eni researchers, the possibility of a project encompassing their very different expertise. Lloyd, whose work is mostly theoretical, pointed out that the viruses Belcher works with have the right length scales to potentially support quantum effects.

In 2008, Lloyd had published a paper demonstrating that photosynthetic organisms transmit light energy efficiently because of these quantum effects. When he saw Belcher’s report on her work with engineered viruses, he wondered if that might provide a way to artificially induce a similar effect, in an effort to approach nature’s efficiency.

“I had been talking about potential systems you could use to demonstrate this effect, and Angela said, ‘We’re already making those,’” Lloyd recalls. Eventually, after much analysis, “We came up with design principles to redesign how the virus is capturing light, and get it to this quantum regime.”

Within two weeks, Belcher’s team had created their first test version of the engineered virus. Many months of work then went into perfecting the receptors and the spacings.

Once the team engineered the viruses, they were able to use laser spectroscopy and dynamical modeling to watch the light-harvesting process in action, and to demonstrate that the new viruses were indeed making use of quantum coherence to enhance the transport of excitons.

“It was really fun,” Belcher says. “A group of us who spoke different [scientific] languages worked closely together, to both make this class of organisms, and analyze the data. That’s why I’m so excited by this.”

While this initial result is essentially a proof of concept rather than a practical system, it points the way toward an approach that could lead to inexpensive and efficient solar cells or light-driven catalysis, the team says. So far, the engineered viruses collect and transport energy from incoming light, but do not yet harness it to produce power (as in solar cells) or molecules (as in photosynthesis). But this could be done by adding a reaction center, where such processing takes place, to the end of the virus where the excitons end up.

“This is exciting and high-quality research,” says Alán Aspuru-Guzik, a professor of chemistry and chemical biology at Harvard University who was not involved in this work. The research, he says, “combines the work of a leader in theory (Lloyd) and a leader in experiment (Belcher) in a truly multidisciplinary and exciting combination that spans biology to physics to potentially, future technology.”

“​Access to controllable excitonic systems is a goal shared by many researchers in the field,” Aspuru-Guzik adds. “This work provides fundamental understanding that can allow for the development of devices with an increased control of exciton flow.”

The research was supported by Eni through the MIT Energy Initiative. In addition to MIT postdocs Nimrod Heldman and Patrick Rebentrost, the team included researchers at the University of Florence, the University of Perugia, and Eni.