A programming language for living cells 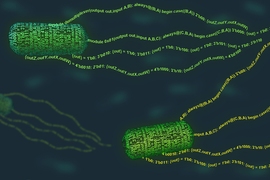 ↓ Download Image
Caption: MIT biological engineers have devised a programming language that can be used to give new functions to E. coli bacteria.

Caption:
MIT biological engineers have devised a programming language that can be used to give new functions to E. coli bacteria.
Credits:
Image: Janet Iwasa

MIT biological engineers have created a programming language that allows them to rapidly design complex, DNA-encoded circuits that give new functions to living cells.

Using this language, anyone can write a program for the function they want, such as detecting and responding to certain environmental conditions. They can then generate a DNA sequence that will achieve it.

“It is literally a programming language for bacteria,” says Christopher Voigt, an MIT professor of biological engineering. “You use a text-based language, just like you’re programming a computer. Then you take that text and you compile it and it turns it into a DNA sequence that you put into the cell, and the circuit runs inside the cell.”

Voigt and colleagues at Boston University and the National Institute of Standards and Technology have used this language, which they describe in the April 1 issue of Science, to build circuits that can detect up to three inputs and respond in different ways. Future applications for this kind of programming include designing bacterial cells that can produce a cancer drug when they detect a tumor, or creating yeast cells that can halt their own fermentation process if too many toxic byproducts build up.

The researchers plan to make the user design interface available on the Web.

Over the past 15 years, biologists and engineers have designed many genetic parts, such as sensors, memory switches, and biological clocks, that can be combined to modify existing cell functions and add new ones.

However, designing each circuit is a laborious process that requires great expertise and often a lot of trial and error. “You have to have this really intimate knowledge of how those pieces are going to work and how they’re going to come together,” Voigt says.

Users of the new programming language, however, need no special knowledge of genetic engineering.

“You could be completely naive as to how any of it works. That’s what’s really different about this,” Voigt says. “You could be a student in high school and go onto the Web-based server and type out the program you want, and it spits back the DNA sequence.”

The language is based on Verilog, which is commonly used to program computer chips. To create a version of the language that would work for cells, the researchers designed computing elements such as logic gates and sensors that can be encoded in a bacterial cell’s DNA. The sensors can detect different compounds, such as oxygen or glucose, as well as light, temperature, acidity, and other environmental conditions. Users can also add their own sensors. “It’s very customizable,” Voigt says.

The biggest challenge, he says, was designing the 14 logic gates used in the circuits so that they wouldn’t interfere with each other once placed in the complex environment of a living cell.

In the current version of the programming language, these genetic parts are optimized for E. coli, but the researchers are working on expanding the language for other strains of bacteria, including Bacteroides, commonly found in the human gut, and Pseudomonas, which often lives in plant roots, as well as the yeast Saccharomyces cerevisiae. This would allow users to write a single program and then compile it for different organisms to get the right DNA sequence for each one.

Using this language, the researchers programmed 60 circuits with different functions, and 45 of them worked correctly the first time they were tested. Many of the circuits were designed to measure one or more environmental conditions, such as oxygen level or glucose concentration, and respond accordingly. Another circuit was designed to rank three different inputs and then respond based on the priority of each one.

One of the new circuits is the largest biological circuit ever built, containing seven logic gates and about 12,000 base pairs of DNA.

Another advantage of this technique is its speed. Until now, “it would take years to build these types of circuits. Now you just hit the button and immediately get a DNA sequence to test,” Voigt says.

His team plans to work on several different applications using this approach: bacteria that can be swallowed to aid in digestion of lactose; bacteria that can live on plant roots and produce insecticide if they sense the plant is under attack; and yeast that can be engineered to shut off when they are producing too many toxic byproducts in a fermentation reactor.

MIT researchers have developed a programming language that allows users to design DNA circuits for living cells, writes Andy Coghlan for New Scientist. “We take the same approach as for designing an electronic chip,” says Prof. Christopher Voigt. “Every step in the process is the same – it’s just that instead of mapping the circuit to silicon, it’s mapped to DNA.”

Christopher Intagliata reports for Scientific American about the programming language Prof. Christopher Voigt’s team developed for living cells. Intagliata explains that, “the researchers used the platform to design 60 genetic circuits, which they then ran inside E. coli bacteria. Many of these DNA-based circuits allow bacteria to sense environmental data…and respond in various ways.”

MIT researchers have developed a programming language for living cells, reports Erika Check Hayden for Nature. “What we’re finding over time is that biology isn’t this kind of mysterious unpredictable substrate; it just felt that way because we didn’t really have the tools to see what was going on,” Prof. Christopher Voigt says.