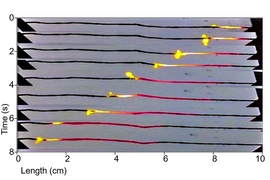 ↓ Download Image
Caption: In this time-lapse series of photos, progressing from top to bottom, a coating of sucrose (ordinary sugar) over a wire made of carbon nanotubes is lit at the left end, and burns from one end to the other. As it heats the wire, it drives a wave of electrons along with it, thus converting the heat into electricity.

Caption:
In this time-lapse series of photos, progressing from top to bottom, a coating of sucrose (ordinary sugar) over a wire made of carbon nanotubes is lit at the left end, and burns from one end to the other. As it heats the wire, it drives a wave of electrons along with it, thus converting the heat into electricity.
Credits:
Courtesy of the researchers

The batteries that power the ubiquitous devices of modern life, from smartphones and computers to electric cars, are mostly made of toxic materials such as lithium that can be difficult to dispose of and have limited global supplies. Now, researchers at MIT have come up with an alternative system for generating electricity, which harnesses heat and uses no metals or toxic materials.

The new approach is based on a discovery announced in 2010 by Michael Strano, the Carbon P. Dubbs Professor in Chemical Engineering at MIT, and his co-workers: A wire made from tiny cylinders of carbon known as carbon nanotubes can produce an electrical current when it is progressively heated from one end to the other, for example by coating it with a combustible material and then lighting one end to let it burn like a fuse.

That discovery represented a previously unknown phenomenon, but experiments at the time produced only a minuscule amount of current in a simple laboratory setup. Now, Strano and his team have increased the efficiency of the process more than a thousandfold and have produced devices that can put out power that is, pound for pound, in the same ballpark as what can be produced by today’s best batteries. The researchers caution, however, that it could take several years to develop the concept into a commercializable product.

The new results were published in the journal Energy & Environmental Science, in a paper by Strano, doctoral students Sayalee Mahajan PhD ’15 and Albert Liu, and five others.

Strano says “it’s actually remarkable that this [phenomenon] hasn’t been studied before.” Much of his team’s work on the project has focused on not just improving the efficiency of the process but also “developing the theory of how these things work.” And the latest experiments, he says, show good agreement between theory and experimental results, providing strong confirmation of the underlying mechanism.

Basically, the effect arises as a pulse of heat pushes electrons through the bundle of carbon nanotubes, carrying the electrons with it like a bunch of surfers riding a wave.

One key finding that helped to verify the theory is that sometimes the wave of heat produces a single voltage, but sometimes it produces two different voltage regions at the same time. “Our mathematical model can describe why that occurs,” Strano says, whereas alternative theories cannot account for this. According to the team’s theory, the thermopower wave “divides into two different components,” which sometimes reinforce one another and sometimes counter each other.

The improvements in efficiency, he says, “brings [the technology] from a laboratory curiosity to being within striking distance of other portable energy technologies,” such as lithium-ion batteries or fuel cells. In their latest version, the device is more than 1 percent efficient in converting heat energy to electrical energy, the team reports — which is “orders of magnitude more efficient than what’s been reported before.” In fact, the energy efficiency is about 10,000 times greater than that reported in the original discovery paper.

“It took lithium-ion technology 25 years to get where they are” in terms of efficiency, Strano points out, whereas this technology has had only about a fifth of that development time. And lithium is extremely flammable if the material ever gets exposed to the open air — unlike the fuel used in the new device, which is much safer and also a renewable resource.

A spoonful of sugar

While the initial experiments had used potentially explosive materials to generate the pulse of heat that drives the reaction, the new work uses a much more benign fuel: sucrose, otherwise known as ordinary table sugar. But the team believes that other combustion materials have the potential to generate even higher efficiencies. Unlike other technologies that are specific to a particular chemical formulation, the carbon nanotube-based power system works just on heat, so as better heat sources are developed they could simply be swapped into a system to improve its performance, Strano says.

Already, the device is powerful enough to show that it can power simple electronic devices such as an LED light. And unlike batteries that can gradually lose power if they are stored for long periods, the new system should have a virtually indefinite shelf life, Liu says. That could make it suitable for uses such as a deep-space probe that remains dormant for many years as it travels to a distant planet and then needs a quick burst of power to send back data when it reaches its destination.

In addition, the new system is very scalable for use in the increasingly tiny wearable devices that are emerging. Batteries and fuel cells have limitations that make it difficult to shrink them to tiny sizes, Mahajan says, whereas this system “can scale down to very small limits. The scale of this is unique.”

This work is “an important demonstration of increasing the energy and lifetime of thermopower wave-based systems,” says Kourosh Kalantar-Zadeh, a professor of electrical and computer engineering at RMIT University in Australia, who was not involved in this research. “I believe that we are still far from the upper limit that the thermopower wave devices can potentially reach,” he says. “However, this step makes the technology more attractive for real applications.”

He adds that with this technology, “We can obtain phenomenal bursts of power, which is not possible from batteries. For instance, the thermopower wave systems can be used for powering long-distance transmission units in micro- and nano-telecommunication hubs.”

MIT researchers have developed an environmentally-friendly method of generating electricity, reports Michael Casey for FOX News. Casey writes that the “breakthrough is critical because most of the batteries that power everything from smartphones to computers are made of toxic materials like lithium.”

Graphene’s behavior depends on where it sits