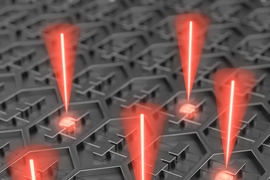 ↓ Download Image
Caption: Researchers at MIT and Sandia National Laboratories have designed a device that is an array of 37 microfabricated lasers on a single chip. Its power requirements are relatively low because the radiation emitted by all of the lasers is “phase locked,” meaning that the troughs and crests of its waves are perfectly aligned.

Caption:
Researchers at MIT and Sandia National Laboratories have designed a device that is an array of 37 microfabricated lasers on a single chip. Its power requirements are relatively low because the radiation emitted by all of the lasers is “phase locked,” meaning that the troughs and crests of its waves are perfectly aligned.
Credits:
Courtesy of the researchers

Terahertz radiation — the band of electromagnetic radiation between microwaves and visible light — has promising applications in security and medical diagnostics, but such devices will require the development of compact, low-power, high-quality terahertz lasers.

In this week’s issue of Nature Photonics, researchers at MIT and Sandia National Laboratories describe a new way to build terahertz lasers that could significantly reduce their power consumption and size, while also enabling them to emit tighter beams, a crucial requirement for most practical applications.

The work also represents a fundamentally new approach to laser design, which could have ramifications for visible-light lasers as well.

The researchers’ device is an array of 37 microfabricated lasers on a single chip. Its power requirements are so low because the radiation emitted by all of the lasers is “phase locked,” meaning that the troughs and crests of its waves are perfectly aligned. The device represents a fundamentally new way to phase-lock arrays of lasers.

In their paper, the researchers identified four previous phase-locking techniques, but all have drawbacks at the microscale. Some require positioning photonic components so closely together that they’d be difficult to manufacture. Others require additional off-chip photonic components that would have to be precisely positioned relative to the lasers. Hu and his colleagues’ arrays, by contrast, are monolithic, meaning they’re etched entirely from a single block of material.

“This whole work is inspired by antenna engineering technology,” says Qing Hu, a distinguished professor of electrical engineering and computer science at MIT, whose group led the new work. “We’re working on lasers, and usually people compartmentalize that as photonics. And microwave engineering is really a different community, and they have a very different mindset. We really were inspired by microwave-engineer technology in a very thoughtful way and achieved something that is totally conceptually new.”

This approach exploits what had previously been seen as a drawback in small lasers. Chip-scale lasers have been an active area of research for decades, for potential applications in chip-to-chip communication inside computers and in environmental and biochemical sensing. But as the dimensions of a laser shrink, the radiation the laser emits becomes more diffuse. “This is nothing like a laser-beam pointer,” Hu explains. “It really radiates everywhere, like a tiny antenna.”

If a chip-scale laser is intended to emit radiation in one direction, then any radiation it emits in lateral directions is wasted and increases its power consumption. But Hu and his colleagues’ design recaptures that laterally emitted radiation.

“I’m a firm believer that all physical phenomena can be pros or cons,” Hu says. “You can’t just say unequivocally that such-and-such a behavior is universally a good or bad thing.”

In large part, the energy from the recaptured lateral radiation is re-emitted in the direction perpendicular to the array. So the beam emitted by the array is much tighter than that emitted by other experimental chip-scale lasers. And a tight beam is essential for most envisioned applications of terahertz radiation.

In security applications, for instance, terahertz radiation would be directed at a chemical sample, which would absorb some frequencies more than others, producing a characteristic absorption fingerprint. The tighter the beam, the more radiation reaches both the sample and, subsequently, a detector, yielding a clearer signal.

Hu is joined on the paper by first author Tsung-Yu Kao, who was an MIT graduate student in electrical engineering when the work was done and is now chief technology officer at LongWave Photonics, a company that markets terahertz lasers, and by John Reno of Sandia National Laboratories.

“The use of phased arrays of antennas is widespread in the microwave and allows one to direct radiation in a very narrow beam, in a specific direction,” says Benjamin Williams, an associate professor of electrical engineering at the University of California at Los Angeles. “In the microwave, however, it is straightforward to drive each antenna with the same phase so that all the contributions to the field add up constructively in the far field. It is more complicated to do the same thing using an array of laser emitters, since you can't easily control the phase of each element. Rather, you must coax each laser emitter to phase-lock with its neighbors through some mechanism. This work has shown a new method to phase-lock large arrays of lasers.”

“The work is also important for addressing an ongoing challenge for terahertz QC [quantum cascade] lasers, namely, how can you generate a high-quality beam with good efficiency?” he adds. “This has traditionally been tough for terahertz QC lasers, since the individual laser cavities are smaller than the wavelength. It turns out that this fact means you can borrow many of the techniques from the microwave — like phased-array antennas. The work shows a high-quality beam with very high slope efficiency in a monolithic surface-emitting package.”