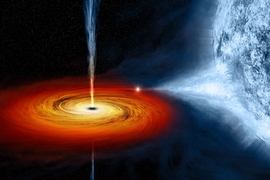 ↓ Download Image
Caption: An artist's drawing of a black hole named Cygnus X-1. It formed when a large star caved in. This black hole pulls matter from the blue star beside it.

Caption:
An artist's drawing of a black hole named Cygnus X-1. It formed when a large star caved in. This black hole pulls matter from the blue star beside it.
Credits:
Image: M.Weiss/NASA/CXC

Researchers from MIT’s Computer Science and Artificial Intelligence Laboratory, the Harvard-Smithsonian Center for Astrophysics, and the MIT Haystack Observatory have developed a new algorithm that could help astronomers produce the first image of a black hole.

The algorithm would stitch together data collected from radio telescopes scattered around the globe, under the auspices of an international collaboration called the Event Horizon Telescope. The project seeks, essentially, to turn the entire planet into a large radio telescope dish.

“Radio wavelengths come with a lot of advantages,” says Katie Bouman, an MIT graduate student in electrical engineering and computer science, who led the development of the new algorithm. “Just like how radio frequencies will go through walls, they pierce through galactic dust. We would never be able to see into the center of our galaxy in visible wavelengths because there’s too much stuff in between.”

But because of their long wavelengths, radio waves also require large antenna dishes. The largest single radio-telescope dish in the world has a diameter of 1,000 feet, but an image it produced of the moon, for example, would be blurrier than the image seen through an ordinary backyard optical telescope.

“A black hole is very, very far away and very compact,” Bouman says. “[Taking a picture of the black hole in the center of the Milky Way galaxy is] equivalent to taking an image of a grapefruit on the moon, but with a radio telescope. To image something this small means that we would need a telescope with a 10,000-kilometer diameter, which is not practical, because the diameter of the Earth is not even 13,000 kilometers.”

The solution adopted by the Event Horizon Telescope project is to coordinate measurements performed by radio telescopes at widely divergent locations. Currently, six observatories have signed up to join the project, with more likely to follow.

But even twice that many telescopes would leave large gaps in the data as they approximate a 10,000-kilometer-wide antenna. Filling in those gaps is the purpose of algorithms like Bouman’s.

Bouman will present her new algorithm — which she calls CHIRP, for Continuous High-resolution Image Reconstruction using Patch priors — at the Computer Vision and Pattern Recognition conference in June. She’s joined on the conference paper by her advisor, professor of electrical engineering and computer science Bill Freeman, and by colleagues at MIT’s Haystack Observatory and the Harvard-Smithsonian Center for Astrophysics, including Sheperd Doeleman, director of the Event Horizon Telescope project.

The Event Horizon Telescope uses a technique called interferometry, which combines the signals detected by pairs of telescopes, so that the signals interfere with each other. Indeed, CHIRP could be applied to any imaging system that uses radio interferometry.

Usually, an astronomical signal will reach any two telescopes at slightly different times. Accounting for that difference is essential to extracting visual information from the signal, but the Earth’s atmosphere can also slow radio waves down, exaggerating differences in arrival time and throwing off the calculation on which interferometric imaging depends.

Bouman adopted a clever algebraic solution to this problem: If the measurements from three telescopes are multiplied, the extra delays caused by atmospheric noise cancel each other out. This does mean that each new measurement requires data from three telescopes, not just two, but the increase in precision makes up for the loss of information.

Even with atmospheric noise filtered out, the measurements from just a handful of telescopes scattered around the globe are pretty sparse; any number of possible images could fit the data equally well. So the next step is to assemble an image that both fits the data and meets certain expectations about what images look like. Bouman and her colleagues made contributions on that front, too.

The algorithm traditionally used to make sense of astronomical interferometric data assumes that an image is a collection of individual points of light, and it tries to find those points whose brightness and location best correspond to the data. Then the algorithm blurs together bright points near each other, to try to restore some continuity to the astronomical image.

To produce a more reliable image, CHIRP uses a model that’s slightly more complex than individual points but is still mathematically tractable. You could think of the model as a rubber sheet covered with regularly spaced cones whose heights vary but whose bases all have the same diameter.

Fitting the model to the interferometric data is a matter of adjusting the heights of the cones, which could be zero for long stretches, corresponding to a flat sheet. Translating the model into a visual image is like draping plastic wrap over it: The plastic will be pulled tight between nearby peaks, but it will slope down the sides of the cones adjacent to flat regions. The altitude of the plastic wrap corresponds to the brightness of the image. Because that altitude varies continuously, the model preserves the natural continuity of the image.

Of course, Bouman’s cones are a mathematical abstraction, and the plastic wrap is a virtual “envelope” whose altitude is determined computationally. And, in fact, mathematical objects called splines, which curve smoothly, like parabolas, turned out to work better than cones in most cases. But the basic idea is the same.

Finally, Bouman used a machine-learning algorithm to identify visual patterns that tend to recur in 64-pixel patches of real-world images, and she used those features to further refine her algorithm’s image reconstructions. In separate experiments, she extracted patches from astronomical images and from snapshots of terrestrial scenes, but the choice of training data had little effect on the final reconstructions.

Bouman prepared a large database of synthetic astronomical images and the measurements they would yield at different telescopes, given random fluctuations in atmospheric noise, thermal noise from the telescopes themselves, and other types of noise. Her algorithm was frequently better than its predecessors at reconstructing the original image from the measurements and tended to handle noise better. She’s also made her test data publicly available online for other researchers to use.

With the Event Horizon Telescope project, “there is a large gap between the needed high recovery quality and the little data available,” says Yoav Schechner, a professor of electrical engineering at Israel’s Technion, who was not involved in the work. “This research aims to overcome this gap in several ways: careful modeling of the sensing process, cutting-edge derivation of a prior-image model, and a tool to help future researchers test new methods.”

“Suppose you want a high-resolution video of a baseball,” Schechner explains. “The nature of ballistic trajectory is prior knowledge about a ball's trajectory. In essence, the prior knowledge constrains the sought unknowns. Hence, the exact state of the ball in space-time can be well determined using sparsely captured data.”

“The authors of this paper use a highly advanced approach to learn prior knowledge,” he continues. “The application of this prior-model approach to event-horizon images is not trivial. The authors took on major effort and risk. They mathematically merge into a single optimization formulation a very different, complex sensing process and a learning-based image-prior model.”

Jonathan Amos reports for the BBC News that scientists around the world are close to obtaining the first image of a black hole. Data from multiple observatories will be compiled at MIT’s Haystack Observatory where “very smart imaging algorithms have had to be developed to make sense of the [Event Horizon Telescope]'s observations,” writes Amos.

TIME reporter Jeffrey Kluger writes that MIT researchers have designed an algorithm to produce an image of a black hole. Kluger explains that the algorithm will allow researchers “visualize the event horizon that surrounds the black hole at the center of our own galaxy.”

MIT researchers have developed a new algorithm to compile data gathered by the Event Horizon Telescope and create an image of a black hole, reports James Griffiths for CNN. The algorithm will “fill in the gaps and filter out the interference and noise caused by our own atmosphere,” Griffiths explains.

MIT graduate student Katie Bouman speaks with Ben Johnson of Marketplace about the algorithm she and her colleagues developed to allow people “to see the first image of a black hole.” Johnson notes the algorithm has uses beyond space exploration and could also potentially be used for MRI imaging.

Washington Post reporter Brian Fung writes that MIT researchers have developed an algorithm to create images of black holes by compiling data from radio telescopes around the world. Fung writes that the algorithm “could give us the first true images of a celestial phenomenon that, for decades, we've left to artists to imagine and describe with pictures.”

Boston Globe reporters J.D. Capelouto and Olivia Arnold write that MIT researchers have developed an algorithm aimed at producing images of black holes. MIT graduate student Katie Bouman notes that while there are predictions of what a black hole might look like, “it’s great to actually be able to probe it and…construct those images.”

An algorithm developed by MIT researchers could help produce the first image of a black hole, reports Ryan Mandelbaum for Popular Science. Mandelbaum explains that the algorithm gathers data from radio telescopes around the globe and then uses “other images from space as references to craft a sort of mosaic that best matches the data from the telescopes.”