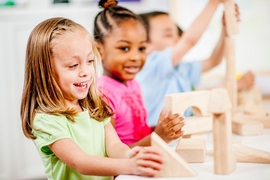 Caption:
The Kaymbu app, developed by an MIT Sloan Fellow, records and securely shares video and images of a young child’s classroom experiences with parents.

As an MIT Sloan Fellow in 2011, Kin Lo MBA ’12 felt disconnected from his daughter, who had just started preschool in Cambridge, Massachusetts. Soon, the 3-year-old would be learning a host of things there, such as numbers or the alphabet, and Lo would never get to see.

Then he had an epiphany. “Quickly I realized that, in preschool, educators want to share and document important developmental milestones, but they lack good tools to do it,” he says. “Teachers try to bridge that gap with text messaging and blogs and paper … but there was a disconnect with the way schools connect with the new generation of young, ‘digital-native’ parents.”

Tapping MIT’s entrepreneurial resources, Lo created Kaymbu, an app and iPad system for preschools and elementary classrooms (K-5) that records and securely shares video and images of a child’s learning experiences with parents. Today, more than 3,000 teachers, who teach around 25,000 students in 350 schools across 43 states, use Kaymbu, sending out roughly a million messages monthly.

“The feedback we get from teachers and parents about having a window into their child’s life, and seeing things they would have missed, is really inspiring,” Lo says.

When teachers sign up for Kaymbu, they’re provided with an iPad preloaded with the app. Teachers can capture images and videos of students and tap a button to send them to designated parents instantly. Through the system, they can also send newsletters, emails, daily records, and emergency closings. As all recordings are stored and organized, they can also be used to build student portfolios or to assess a teacher’s lessons.

Similar online resources, such as popular photo-sharing sites and social media, are not suitable for preschool environments, due to privacy issues, Lo says. Kaymbu, he says, provides secure exchanges of media with no risk of anything going public: “We take all these technologies and behaviors that we use in our personal lives and integrate them in a way that works in a special environment.”

A primary aim, Lo adds, is to help “schools and teachers to communicate easily and in a way that parents really engage with.”

Most Kaymbu customers are preschools and private K-12 schools, while about 5 percent are public schools. Kaymbu, Lo says, gives these schools a competitive edge in a vast market.

According to a 2012 report by market research organization IBIS World, in the United States there are about 53,000 commercial childcare facilities, including preschools, with combined annual revenue of $20 billion, and about 21,000 nonprofit facilities with combined annual revenue of about $13 billion. In 2012, the U.S. Bureau of Labor Statistics estimated daycare businesses could have some of the fastest employment growth of all industries through 2020. There are also about 30,860 private K-12 schools in the nation, according to the National Center for Educational Statistics.

“It’s a competitive market,” Lo says. “Parents have different options. [Schools are] looking to both stand out and develop relationships. In private K-12, their burden is to demonstrate that they can justify the cost of going to private school versus a public option.”

One of the justifications is boosted engagement with parents, which is an important factor in student achievement, Lo says. “We see schools making a lot of effort to communicate with the community, whether through a website or a blog or a parent portal, but they get low engagement,” he says. “Parents have to log into something, or it’s in a format or channel they’re not used to accessing.”

With Kaymbu, Lo says, communication is easier, so each of the million messages sent each month are usually opened twice on average. “We see amazing engagement by both parents and educators,” he says.

Additionally, Kaymbu can aid in professional development, Lo adds. Teachers can share effective lessons with other teachers, and administrators have documentation of what’s going on in multiple classrooms, so they can offer praise and feedback. “This gives [teachers and administrators] visibility into different classrooms,” Lo says.

Fake it ’til you make it

A former marketer, Lo moved, along with his wife and daughter, from Florida to Cambridge, with entrepreneurial aspirations. “I’ve always known I wanted to do something entrepreneurial or create a new product or build something,” he says. “That was my inspiration for coming to the [MIT Sloan Fellows] program.”

After dreaming up Kaymbu one day, Lo recruited MIT Sloan School of Management classmates to help develop the app out of the now-defunct MIT Beehive Cooperative, a space for MIT entrepreneurs. “Kaymbu” was Lo’s daughter way of pronouncing “Cambridge” when the family first moved to the city.

But there was one problem: They didn’t really have the engineering chops to build a pilot app for customers. So they had to be creative.

They downloaded onto a handful of iPads a free app that only allowed someone to take pictures and add captions. Then they delivered those iPads to eight different preschools in the Cambridge area, having received permission from teachers and parents. “We said, ‘Take pictures in class and add comments to them.’ At the end of the week, we’d pick the iPads up, bring them back to the Beehive, and fake the whole thing,” Lo says.

They would download the images and craft emails manually to send to parents, as if it were an automated system. Parents could also click buttons in the emails that connected them to an online forum to discuss the app. “It was this rinky-dink thing,” Lo says. “But the main thing was it worked. We got great feedback; everybody loved it.”

After a few weeks, two of the eight schools signed up as first customers for the product (and they remain customers today). In 2013, Kaymbu partnered with Boston-based app maker Rocket Insights to develop commercial Kaymbu apps and iPads. That summer, the company delivered the systems to schools across the state, before expanding nationally.

Proving Kaymbu’s commercial viability through early experiments with local schools was key to the company’s success, Lo says. This was something engrained in him through MIT Sloan classes, and through mentors at the Martin Trust Center for MIT Entrepreneurship and the Venture Mentoring Service.

“That was a theme that came through on many different settings at MIT: experiment,” he says. “Don’t try to find the perfect solution, create things quickly and get rapid feedback and adapt, and adapt, and adapt. That was the initial catalyst to getting this off the ground.”