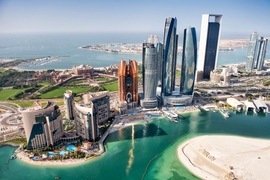 Cities generate a lot of heat, from car motors to heat-trapping pavements and structures, to the very things we use to cool our homes — air-conditioners.

These heat-radiating sources turn dense cities into urban “heat islands,” where air and surface temperatures can be higher than those of nearby rural areas by 2 to 3 degrees Celsius. The peak temperature differences can be significantly higher: 8 to 10 C, or more.

In the United Arab Emirates, where the temperature peaks at 45 C (113 F) or more during the summer and the urban population is growing rapidly, every fraction of a degree counts. A higher urban temperature results in a significant increase in air-conditioning use — an energy expense that currently accounts for 60 percent of annual and 75 percent of peak-day electricity use in Abu Dhabi.

The Masdar Institute-MIT team is developing an innovative, three-dimensional urban microclimate model of Abu Dhabi’s downtown area, which will allow the municipality to study the potential life-cycle impact of different heat island mitigation strategies. It will also be a valuable tool to inform city planners on how to optimize street layouts, building heights, park formation, neighborhood orientation, and even construction materials, to reduce the city’s heat island.

Researchers have found that Abu Dhabi’s urban heat island effect is responsible for up to 15 percent of the emirate’s yearly cooling load. Therefore, reducing the city’s extra heat could lead to a significant reduction in the emirate’s energy costs.

Since most of the country’s air-conditioners run on electricity generated by natural gas-fired power plants that emit heat-trapping greenhouse gases into the atmosphere, reducing Abu Dhabi’s cooling load would decrease the country’s carbon footprint, contributing to the UAE’s efforts to achieve a low-carbon, sustainable, and resource-efficient future.

“The more cooling you have, the more heat air-conditioning systems release into the urban environment, which then elevates the ambient temperature and further increases the cooling demand. It’s a vicious cycle,” said Masdar Institute’s Afshin Afshari, professor of practice of engineering systems and management, who is a member of the Masdar Institute-MIT research team.

The team’s model, which is the result of research that has been published in several research journals, including Energy and Buildings and Remote Sensing of Environment, is the first to couple the two complex disciplines of building energy consumption and urban microclimate.

“Very few research teams in the world approach the problem as an integrated phenomenon,” Afshari explained. “Most microclimatologists assume buildings are simple geometric obstacles with a constant temperature, and don’t look at the energy and heat the building produces, while building physicists are not interested in the urban climatology. But we see that the two phenomena are closely coupled and that their dissociation can lead to large modeling errors.”

According to Afshari, the only way to minimize the problematic heat-to-cooling-to-more-heat cycle that elevates the city’s temperature and puts a strain on the country’s electric grid, is to analyze how Abu Dhabi’s urban infrastructure impacts the city’s microclimate.

To illustrate how the urban infrastructure interacts with and raises the temperature of the urban microclimate, the Masdar Institute-MIT research team developed a 3-D computational model that demonstrates the complex process of urban thermal flow — or the flow of heat between buildings — in Abu Dhabi’s downtown area.

Through geographical models of downtown Abu Dhabi, the researchers estimated the buildings’ cooling demand as well as the heat ejected by their air-conditioning equipment into the urban environment.

By integrating the city’s climatic data, building data, and, to some extent, motorized traffic data, the model is able to provide a more complete picture of thermal flows within the city.

Currently, the team is working to validate the model by installing dozens of weather stations throughout the downtown area. The weather sensors, which are being developed in-house at the Masdar Institute, will provide accurate measurements throughout the city and will be used to calibrate the model.

“The sensors will not just be used as a one-time check for the model’s validity; the measurements of urban weather and building performance will be used to continuously improve the models through an automatic process, making the models adaptable to ongoing urban development,” said Les Norford, the George Macomber Professor in Construction Management in MIT’s Department of Architecture and MIT’s principal investigator on this project.

“This model will be a tool for city managers and planners to conduct simulation-aided design of Abu Dhabi’s downtown, showing them how the construction of an additional building, park, street, or other infrastructure will impact the urban heat flow,” said Prashanth Marpu, assistant professor of chemical and environmental engineering and Masdar Institute’s principal investigator on the project.

The model will also help city planners determine how a combination of different shading strategies will be able to reduce heat in the most optimal way.

There are many ways a city can reverse its urban heat island effect, including increasing cooling systems’ efficiency, adding vegetation to buildings (such as garden-top roofs and garden walls), and cooling paved surfaces with highly-reflective paint, to name a few.

Through this computational model, planners will be able to run several “what-if” scenarios to determine the optimal combination of various heat-reducing strategies to achieve the greatest temperature reduction in Abu Dhabi’s downtown, which will promote a more sustainable, thermally comfortable city infrastructure that could significantly improve city-dwellers’ productivity and health.

Supporting environmental sustainability in a desert city need not come at a social or economic cost. In fact, Steve Griffiths, vice president for research at Masdar Institute, believes that with the effective use of this model, the productivity and health of Abu Dhabi’s city-dwellers will increase.

“The Masdar Institute-MIT microclimate model, coupled with recent technological advancements in smart building design, will guide the development of an optimized built environment in Abu Dhabi, which could significantly increase the health and productivity of the people both inside and outside the buildings,” Griffiths said.

Optimizing for environmental factors such as air quality, temperature, noise, and lighting could have a significant influence on the well-being and productivity of people, as Griffiths recently highlighted in an op-ed published in the Innovation and Tech magazine last month. The new microclimate model could help Abu Dhabi planners optimize for these critical factors in a simple, low-cost way.

A more productive and prosperous city

As one of nine Masdar Institute-MIT active Flagship Research Projects — which are projects that brings together teams of faculty from both Masdar Institute and MIT to make a sizeable research impact for the UAE and the region — this research team represents one of the largest research groups in the Masdar Institute, pointing to the important role this project plays in developing the human and intellectual capital needed to achieve Abu Dhabi’s economic diversification goals.

“The impact from this research project is spreading to the students we teach at both MI and MIT,” Norford said. “The broader and more important impact we hope our research achieves is on professional practice. If architects, developers, and planners use our software to evaluate alternative designs and make informed decisions to locate, design, and operate buildings in ways that minimize urban heat releases and improve the thermal comfort of urban dwellers, we will have achieved our goal.”