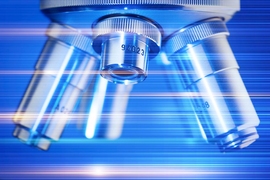 ↓ Download Image
Caption: “…[I]f a fluorescence microscope’s resolution is set at 2 micrometers, our technique can have 300 nanometer resolution — about a sixfold improvement over regular microscopes,” says MIT graduate student Frederick Sangyeon Cho. “The idea is very simple but very powerful and can be useful in many different imaging applications.”

Caption:
“…[I]f a fluorescence microscope’s resolution is set at 2 micrometers, our technique can have 300 nanometer resolution — about a sixfold improvement over regular microscopes,” says MIT graduate student Frederick Sangyeon Cho. “The idea is very simple but very powerful and can be useful in many different imaging applications.”

A new imaging technique developed by scientists at MIT, Harvard University, and Massachusetts General Hospital (MGH) aims to illuminate cellular structures in deep tissue and other dense and opaque materials. Their method uses tiny particles embedded in the material, that give off laser light.

The team synthesized these “laser particles” in the shape of tiny chopsticks, each measuring a small fraction of a human hair’s width. The particles are made from lead iodide perovskite — a material that is also used in solar panels, and that efficiently absorbs and traps light. When the researchers shine a laser beam at the particles, the particles light up, giving off normal, diffuse fluorescent light. But if they tune the incoming laser’s power to a certain “lasing threshold,” the particles will instantly generate laser light.

The researchers, led by MIT graduate student Sangyeon Cho, demonstrated they were able to stimulate the particles to emit laser light, creating images at a resolution six times higher than that of current fluorescence-based microscopes.

“That means that if a fluorescence microscope’s resolution is set at 2 micrometers, our technique can have 300-nanometer resolution — about a sixfold improvement over regular microscopes,” Cho says. “The idea is very simple but very powerful and can be useful in many different imaging applications.”

Cho and his colleagues have published their results in the journal Physical Review Letters. His co-authors include Seok Hyun Yun, a professor at Harvard; Nicola Martino, a research fellow at Harvard and MGH’s Wellman Center for Photomedicine; and Matjaž Humar, a researcher at the Jozef Stefan Institute. The research was done as part of the Harvard-MIT Division of Health Sciences and Technology.

A light in the dark

When you shine a flashlight in a darkened room, that light appears as a relatively diffuse, hazy beam of white light, representing a jumble of different wavelengths and colors. In stark contrast, laser light is a pointedly focused, monochromatic beam of light, of a specific frequency and color.

In conventional fluorescence microscopy, scientists may inject a sample of biological tissue with particles filled with fluorescent dyes. They then point a laser beam through a lens that directs the beam through the tissue, causing any fluorescent particles in its path to light up.

But these particles, like microscopic flashlights, produce a relatively indistinct, fuzzy glow. If such particles were to emit more focused, laser-like light, they might produce sharper images of deep tissues and cells. In recent years, researchers have developed laser-light-emitting particles, but Cho’s work is the first to apply these unique particles to imaging applications.

The team first synthesized tiny, 6-micron-long nanowires from lead iodide perovskite, a material that does a good job of trapping and concentrating fluorescent light. The particles’ rod-shaped geometry — which Cho describes as “chopstick-like” — can allow a specific wavelength of light to bounce back and forth along the particles’ length, generating a standing wave, or very regular, concentrated pattern of light, similar to a laser.

The researchers then built a simple optical setup, similar to conventional fluorescence microscopes, in which a laser beam is pumped from a light source, through a lens, and onto a sample platform containing the laser particles.

For the most part, the researchers found that the particles emitted diffuse fluorescent light in response to the laser stimulation, similar to conventional fluorescent dyes, at low pump power. However, when they tuned the laser’s power to a certain threshold, the particles lit up considerably, emitting much more laser light.

Cho says that the new optical technique, which they have named LAser particle Stimulated Emission (LASE) microscopy, could be used to image a specific focal plane, or a particular layer of biological tissue. Theoretically, he says, scientists can shine a laser beam into a three-dimensional sample of tissue embedded throughout with laser particles, and use a lens to focus the beam at a specific depth. Only those particles in the beam’s focus will absorb enough light or energy to turn on as lasers themselves. All other particles upstream of the path’s beam should absorb less energy and only emit fluorescent light.

“We can collect all this stimulated emission and can distinguish laser from fluorescent light very easily using spectrometers,” Cho says. “We expect this will be very powerful when applied to biological tissue, where light normally scatters all around, and resolution is devastated. But if we use laser particles, they will be the narrow points that will emit laser light. So we can distinguish from the background and can achieve good resolution.”

Giuliano Scarcelli, an assistant professor at the University of Maryland, says the technique’s success will hinge on successfully implementing it on a standard fluorescence microscope. Once that is achieved, laser imaging’s applications, he says, are promising.

“The fact that you have a laser versus fluorescence probably means you can measure deeper into tissue because you have a higher signal-to-noise ratio,” says Scarcelli, who was not involved in the work. “We’ll need to see in practice, but on the other hand, with optics, we have no good way of imaging deep tissue. So any research on this topic is a welcome addition.”

To implement this technique in living tissue, Cho says laser particles would have to be biocompatible, which lead iodide perovskite materials are not. However, the team is currently investigating ways to manipulate cells themselves to glow like lasers.

“Our idea is, why not use the cell as an internal light source?” Cho says. “We’re starting to think about that problem.”