Automation helps us in many ways, but does it steal our sense of self?
Peter Dizikes | MIT News Office
Publication Date:
Press Inquiries 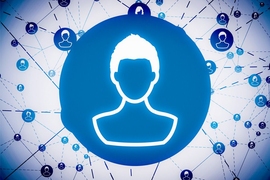 ↓ Download Image
Caption: “Algorithms, Identity, and Society” was held before a capacity audience at MIT’s Bartos Theater, and sponsored by MIT’s noted program in Science, Technology, and Society. 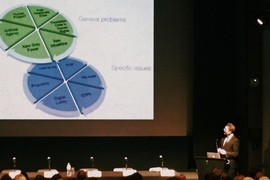 Caption:
“Algorithms, Identity, and Society” was held before a capacity audience at MIT’s Bartos Theater, and sponsored by MIT’s noted program in Science, Technology, and Society.

The vast global trend toward computer-driven automation is usually discussed in terms of technological capabilities and their economic consequences. Navigation systems tell you where to drive, and Siri gives you quick answers, but technology’s ability to replace people’s jobs means there are usually some trade-offs when innovations take hold.

Less frequently, we step back and consider the implications of automation on our own psyches and identities: What does it mean to be making our way in a world where we are guided around by computers, given answers on phones, and highly bound to networked technology?

A set of high-profile scholars and authors faced that issue head-on Wednesday night at an MIT forum, presenting some sharply divergent perspectives about the implications of technology on our selves.

“What makes us happy is facing hard challenges … and overcoming them,” said Nicholas Carr, the Pulitzer-nominated author of “The Shallows” and other books that cast a skeptical light on technology’s effects.

By limiting human capacities too quickly, too much automation ensures that “we’re going to run into trouble,” Carr added in one of two central talks at the forum.

In the central point of his critique, Carr suggested we are creating a decidedly nonvirtuous circle between the advances of automation and the attenuation of human capabilities: The “de-skilling” of people, he said, leads to “dependency” on information technology, a condition from which it is hard for people to regain the abilities they once had.

But Luciano Floridi, a professor at the Oxford University Internet Institute, in the event’s second featured talk, offered a more sanguine outlook about the human-machine relationship.

“There is a huge de-skilling going on always,” said Floridi. “I wouldn’t even know how to start shoeing a horse. … Skills come and go.”

Instead, Floridi suggested, there could develop a large social split between those using technology to develop new skills and those not doing so.

“I think this polarization is going to stay with us,” Floridi said.

The event, “Algorithms, Identity, and Society: The Politics of Information,” was held before a capacity audience at MIT’s Bartos Theater, and sponsored by MIT’s program in Science, Technology, and Society (STS). The event, as STS chair David Kaiser noted, was held in part to commemorate the 40th anniversary of the STS program, long one of the leaders in the field.

The remarks of Carr and Floridi were followed by short commentaries from a trio of MIT professors who have written extensively about the relationship between people and technology.

Sherry Turkle, the Abby Rockefeller Mauzé Professor of the Social Studies of Science and Technology at MIT, warned against what she called “the logic of substitution” in human-machine interactions, in which machines, especially robots, become accepted as replacements for face-to-face contact.

Consider robots used to help the elderly, as Turkle explained. In these cases, she said, the concept that robots are “better than nothing” for people can quickly transform into the idea that they are “better than anything.”

Yet as Turkle added, “The point of talking to older people was the compact of generations.” Ignoring that, she implied, means we may be using technology to substitute for our social and ethical obligations to other people.

David Mindell, the Frances and David Dibner Professor of the History of Engineering and Manufacturing in STS and a professor of aeronautics and astronautics, suggested that advances in technology often challenge our sense of self-definition as people. We may define ourselves in terms of seemingly singular abilities, only to find that computers can eventually develop those capacities too.

The question, Mindell said, is “how to stay a humanist without being an essentialist,” if our apparently core qualities are not unique.

For engineers, he added, a key issue would be to develop designs that are “respectful and human-centered” rather than aiming for a total replacement of human capacities.

“What Nick [Carr] calls an ethical challenge, I would call a design challenge,” Mindell said.

And Jennifer Light, a professor in STS and the Department of Urban Studies and Planning (DUSP), suggested that the power of computing could engender a restricted view of human needs and social complexity. Consider urban life, Light said: It is by definition hard to measure subjective considerations such as quality of life, or unrecorded activities in a city’s underground economy. The hope of designing “smart cities,” she noted, is therefore restricted to what can be measured, and likely to be incomplete.

“Quantification can offer only one way of seeing the world,” Light said.

Optimist, pessimist, or both?

Carr and Floridi, while not sparring directly with one another, observed that they do have different personal sensibilities about technology’s consequences. Carr quipped that he is a pessimist about technology about four days a week; Floridi responded that he himself is an optimist in about the same proportion.

“The future seems open to me,” Floridi said.

The largest problems we face, Floridi suggested, are not technological but existential; whereas in recent decades people faced the challenge of rebuilding society after World War II, today our sense of purpose has faltered: “What exactly is the human project we are pursuing today? It’s unclear.”

Carr, for his part, anticipates a faltering of purpose coming in decades ahead, as more and more people find their occupations and pastimes rendered redundant by the expansion of automation. Or, as he concluded on Wednesday: “What’s going to happen that’s going to absorb the skills and talents and desires of 7 billion people?”