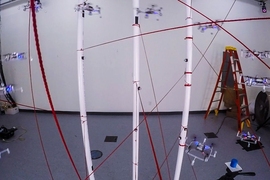 ↓ Download Image
Caption: In a forest simulation, algorithms segment space into “obstacle-free regions” and then link them together to find a single collision-free route.
Credits: Photo courtesy of the researchers. 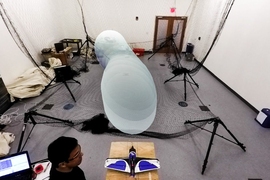 ↓ Download Image
Caption: In a related project, a planner searches a library of pre-computed funnels and selects one that doesn't intersect with the obstacles.
Credits: Photo courtesy of the researchers.

Caption:
In a forest simulation, algorithms segment space into “obstacle-free regions” and then link them together to find a single collision-free route.
Credits:
Photo courtesy of the researchers.

Caption:
In a related project, a planner searches a library of pre-computed funnels and selects one that doesn't intersect with the obstacles.
Credits:
Photo courtesy of the researchers.

Getting drones to fly around without hitting things is no small task. Obstacle-detection and motion-planning are two of computer science’s trickiest challenges, because of the complexity involved in creating real-time flight plans that avoid obstacles and handle surprises like wind and weather.

In a pair of projects announced this week, researchers from MIT’s Computer Science and Artificial Intelligence Laboratory (CSAIL) demonstrated software that allow drones to stop on a dime to make hairpin movements over, under, and around some 26 distinct obstacles in a simulated “forest.” 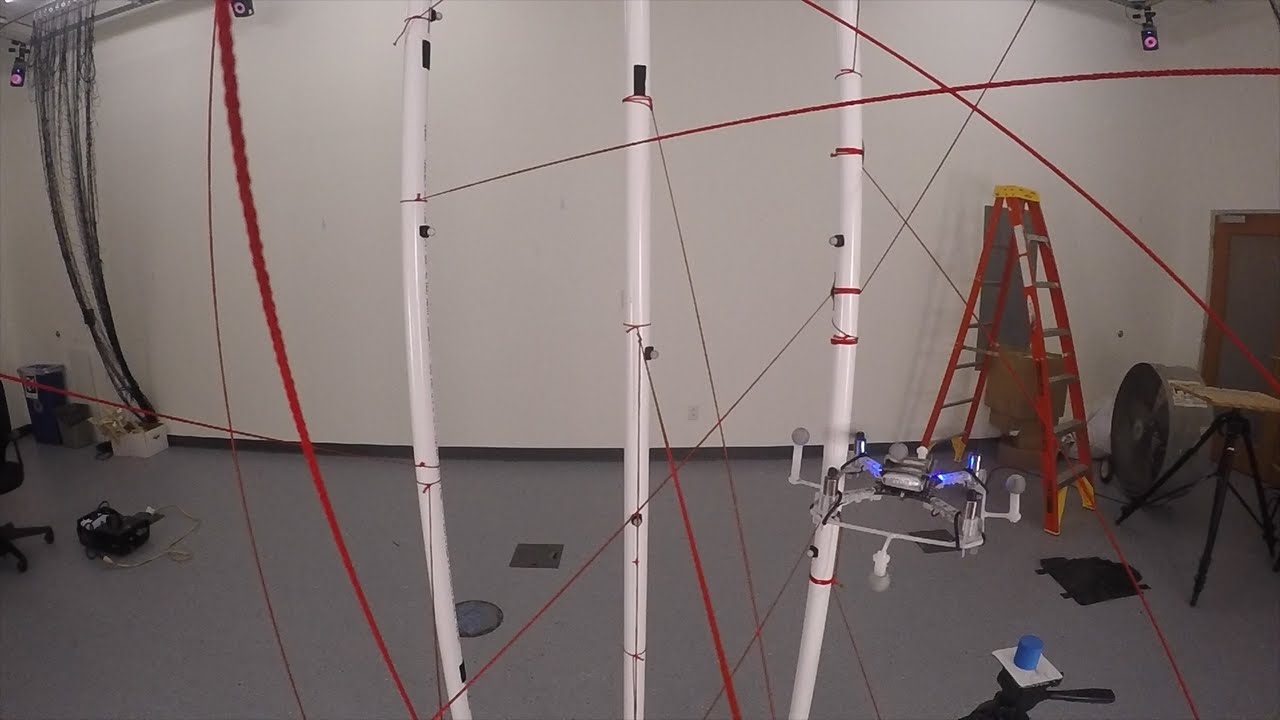 One team’s video shows a small quadrotor doing donuts and figure-eights through an obstacle course of strings and PVC pipes. Weighing just over an ounce and clocking in at 3 and a half inches from rotor to rotor, the drone can fly through the 10-square-foot space at speeds upwards of 1 meter per second.

The team’s algorithms, which are available online and were previously used to plan footsteps for CSAIL’s Atlas robot at last year's DARPA Robotics Challenge, segment space into “obstacle-free regions” and then link them together to find a single collision-free route.

“Rather than plan paths based on the number of obstacles in the environment, it’s much more manageable to look at the inverse: the segments of space that are ‘free’ for the drone to travel through,” says recent graduate Benoit Landry '14 MNG '15, who was first author on a related paper just accepted to the IEEE International Conference on Robotics and Automation (ICRA). “Using free-space segments is a more ‘glass-half-full’ approach that works far better for drones in small, cluttered spaces.”

In a second CSAIL project, PhD student Anirudha Majumdar showed off a fixed-wing plane that is guaranteed to avoid obstacles without any advanced knowledge of the space, and even in the face of wind gusts and other dynamics. His approach was to pre-program a library of dozens of distinct “funnels” that represent the worst-case behavior of the system, calculated via a rigorous verification algorithm.

“As the drone flies, it continuously searches through the library to stitch together a series of paths that are computationally guaranteed to avoid obstacles,” says Majumdar, who was lead author on a related technical report. “Many of the individual funnels will not be collision-free, but with a large-enough library you can be certain that your route will be clear.”

Both papers were co-authored by MIT professor Russ Tedrake; the ICRA paper, which will be presented in May in Sweden, was also co-written by PhD students Robin Deits and Peter R. Florence.

A bird might make it seem simple, but flight is a highly complicated endeavor. A flying object can change position in six distinct directions — forward/backward (“surge”), up/down (“heave”), left/right (“sway”), and by rotating front-to-back (“pitch”), side-to-side (“roll”), and horizontally (“yaw”).

“At every moment in time there are 12 distinct numbers needed to describe where the system it is and how quickly it is moving, on top of simultaneously tracking other objects in the space that could get in your way,” says Majumdar. “Most techniques typically can’t handle this sort of complexity in real-time.”

One common motion-planning approach is to sample the whole space through algorithms like the “rapidly-exploring random tree.” Although often effective, sampling-based approaches are generally less efficient and have trouble navigating small gaps between obstacles.

Landry’s team opted to use Deits’ new free-space-based technique, which he calls the “Iterative Regional Inflation by semidefinite programming” algorithm (IRIS). They then coupled IRIS with a “mixed-integer semidefinite program” (MISDP) that assigns specific flight movements to each “space-free region” and then executes the full plan.

To sense its surroundings, the drone used motion-capture optical sensors and an on-board inertial measurement unit (IMU) that help estimate the precise positioning of obstacles.

“I’m most impressed by the team’s ingenious technique of combining on- and off-board sensors to determine the drone's location,” says Jingjin Yu, an assistant professor of computer science at Rutgers University. “This is key to the system’s ability to create unique routes for each set of obstacles."

In its current form, MISDP has been optimized such that it can’t do real-time planning; it takes an average of 10 minutes to create a route for the obstacle course. But Landry says that making certain sacrifices would let them generate plans much more quickly.

“For example, you could define ‘free-space regions’ more broadly as links between areas where two or more free-space regions overlap,” says Landry. “That would let you solve for a general motion-plan through those links, and then fill in the details with specific paths inside of the chosen regions. Currently we solve both problems at the same time to lower energy consumption, but if we wanted to run plans faster that would be a good option.”

Majumdar’s software, meanwhile, generates more conservative plans, but can do so in real-time. He first developed a library of 40 to 50 trajectories that are each given an outer bound that the drone is guaranteed to remain within. These bounds can be visualized as ”funnels” that the planning algorithm chooses between to stitch together a sequence of steps that allow the drone to plan its flying on the fly.

A flexible approach like this comes with a high level of guarantees that the software will work, even in the face of uncertainties with both the surroundings and the hardware itself. The algorithm can easily be extended to drones of different sizes and payloads, as well as ground vehicles and walking robots.

As for the environment, imagine the drone choosing between making a forceful roll maneuver that will avoid a tree by a large margin, versus flying straight and avoiding a tree by a small amount.

“A traditional approach might prefer the first since avoiding obstacles by a significant amount seems ‘safer,’” Majumdar says. “But a move like that actually may be riskier because it’s more susceptible to wind gusts. Our method makes these decisions in real-time, which is critical if we want drones to move out of the labs and operate in real-world scenarios.”

A clear path to avoiding obstacles

CSAIL researchers have been working on this problem for many years. Professor Nick Roy has been honing algorithms for drones to develop maps and avoid objects in real-time; in November a team led by PhD student Andrew Barry published a video demonstrating algorithms that allow a drone to dart between trees at speeds of 30 miles per hour.

While these two drones cannot travel quite as fast as Barry’s, their maneuvers are generally more complex, meaning that they can navigate in smaller, denser environments.

“Enabling dynamic flight of small, off-the-shelf quadcopters is a marvelous achievement, and one that has many potential applications,” Yu says. “With additional development, I can imagine these machines being used as probes in hard-to-reach places, from exploring caves to doing search-and-rescue in collapsed buildings.”

Landry, who now works for 3D Robotics in California, is hopeful that other academics will build on and refine the researchers’ work, which is all open-source and available on github.

“A big challenge for industry is determining which technologies are actually mature enough to use in real products,” Landry says. “The best way to do that is to conduct experiments that focus on all of the corner cases and can demonstrate that algorithms like these will actually work 99.999 percent of the time.”

Researchers from MIT CSAIL have developed an algorithm that allows drones to navigate obstacle courses, reports Kelsey Atherton for Popular Science. “As drones move away from simple remote-controlled toys and become more autonomous flying tools, programs like these will keep them flying safely through unfamiliar terrain,” explains Atherton.

Connecting, protecting, and informing the next generation of first responders