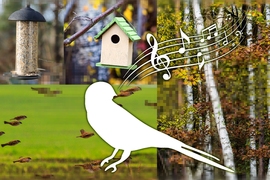 ↓ Download Image
Caption: The researchers’ neural network was fed video from 26 terabytes of video data downloaded from the photo-sharing site Flickr. Researchers found the network can interpret natural sounds in terms of image categories. For instance, the network might determine that the sound of birdsong tends to be associated with forest scenes and pictures of trees, birds, birdhouses, and bird feeders.

Caption:
The researchers’ neural network was fed video from 26 terabytes of video data downloaded from the photo-sharing site Flickr. Researchers found the network can interpret natural sounds in terms of image categories. For instance, the network might determine that the sound of birdsong tends to be associated with forest scenes and pictures of trees, birds, birdhouses, and bird feeders.
Credits:
Image: Jose-Luis Olivares/MIT

In recent years, computers have gotten remarkably good at recognizing speech and images: Think of the dictation software on most cellphones, or the algorithms that automatically identify people in photos posted to Facebook.

But recognition of natural sounds — such as crowds cheering or waves crashing — has lagged behind. That’s because most automated recognition systems, whether they process audio or visual information, are the result of machine learning, in which computers search for patterns in huge compendia of training data. Usually, the training data has to be first annotated by hand, which is prohibitively expensive for all but the highest-demand applications.

Sound recognition may be catching up, however, thanks to researchers at MIT’s Computer Science and Artificial Intelligence Laboratory (CSAIL). At the Neural Information Processing Systems conference next week, they will present a sound-recognition system that outperforms its predecessors but didn’t require hand-annotated data during training.

Instead, the researchers trained the system on video. First, existing computer vision systems that recognize scenes and objects categorized the images in the video. The new system then found correlations between those visual categories and natural sounds.

“Computer vision has gotten so good that we can transfer it to other domains,” says Carl Vondrick, an MIT graduate student in electrical engineering and computer science and one of the paper’s two first authors. “We’re capitalizing on the natural synchronization between vision and sound. We scale up with tons of unlabeled video to learn to understand sound.”

“Even humans are ambiguous,” says Yusuf Aytar, the paper’s other first author and a postdoc in the lab of MIT professor of electrical engineering and computer science Antonio Torralba. Torralba is the final co-author on the paper.

“We did an experiment with Carl,” Aytar says. “Carl was looking at the computer monitor, and I couldn’t see it. He would play a recording and I would try to guess what it was. It turns out this is really, really hard. I could tell indoor from outdoor, basic guesses, but when it comes to the details — ‘Is it a restaurant?’ — those details are missing. Even for annotation purposes, the task is really hard.”

When coupled with GPS data, for instance, a sound-recognition system could determine that a cellphone user is in a movie theater and that the movie has started, and the phone could automatically route calls to a prerecorded outgoing message. Similarly, sound recognition could improve the situational awareness of autonomous robots.

“For instance, think of a self-driving car,” Aytar says. “There’s an ambulance coming, and the car doesn’t see it. If it hears it, it can make future predictions for the ambulance — which path it’s going to take — just purely based on sound.”

Vondrick, Aytar, and Torralba first trained a neural net on two large, annotated sets of images: one, the ImageNet data set, contains labeled examples of images of 1,000 different objects; the other, the Places data set created by Oliva's group and Torralba's group, contains labeled images of 401 different scene types, such as a playground, bedroom, or conference room.

Once the network was trained, the researchers fed it the video from 26 terabytes of video data downloaded from the photo-sharing site Flickr. “It’s about 2 million unique videos,” Vondrick says. “If you were to watch all of them back to back, it would take you about two years.” Then they trained a second neural network on the audio from the same videos. The second network’s goal was to correctly predict the object and scene tags produced by the first network.

The result was a network that could interpret natural sounds in terms of image categories. For instance, it might determine that the sound of birdsong tends to be associated with forest scenes and pictures of trees, birds, birdhouses, and bird feeders.

For that, the researchers did use a database of annotated audio — one with 50 categories of sound and about 2,000 examples. Those annotations had been supplied by humans. But it’s much easier to label 2,000 examples than to label 2 million. And the MIT researchers’ network, trained first on unlabeled video, significantly outperformed all previous networks trained solely on the 2,000 labeled examples.

“With the modern machine-learning approaches, like deep learning, you have many, many trainable parameters in many layers in your neural-network system,” says Mark Plumbley, a professor of signal processing at the University of Surrey. “That normally means that you have to have many, many examples to train that on. And we have seen that sometimes there’s not enough data to be able to use a deep-learning system without some other help. Here the advantage is that they are using large amounts of other video information to train the network and then doing an additional step where they specialize the network for this particular task. That approach is very promising because it leverages this existing information from another field.”

Plumbley says that both he and colleagues at other institutions have been involved in efforts to commercialize sound recognition software for applications such as home security, where it might, for instance, respond to the sound of breaking glass. Other uses might include eldercare, to identify potentially alarming deviations from ordinary sound patterns, or to control sound pollution in urban areas. “I really think that there’s a lot of potential in the sound-recognition area,” he says.