Caption:
The left-most column shows the frame before the action begins, with the algorithm's prediction below it. The right columns show the next frames of the video.
Credits:
Image: Carl Vondrick/MIT CSAIL

Caption:
Given an input frame (left), the deep-learning model has multiple neural networks that each predict an action. The system then merges those actions into one that it uses as its prediction.
Credits:
Image: Carl Vondrick/MIT CSAIL

When we see two people meet, we can often predict what happens next: a handshake, a hug, or maybe even a kiss. Our ability to anticipate actions is thanks to intuitions born out of a lifetime of experiences.

Machines, on the other hand, have trouble making use of complex knowledge like that. Computer systems that predict actions would open up new possibilities ranging from robots that can better navigate human environments, to emergency response systems that predict falls, to Google Glass-style headsets that feed you suggestions for what to do in different situations.

This week researchers from MIT’s Computer Science and Artificial Intelligence Laboratory (CSAIL) have made an important new breakthrough in predictive vision, developing an algorithm that can anticipate interactions more accurately than ever before.

Trained on YouTube videos and TV shows such as “The Office” and “Desperate Housewives,” the system can predict whether two individuals will hug, kiss, shake hands or slap five. In a second scenario, it could also anticipate what object is likely to appear in a video five seconds later. 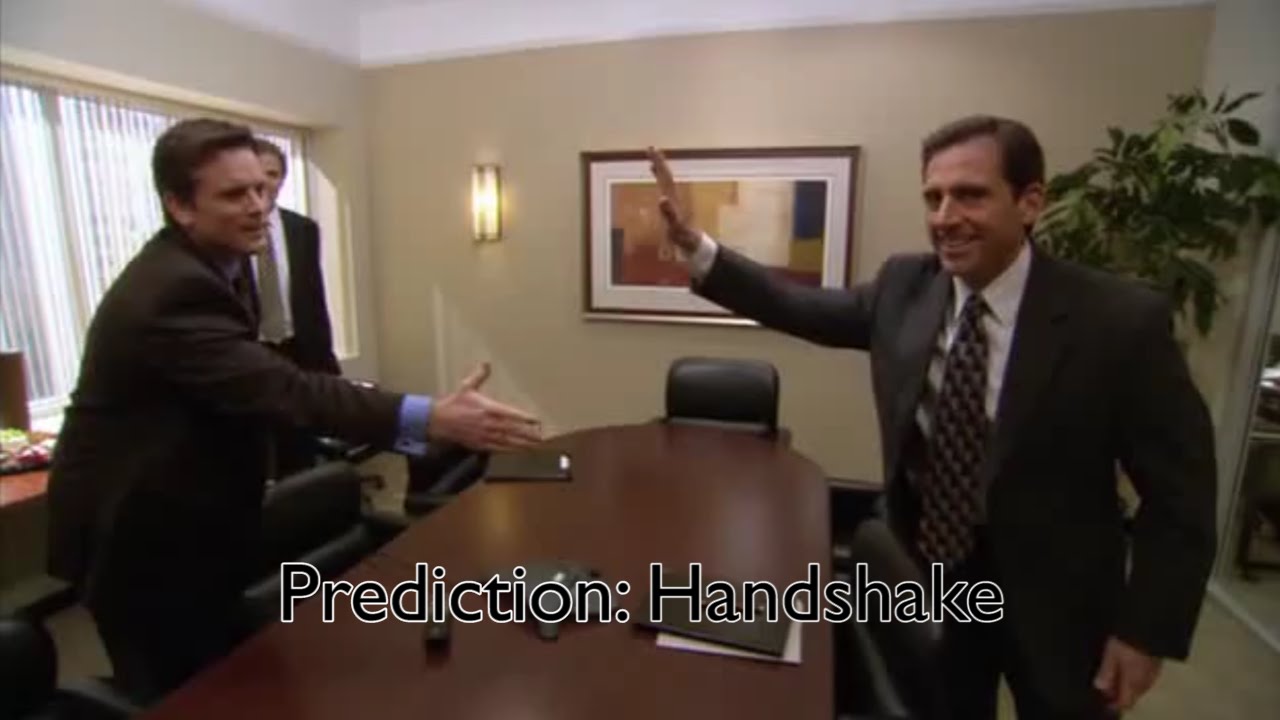 Play video
An MIT machine-learning system analyzed television shows including “The Office” and “Desperate Housewives” in order to predict human interactions such as hugging, kissing, shaking hands, or slapping five.

While human greetings may seem like arbitrary actions to predict, the task served as a more easily controllable test case for the researchers to study.

“Humans automatically learn to anticipate actions through experience, which is what made us interested in trying to imbue computers with the same sort of common sense,” says CSAIL PhD student Carl Vondrick, who is first author on a related paper that he will present this week at the International Conference on Computer Vision and Pattern Recognition (CVPR). “We wanted to show that just by watching large amounts of video, computers can gain enough knowledge to consistently make predictions about their surroundings.”

Vondrick’s co-authors include MIT Professor Antonio Torralba and former postdoc Hamed Pirsiavash, now a professor at the University of Maryland.

Past attempts at predictive computer-vision have generally taken one of two approaches.

The first method is to look at an image’s individual pixels and use that knowledge to create a photorealistic “future” image, pixel by pixel — a task that Vondrick describes as “difficult for a professional painter, much less an algorithm.” The second is to have humans label the scene for the computer in advance, which is impractical for being able to predict actions on a large scale.

The CSAIL team instead created an algorithm that can predict “visual representations,” which are basically freeze-frames showing different versions of what the scene might look like.

“Rather than saying that one pixel value is blue, the next one is red, and so on, visual representations reveal information about the larger image, such as a certain collection of pixels that represents a human face,” Vondrick says.

The team’s algorithm employs techniques from deep-learning, a field of artificial intelligence that uses systems called “neural networks” to teach computers to pore over massive amounts of data to find patterns on their own.

Each of the algorithm’s networks predicts a representation is automatically classified as one of the four actions — in this case, a hug, handshake, high-five, or kiss. The system then merges those actions into one that it uses as its prediction. For example, three networks might predict a kiss, while another might use the fact that another person has entered the frame as a rationale for predicting a hug instead.

“A video isn’t like a ‘Choose Your Own Adventure’ book where you can see all of the potential paths,” says Vondrick. “The future is inherently ambiguous, so it’s exciting to challenge ourselves to develop a system that uses these representations to anticipate all of the possibilities.”

After training the algorithm on 600 hours of unlabeled video, the team tested it on new videos showing both actions and objects.

When shown a video of people who are one second away from performing one of the four actions, the algorithm correctly predicted the action more than 43 percent of the time, which compares to existing algorithms that could only do 36 percent of the time.

In a second study, the algorithm was shown a frame from a video and asked to predict what object will appear five seconds later. For example, seeing someone open a microwave might suggest the future presence of a coffee mug. The algorithm predicted the object in the frame 30 percent more accurately than baseline measures, though the researchers caution that it still only has an average precision of 11 percent.

It’s worth noting that even humans make mistakes on these tasks: for example, human subjects were only able to correctly predict the action 71 percent of the time.

“There’s a lot of subtlety to understanding and forecasting human interactions,” says Vondrick. “We hope to be able to work off of this example to be able to soon predict even more complex tasks.”

While the algorithms aren’t yet accurate enough for practical applications, Vondrick says that future versions could be used for everything from robots that develop better action plans to security cameras that can alert emergency responders when someone who has fallen or gotten injured.

“I’m excited to see how much better the algorithms get if we can feed them a lifetime’s worth of videos,” says Vondrick. “We might see some significant improvements that would get us closer to using predictive-vision in real-world situations.”

The work was supported by a grant from the National Science Foundation, along with a Google faculty research award for Torralba and a Google PhD fellowship for Vondrick.

MIT researchers have developed a new algorithm to create videos from still images, writes G. Clay Whittaker for Popular Science. “The system "learns" types of videos (beach, baby, golf swing...) and, starting from still images, replicates the movements that are most commonly seen in those videos,” Whittaker explains.

CSAIL researchers used videos of popular TV shows to train an algorithm to predict how two people will greet one another. “[T]he algorithm got it right more than 43 percent of the time, as compared to the shoddier 36 percent accuracy achieved by algorithms without the TV training,” notes Janet Burns in Forbes.

Mary Beth Griggs writes for Popular Science that CSAIL researchers have created an algorithm that can predict human interaction. Griggs explains that the algorithm could “lead to artificial intelligence that is better able to react to humans or even security cameras that could alert authorities when people are in need of help.”

CSAIL researchers have trained a deep-learning program to predict interactions between two people, writes Hope King for CNN. “Ultimately, MIT's research could help develop robots for emergency response, helping the robot assess a person's actions to determine if they are injured or in danger,” King explains.

Dan Misener writes for CBC News that CSAIL researchers have developed an algorithm that can predict interactions between two people. PhD student Carl Vondrick explains that the algorithm is "learning, for example, that when someone's hand is outstretched, that means a handshake is going to come."