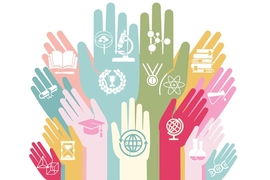 Numerous innovations have hit life science labs in the past decade, such as new techniques for designing DNA and editing genomes. Yet, researchers still rely on older tools — such as paper notebooks, Excel spreadsheets, and email — to manage data collected from those innovations. This means time is wasted organizing, finding, and duplicating information before even starting new experiments.

Using Benchling, researchers can design, record, analyze, share, and constantly update data in the cloud. Generated data can be shared with members of a team, and other scientists around the world. Benchling has, on average, increased scientist productivity by up 30 to 50 percent, automating organizational tasks and reducing experiment duplication, according to feedback from users, says MIT co-founder Saji Wickramasekara. “It really impacts the productivity and day-to-day life of researchers,” he says.

Wickramasekara and MIT alumnus Ashu Singhal ’11 invented the platform as a pet project to assist fellow researchers at the Institute. Now, Benchling — lauded by the media as the “Google Docs” for life sciences — is being used by more than 50,000 researchers at more than 1,000 research institutions worldwide, including by more than 600 students and professors at MIT.

“We built this from the ground up, combining the modules scientists use from day to day … into a simple, intelligent platform,” Wickramasekara says. “Ultimately, we want to empower scientists to further scale the pace of discovery.”

Each year, pharmaceutical companies spend around $5 billion to bring one drug to market, and the industry spends roughly $150 billion on research and development through various programs. But a lot of gathered data must be manually updated and shared across various physical and digital resources, which wastes time and money.

Consider, for example, a biologist who wants to design and test new DNA pieces. Using traditional methods, the researcher plans the experiment on a paper notebook and an email calendar. Then, the researcher will use several different software packages to design DNA, analyze data, and document results.

None of those modules talk to each other; any changes made to data must be updated across all sources, “which sometimes doesn’t happen at all,” Wickramasekara says. Sometimes, in fact, valuable data goes missing or gets buried in spreadsheets or email attachments, he adds. And if scientists want to further collaborate on experiments, they generally exchange information via email, teleconferences, and meetings.

“Many scientists at times feel like glorified note-takers,” Wickramasekara says. “Due to the lack of integrated tool suites for life sciences researchers, [they] spend about 30 percent of their time flipping between different apps, figuring out how to share data that they’ve generated, and performing tasks that can be automated. That’s where Benchling steps in.”

Using Benchling, a biologist, for instance, will plan an experiment in a digital notebook, complete with integrated calendar entries and to-do lists. They then use an interface that combines 10 or more different molecular biology apps, such as a CRISPR guide design tool, plasmid visualizations, a sequence repository, and a genomic library to annotate DNA. After running tests in the lab, the biologist can document their work in a digital lab notebook, and everything syncs together. Scientists can later run detailed queries in a unique biological registration tool to, say, find samples below a specific pH level and their specific locations in the physical lab.

Increasingly, scientists are publishing academic papers with links to their data hosted on Benchling, Wickramasekara says. “Then they have this living document that, when corrections come in or they make adjustments, they add that new data and can keep one repository updated,” he says. “The data is not archived anymore — it’s living.”

Today, Benchling users operate in the fields of synthetic biology, industrial biotechnology, genomics, gene therapy, antibody discovery, immuno-oncology, and others. They’re primarily from universities such as MIT, Stanford University, and Harvard University, as well as roughly 100 global biotech and pharmaceutical companies, such as Editas Medicine, Voyager Therapeutics, and Zymergen.

But Benchling aims, in the long term, to “democratize research,” Wickramasekara says. The plan is to add features that allow users to work, collaborate, and outsource experiments with contract research organizations, or CROs, which provide research services to the life-science labs, a common practice in the industry.

Scientists could, for instance, design an experiment in Benchling, outsource that experiment to CROs, and analyze and record the returned results in Benchling, all from their laptop. “That means research is no longer restricted to the wealthy and few — like just at MIT and Harvard, or the most well-resourced pharmaceutical companies,” Wickramasekara says. “Everyone [will have] access to the best possible labs in the world and can conduct experiments at the push of a button.”

Wickramasekara and Singhal initially came to MIT to study life sciences but soon turned to computer science and electrical engineering. In doing so, they observed the software industry had something the life sciences industry lacked: efficient online collaboration.

“In software, you can build a great product with a team of people from around the world. You have tools to collaborate and code effectively, and if some part of that process is suboptimal, an engineer somewhere will improve it, and the entire industry moves forward,” Wickramasekara says. “But the way that we work together on research [in life sciences] hasn’t really changed in the past decade.”

In 2012, they built a prototype for Benchling “to scratch our own itch” for making collaboration easier, Wickramasekara says. This first iteration, made strictly for DNA editing, was provided to a small number of researchers at MIT and Stanford. And it gained momentum: Graduate students saw it as a time-saver, while professors enjoyed collecting and archiving data, in one place, from a constant flow of students, Wickramasekara says. “We had a really passionate group of early adopters … and it grew from there,” he says.

In 2012, the startup was accepted into the YCombinator startup accelerator in Mountain View, California, and earned $900,000 in seed funding. The startup has raised a combined $13 million in funding since inception.

Over the years, Benchling has used the “number-one resource MIT has to offer, which is the people,” Wickramasekara says. Benchling’s first employees and investors, as well as many members of the current engineering team, hailed from MIT. “The company you build is as good as the team you recruit,” Wickramasekara says. “Being able to hit the ground running and hire so many super talented people from the MIT network was our key competitive advantage.”

Sajith Wickramasekara ‘15 and Ashu Singhal ’11 co-founded Benchling, a software company designed to make it easier to keep track of laboratory data. The company has now acquired Overwatch, a software company for customers working in preclinical biopharma research, reports Alex Knapp for Forbes. “It [the acquisition] fits really nicely in the direction our company is heading,” says Wickramasekara. “It really helps us extend our offering, especially for biopharma where we’re growing a lot.”