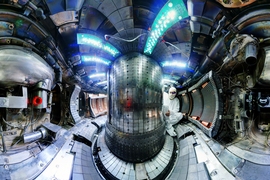 Caption:
The Alcator C-Mod team celebrates the record setting plasma discharge on Alcator C-Mod the evening of its last planned day of operation. The leader of the group, senior research scientist Earl Marmar, (front, blue shirt), performed the required tweaks to the machine operation, advised by the large interdisciplinary, interinstitutional, and international team.

On Friday, Sept. 30, at 9:25 p.m. EDT, scientists and engineers at MIT’s Plasma Science and Fusion Center made a leap forward in the pursuit of clean energy. The team set a new world record for plasma pressure in the Institute’s Alcator C-Mod tokamak nuclear fusion reactor. Plasma pressure is the key ingredient to producing energy from nuclear fusion, and MIT’s new result achieves over 2 atmospheres of pressure for the first time.

Nuclear fusion has the potential to produce nearly unlimited supplies of clean, safe, carbon-free energy. Fusion is the same process that powers the sun, and it can be realized in reactors that simulate the conditions of ultrahot miniature “stars” of plasma — superheated gas — that are contained within a magnetic field.

For over 50 years it has been known that to make fusion viable on the Earth’s surface, the plasma must be very hot (more than 50 million degrees), it must be stable under intense pressure, and it must be contained in a fixed volume. Successful fusion also requires that the product of three factors — a plasma’s particle density, its confinement time, and its temperature — reaches a certain value. Above this value (the so-called “triple product”), the energy released in a reactor exceeds the energy required to keep the reaction going.

Pressure, which is the product of density and temperature, accounts for about two-thirds of the challenge. The amount of power produced increases with the square of the pressure — so doubling the pressure leads to a fourfold increase in energy production.

During the 23 years Alcator C-Mod has been in operation at MIT, it has repeatedly advanced the record for plasma pressure in a magnetic confinement device. The previous record of 1.77 atmospheres was set in 2005 (also at Alcator C-Mod). While setting the new record of 2.05 atmospheres, a 15 percent improvement, the temperature inside Alcator C-Mod reached over 35 million degrees Celsius, or approximately twice as hot as the center of the sun. The plasma produced 300 trillion fusion reactions per second and had a central magnetic field strength of 5.7 tesla. It carried 1.4 million amps of electrical current and was heated with over 4 million watts of power. The reaction occurred in a volume of approximately 1 cubic meter (not much larger than a coat closet) and the plasma lasted for two full seconds.

Other fusion experiments conducted in reactors similar to Alcator have reached these temperatures, but at pressures closer to 1 atmosphere; MIT’s results exceeded the next highest pressure achieved in non-Alcator devices by approximately 70 percent.

While Alcator C-Mod’s contributions to the advancement of fusion energy have been significant, it is a science research facility. In 2012 the DOE decided to cease funding to Alcator due to budget pressures from the construction of ITER. Following that decision, the U.S. Congress restored funding to Alcator C-Mod for a three-year period, which ended on Sept. 30.

“This is a remarkable achievement that highlights the highly successful Alcator C-Mod program at MIT,” says Dale Meade, former deputy director at the Princeton Plasma Physics Laboratory, who was not directly involved in the experiments. “The record plasma pressure validates the high-magnetic-field approach as an attractive path to practical fusion energy.”

“This result confirms that the high pressures required for a burning plasma can be best achieved with high-magnetic-field tokamaks such as Alcator C-Mod,” says Riccardo Betti, the Robert L. McCrory Professor of Mechanical Engineering and Physics and Astronomy at the University of Rochester.

Alcator C-Mod is the world’s only compact, high-magnetic-field fusion reactor with advanced shaping in a design called a tokamak (a transliteration of a Russian word for “toroidal chamber”), which confines the superheated plasma in a donut-shaped chamber. C-Mod’s high-intensity magnetic field — up to 8 tesla, or 160,000 times the Earth’s magnetic field — allows the device to create the dense, hot plasmas and keep them stable at more than 80 million degrees. Its magnetic field is more than double what is typically used in other designs, which quadruples its ability to contain the plasma pressure.

C-Mod is third in the line of high-magnetic-field tokamaks, first advocated by MIT physics professor Bruno Coppi, to be built and operated at MIT. Ron Parker, a professor of electrical engineering and computer science, led its design phase. Professor Ian Hutchinson of the Department of Nuclear Science and Engineering led its construction and the first 10 years of operation through 2003.

Unless a new device is announced and constructed, the pressure record just set in C-Mod will likely stand for the next 15 years. ITER, a tokamak currently under construction in France, will be approximately 800 times larger in volume than Alcator C-Mod, but it will operate at a lower magnetic field. ITER is expected to reach 2.6 atmospheres when in full operation by 2032, according to a recent Department of Energy report.

Alcator C-Mod is also similar in size and cost to nontokamak magnetic fusion options being pursued by private fusion companies, though it can achieve pressures 50 times higher. “Compact, high-field tokamaks provide another exciting opportunity for accelerating fusion energy development, so that it’s available soon enough to make a difference to problems like climate change and the future of clean energy — goals I think we all share,” says Dennis Whyte, the Hitachi America Professor of Engineering, director of the Plasma Science and Fusion Center, and head of the Department of Nuclear Science and Engineering at MIT.

These experiments were planned by the MIT team and collaborators from other laboratories in the U.S. — including the Princeton Plasma Physics Laboratory, the Oak Ridge National Laboratory, and General Atomics — and conducted on the Alcator C-Mod’s last day of operation. The Alcator C-Mod facility, which officially closed after 23 years of operation on Sept. 30, leaves a profound legacy of collaboration. The facility has contributed to more than 150 PhD theses and dozens of interinstitutional research projects.

To understand how Alcator C-Mod’s design principles could be applied to power generation, MIT’s fusion group is working on adapting newly available high-field, high-temperature superconductors that will be capable of producing magnetic fields of even greater strength without consuming electricity or generating heat. These superconductors are a central ingredient of a conceptual pilot plant called the Affordable Robust Compact (ARC) reactor, which could generate up to 250 million watts of electricity.

Scientists, students, and faculty from the Alcator C-Mod team will discuss fusion, the pressure record, Alcator C-Mod, and the high-field approach at an Ask Me Anything Session on Reddit on Thursday, Oct. 20, at 1 p.m. EDT.

Damian Carrington writes for The Guardian that MIT researchers set a new world record for the highest plasma pressure ever recorded using the Alcator C-Mod reactor. Carrington notes that the “MIT record shows that using very high magnetic fields to contain the plasma may be the most promising route to practical nuclear fusion reactors.”

On the edge of discovery