Caption:
AI<sup>2</sup> combs through data and detects suspicious activity using unsupervised machine-learning. It then presents this activity to human analysts, who confirm which events are actual attacks, and incorporate that feedback into its models for the next set of data.
Credits:
Image: Kalyan Veeramachaneni/MIT CSAIL

Today’s security systems usually fall into one of two categories: human or machine. So-called “analyst-driven solutions” rely on rules created by living experts and therefore miss any attacks that don’t match the rules. Meanwhile, today’s machine-learning approaches rely on “anomaly detection,” which tends to trigger false positives that both create distrust of the system and end up having to be investigated by humans, anyway.

But what if there were a solution that could merge those two worlds? What would it look like? 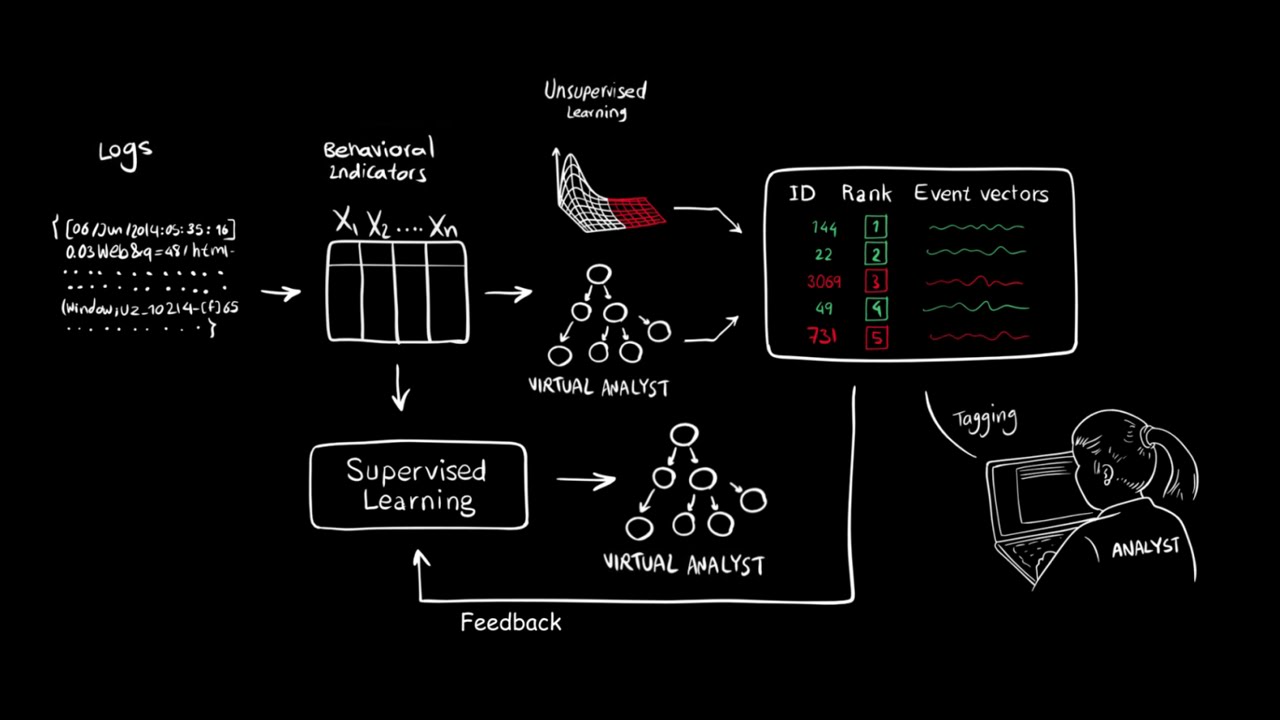 Play video
In a new paper, researchers from MIT's Computer Science and Artificial Intelligence Lab and the machine-learning startup PatternEx have demonstrated an artificial-intelligence platform called AI² that can predict 85 percent of cyber-attacks, by continuously incorporating input from human experts.

The team showed that AI2 can detect 85 percent of attacks, which is roughly three times better than previous benchmarks, while also reducing the number of false positives by a factor of 5. The system was tested on 3.6 billion pieces of data known as “log lines,” which were generated by millions of users over a period of three months.

To predict attacks, AI2 combs through data and detects suspicious activity by clustering the data into meaningful patterns using unsupervised machine-learning. It then presents this activity to human analysts who confirm which events are actual attacks, and incorporates that feedback into its models for the next set of data.

“You can think about the system as a virtual analyst,” says CSAIL research scientist Kalyan Veeramachaneni, who developed AI2 with Ignacio Arnaldo, a chief data scientist at PatternEx and a former CSAIL postdoc. “It continuously generates new models that it can refine in as little as a few hours, meaning it can improve its detection rates significantly and rapidly.”

For example, let’s say you want to develop a computer-vision algorithm that can identify objects with high accuracy. Labeling data for that is simple: Just enlist a few human volunteers to label photos as either “objects” or “non-objects,” and feed that data into the algorithm.

But for a cybersecurity task, the average person on a crowdsourcing site like Amazon Mechanical Turk simply doesn’t have the skillset to apply labels like “DDOS” or “exfiltration attacks,” says Veeramachaneni. “You need security experts.”

That opens up another problem: Experts are busy, and they can’t spend all day reviewing reams of data that have been flagged as suspicious. Companies have been known to give up on platforms that are too much work, so an effective machine-learning system has to be able to improve itself without overwhelming its human overlords.

AI2’s secret weapon is that it fuses together three different unsupervised-learning methods, and then shows the top events to analysts for them to label. It then builds a supervised model that it can constantly refine through what the team calls a “continuous active learning system.”

Specifically, on day one of its training, AI2 picks the 200 most abnormal events and gives them to the expert. As it improves over time, it identifies more and more of the events as actual attacks, meaning that in a matter of days the analyst may only be looking at 30 or 40 events a day.

“This paper brings together the strengths of analyst intuition and machine learning, and ultimately drives down both false positives and false negatives,” says Nitesh Chawla, the Frank M. Freimann Professor of Computer Science at the University of Notre Dame. “This research has the potential to become a line of defense against attacks such as fraud, service abuse and account takeover, which are major challenges faced by consumer-facing systems.”

The team says that AI2 can scale to billions of log lines per day, transforming the pieces of data on a minute-by-minute basis into different “features”, or discrete types of behavior that are eventually deemed “normal” or “abnormal.”

“The more attacks the system detects, the more analyst feedback it receives, which, in turn, improves the accuracy of future predictions,” Veeramachaneni says. “That human-machine interaction creates a beautiful, cascading effect.”

Anant Agarwal, president of edX, and Kalyan Veeramachaneni, a principal research scientist at LIDS, are featured on Fast Company’s 2017 list of the “Most Creative People in Business.” Agarwal is celebrated for “mastering online education,” and Veeramachaneni for developing a system that enables humans and AI to work together to detect possible security threats.

Wired reporter Brian Barrett writes that MIT researchers have developed a new system to help detect cyber-attacks. Barrett explains that the system, “reviews data…and pinpoints anything suspicious. A human takes it from there, checking for signs of a breach. The one-two punch identifies 86 percent of attacks while sparing analysts the tedium of chasing bogus leads.”