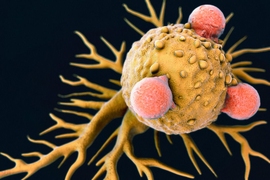 Caption:
An illustration of T Lymphocytes on a Cancer Cell.
Credits:
Image: iStock

The human immune system is poised to spring into action at the first sign of a foreign invader, but it often fails to eliminate tumors that arise from the body’s own cells. Cancer biologists hope to harness that untapped power using an approach known as cancer immunotherapy.

Orchestrating a successful immune attack against tumors has proven difficult so far, but a new study from MIT suggests that such therapies could be improved by simultaneously activating both arms of the immune system. Until now, most researchers have focused on one of two strategies: attacking tumors with antibodies, which activate the innate immune system, or stimulating T cells, which form the backbone of the adaptive immune system.

By combining these approaches, the MIT team was able to halt the growth of a very aggressive form of melanoma in mice.

“An anti-tumor antibody can improve adoptive T-cell therapy to a surprising extent,” says Dane Wittrup, the Carbon P. Dubbs Professor in Chemical Engineering at MIT. “These two different parts of the immune therapy are interdependent and synergistic.”

Wittrup, an associate director of MIT’s Koch Institute for Integrative Cancer Research and also a faculty member in the Department of Biological Engineering, is the senior author of a paper describing the work this week in the journal Cancer Cell. Lead authors are graduate students Eric Zhu and Cary Opel and recent PhD recipient Shuning Gai.

Antibody drugs for cancer, which include rituximab and Herceptin, are believed to work by binding to cancer proteins and blocking the signals that tell cancer cells to divide uncontrollably. They may also draw the attention of cells belonging to the innate immune system, such as natural killer cells, which can destroy tumor cells.

Adoptive T cell therapy, on the other hand, enlists the body’s T cells to attack tumors. Billions of T cells flow through the average person’s bloodstream at any given time, each specialized to recognize different molecules. However, many tumor proteins do not provoke T cells to attack, so T cells must be removed from the patient and programmed to attack a specific tumor molecule.

Wittrup and his colleagues made the discovery that they could generate both types of immune responses while they were experimenting with improving antibody drug performance with a signaling molecule called IL-2, which helps boost immune responses.

Scientists have tried this strategy before, and about a dozen such therapies have gone through phase I clinical trials. However, most of these efforts failed, even though the antibody-IL-2 combination usually works very well against cancer cells grown in a lab dish.

The MIT team realized that this failure might be caused by the timing of IL-2 delivery. When delivered to cells in a dish, IL-2 sticks around for a long time, amplifying the response of natural killer cells against cancer cells. However, when IL-2 is injected into a patient’s bloodstream, the kidneys filter it out within an hour.

Wittrup and his colleagues overcame this by fusing IL-2 to part of an antibody molecule, which allows it to circulate in the bloodstream for much longer. In tests in mice with a very aggressive form of melanoma, the researchers found they could stop tumor growth by delivering this engineered form of IL-2, along with antibody drugs, once a week.

To their surprise, the researchers found that T cells were the most important component of the anti-tumor response induced by the antibody-IL-2 combination. They believe that the synergy of IL-2-induced cells and cytokines, and the antibody treatment, creates an environment that lets T cells attack more effectively.

Cells called neutrophils, which are considered the immune system’s “first line of defense” because they react strongly to foreign invaders that enter the skin through a cut or other injury, were also surprisingly important.

“They’re a really powerful force in your immune system, but people in immunotherapy don’t usually focus on neutrophils. They don’t really consider them as a viable tool,” Zhu says. “It pointed us to the idea that although T cells and natural killer cells are important, maybe we’re forgetting about a part of the immune system that is also really important and could help us achieve our goals of ultimately curing the tumors.”

The researchers also found that when they delivered an antibody, IL-2, and T cells targeted to the tumor, the adoptively transferred T cells killed cancer cells much more successfully than when only T cells were delivered. In 80 to 90 percent of the mice, tumors disappeared completely; even when tumor cells were reinjected into the mice months after the original treatment, their immune systems destroyed the cells, preventing new tumors from forming

In a related paper that appeared recently in the Proceedings of the National Academy of Science, the MIT team also found that delivering IL-2 bound to any kind of antibody, even if the antibody did not target a protein on the tumor cell surface, would halt or slow tumor growth, especially if additional doses of the antibody alone were also given. Graduate student Alice Tzeng was the lead author of that study.

The researchers are now exploring additional proteins that could be added to the IL-2 and antibody combination to make immunotherapy more effective. In the meantime, simply giving patients more prolonged exposure to IL-2 could improve the effectiveness of existing antibody drugs, Wittrup says.