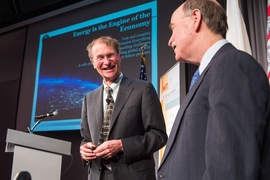 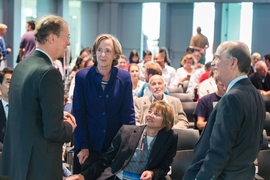 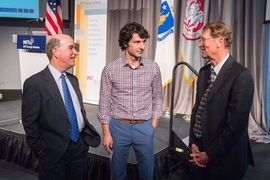 Lynn Orr, undersecretary for science and energy at the U.S. Department of Energy (DOE), spoke at MIT Thursday about the department’s newly issued Quadrennial Technology Review, which sums up the top priorities for research over the next four years. The report was the result of a long process and, according to Orr, provides “a snapshot of where we stand in the energy technology world, and an assessment of where the research opportunities lie.”

The report should be useful, Orr said, for the DOE itself and for universities, industry, and “pretty much anybody who’s interested in the energy landscape.” He explained that the report outlines approaches to energy research based on three overriding goals: economic security, energy security, and environmental security.

To illustrate what basic research in energy technologies can accomplish — and why it’s essential to accelerate that process as much as possible — Orr cited the steam engine, which at its invention in the 1700s was only 0.5 percent efficient at converting heat energy into work. Over time, he added, the efficiency of systems for converting fuel to energy has improved to “north of 70 percent or so — but it took 300 years to get there.”

Orr expressed the hope that progress on new energy technologies will proceed faster than that, but added, “It does tell you when a lot of smart engineers and scientists and industrial researchers put their minds to it, a lot of good stuff can happen.”

Orr was sworn in as undersecretary for science and energy last December. In this role, he is the principal advisor on clean energy technologies and science and energy research initiatives to Secretary of Energy Ernest Moniz — who was previously a longtime member of the MIT faculty and founding director of the MIT Energy Initiative (MITEI), which was the host for Orr’s talk.

“The Quadrennial Technology Review provides an important assessment of our current national energy technology portfolio, and highlights many of the areas we need to prioritize for the future,” said Robert Armstrong, MITEI’s current director. “From our perspective, expanding long-term federal funding for basic energy research is one of the most essential steps our government can take to help meet the country’s energy demands by 2050.”

“He’s a giant voice and a very prominent figure in energy,” Ruben Juanes, an associate professor of civil and environmental engineering, said in introducing Orr. Juanes was one of Orr’s graduate students at Stanford University.

“We have an opportunity now, and that opportunity is to transform the energy systems for this country, and indeed the world,” Orr said. Doing so, he added, requires effectively managing the complex of interacting systems that affect energy production and use.

The new DOE report has chapters covering each of the major areas of energy production and use, including solar, wind, and nuclear power; carbon capture and sequestration for fossil-fuel plants; the electric grid; and energy storage systems. Each topic is also covered in much greater detail in a set of single-topic assessments accompanying the main report.

Orr described the nation’s electric grid as “the connective tissue that ties it all together.” As part of the American Recovery and Reinvestment Act of 2009, the DOE was able to lay the groundwork for a more responsive and coordinated electrical grid. This work, he said, should help react quickly to shifts in both energy supply and demand, helping to foster adoption of intermittent renewable sources, and improving security by detecting anomalies in the grid quickly enough to cut off problem areas and prevent widespread blackouts. While most of the capabilities of these systems have not yet been fully used, he said, they “offer the opportunity for much better services.”

One important means of smoothing out imbalances in electricity supply and demand is energy storage, Orr explained. Such systems are important from grid-scale systems down to the level of better automobile batteries. Storage systems can also be important at a variety of time scales — from fractions of a second, for grid fluctuations, to hours or days, for grid storage. These provide plenty of opportunities for researchers in developing both new devices and new system architectures, he said.

Since most of the nation’s electricity still comes from fossil fuels, developing cost-effective ways of reducing carbon emissions from such plants is a key research area, Orr said. “It’s been demonstrated that you can capture CO2 with solvents,” he said. “There’s no question about that; it’s done at commercial scale every day.”

But this approach is relatively expensive, and absent a clear price on carbon, he cautioned: “It’s going to be hard to see this at scale.”

As for nuclear power, Orr argued that one of the most promising developments is the design of small modular reactors that could be assembled in factories and trucked to operating sites, potentially creating improvements in cost, safety, and flexibility.

Some areas of research, he noted, have the potential to impact multiple types of energy. For example, turbines are used in almost every kind of power plant, and advances in turbine design show great promise in drastically cutting their size and complexity — and therefore, in slashing costs.

Wind already represents 5 percent of the nation’s electricity production, and is likely to keep growing, Orr said, noting that there’s opportunity to improve on the design of wind-farm systems at scale. And solar power has experienced “huge reductions in cost” in the last few years, but still has room for significant improvements, especially in the costs of supporting systems. Advanced materials for solar generation also offer the hope of huge cost reductions in the future. “My guess is that we will use the sun for an ever-increasing part of the energy mix,” Orr said.

But some improvements could flow from just making full use of what we already have. For example, since 75 percent of all energy generated ends up in buildings, Orr said, just having full adoption of the best existing appliances in those buildings would cut energy use by 20 percent. Full use of other existing systems, including better windows, lighting, and heating and cooling systems, could provide even greater gains.