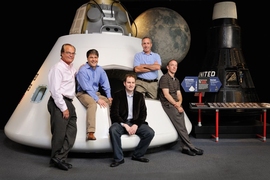 Behind many of these advertisements lies an exact science — based on rocket science, in fact — powered by MIT “programmatic marketing” startup DataXu.

Founded in 2008, the startup leverages big data to choose the most relevant advertisements for users in real-time, with aims of helping companies see the greatest return on investment (ROI) in online marketing. “We’re helping companies compete in a world that’s full of data,” says MIT alumnus Bill Simmons PhD ’08, DataXu’s co-founder and chief technology officer, who co-invented the software.

In less than one millisecond, the software determines which advertisement from a pool of clients will most likely ensure that a user will act — by clicking through or eventually purchasing a product — while calculating the cost of the advertisement down to fractions of a penny. It also learns patterns for advertisements that will work best for certain users, or groups of users.

Historically, marketing has not been an exact science, Simmons says, with ROI outcomes based on rough approximations. But DataXu, he says, is unique in accurately measuring ROI for clients.

“Being an MIT-born startup, we’re trying to solve a really hard problem, which is actually measuring and understanding which type of advertisement delivers value,” Simmons says. “We’re very interested in … how to build more efficient businesses by making the marketing more scientific.”

In 2004, Simmons began his PhD in aeronautics and astronautics at MIT, working on systems architecture under Ed Crawley, the Ford Professor of Engineering, along with DataXu co-founder Sandro Catanzaro SM ’06.

One project involved building a kernel called object-processing networks (OPN) that narrowed down best designs for system architecture based on numerous variables. An example, as described in Simmons’ PhD thesis, is sifting through countless combinations of crews and technologies to design successful rocket launches.

This work soon earned Simmons, Catanzaro, and other MIT researchers a NASA grant to build software that could determine the most feasible manned Mars missions. Using OPN, they weighed every combination of mission parameter — such as orbit trajectory, crew, rocket size, and technology — and winnowed down a potential 35 billion missions to a mere 1,162. The resulting 1,000-page report, presented to NASA, “totally blew them away,” Simmons says.

But the real innovation behind the algorithms was speed. Simulating all 35 billion missions “would have taken forever,” Simmons says. But the MIT team’s algorithms could identify and immediately dismiss any logical mismatches that would render a combination even partially infeasible. “You can tell if a combination is infeasible very early and eliminate that choice, just cut them off early,” Simmons explains. This, he says, dramatically decreased the simulation times.

DataXu’s software works similarly, but makes roughly 1.5 million decisions per second to decide if an ad should be placed before a specific user. This is done during a process called “real-time bidding.” When a user opens a webpage, an “auction” begins for all advertisement space, requiring rapid-fire bids from participating advertising firms. Winning bidders receive each available spot. There are billions of opportunities per day, and transactions happen within 100 milliseconds.

During these auctions, DataXu chooses from a pool of about 100,000 advertisements provided by about 1,000 clients, to pick the advertisement for each opportunity that will best fit the user, weighing the user’s profile information, device used, time of day, and other parameters. “In 10 milliseconds, we’re able to shrink the set of potential advertisements to a small set and calculate how much it’s worth, with a high precision in response, at a very high speed,” Simmons says.

After presenting to NASA, Simmons and Catanzaro, who had launched five startups in his native Peru, soon started toying around with the idea of bringing their speedy algorithms to commercial applications in financial planning, airline planning, architecture, health care, and other industries.

Through Crawley, a seasoned entrepreneur who had already founded four startups, they connected with about 15 local angel investors who funded research and development for the software based solely on the team’s NASA work — even with no specific application in mind. “It was amazing to me, as a rookie entrepreneur, that people would write checks for that — but they did,” Simmons says.

Late in 2008, after Simmons graduated, the three co-founders — which then also included Bruce Journey, former CEO and president of MIT Technology Review — met with the marketing branches of Google and Yahoo, where they learned about a rising trend of real-time bidding. “We said, ‘Here’s a brand-new market we can be in on early,’” Simmons says.

But for Simmons, a researcher-turned-entrepreneur, pitching to venture capitalists required some refining: Much like going over novel technologies in MIT labs, Simmons would begin each business pitch discussing the technology’s limitations. “But no one wants to hear about that in a business setting — all they want is the capabilities,” Simmons says, laughing. “I had to learn to become a businessperson.”

Soon, however, Mike Baker, another seasoned tech entrepreneur, jumped on board as CEO. And with Baker, Journey, and Catanzaro leading its business side, DataXu secured nearly $8 million during its first funding round in 2009 — and garnered an additional $48 million over the next five years.

Today the Boston-based startup has just surpassed the 300-employee mark, and operates in more than 50 countries. For Simmons, this rapid growth is surreal — especially, he says, for a company that started during the nation’s economic recession. “I see all these people working hard and doing things to move the company forward,” he says. “It just has a life of its own now.”