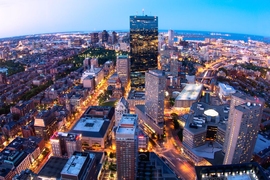 Big data may soon make buildings greener. With a recent major acquisition, MIT alumni-founded Retroficiency, which has assessed hundreds of thousands of buildings, is poised to bring its advanced energy analytics platform to millions of commercial buildings.

According to the Environmental Protection Agency (EPA), 6 million U.S. commercial and industrial buildings account for roughly 45 percent of greenhouse gas emissions and, on average, 30 percent of the energy in those buildings is wasted. The EPA also estimates that improving the energy efficiency of those buildings by just 10 percent could significantly reduce greenhouse gas emissions, by an amount equivalent to taking 30 million vehicles off the road.

Retroficiency, recently acquired by the energy and sustainability company Ecova, has been tackling that problem with a software data analytics platform that comprehensively analyzes the energy usage in thousands of buildings serviced by a utility company. It then shows the utility specific energy-conservation measures that buildings can take — such as replacing heating, ventilation, and air conditioning (HVAC) units, or even adjusting a thermostat — to cut wasted energy.

“We started this company with a very specific mission in mind: To scale energy efficiency in commercial buildings and to help change the world,” Fisher says. “The difference is we now have the platform and resources to go do it. The next few years will be the fulfillment of that mission.”

Increasingly, regulators and customers are pressing utilities to find better ways to save energy. Many times, companies send auditors from building to building to gauge the efficiency of lights and HVAC units and offer suggestions for savings, which can take weeks and cost thousands of dollars, Fisher says.

But Retroficiency offers a fully automated approach, which makes it scalable, Fisher says. “Our ability to take in consumption data and analyze buildings without a manual touch point enables us to analyze those buildings in a matter of minutes, and scale cost-effectively to hundreds of thousands of assets,” he says.

To do so, Retroficiency grabs energy consumption data — such as monthly bills and interval data from meters — from thousands to hundreds of thousands of commercial buildings serviced by a utility company. That data is combined with publicly available information — such as local weather, the age of the building’s equipment, and types of windows — to determine energy use patterns.

From that data analytics process, Retroficiency creates unique thermodynamic energy models for each building and can show current energy consumption at the end-use level and propose building-specific measures to improve efficiency.

Some buildings, for instance, may leave the lights on overnight or when no one is there, or simply fail to adjust a thermostat when heating or cooling isn’t needed. Retroficiency will inform the utility company of the exact buildings that should implement solutions to those issues, such as adjusting lighting times or thermostat settings.

The platform can also detect defective or outdated equipment for potential repairs or replacements, says Long, now Retroficiency’s chief technology officer. “We can see how the HVAC system responds to heat and we can tell, generally speaking, if it’s stressed, or undersized, or out of maintenance,” he says. The same goes for inefficient light bulbs that could use an upgrade. All data analytics is done remotely.

The utility companies can use this information, say, through a Retroficiency-powered Web portal to let customers check in on their energy usage and savings opportunities, or to give the data to account managers at energy service providers who engage with building managers about how to increase efficiency.

Over the years, Retroficiency has uncovered surprising data for building efficiency.

In a 2014 analysis of 30,000 commercial buildings in New York, for instance, the company predicted that small, seasonal changes in thermostat temperatures — even by just 1 degree — could save $145 million, or about 2 percent of the energy across all buildings studied. Additionally, replacing inefficient windows could save $227 million in energy costs, or about 4.5 percent of the energy.

That study marked the first in Retroficiency’s Building Genome Project, which aims to map the distinct markers, equipment, and operational characteristics that influence how buildings function in major cities around the world. The company plans to launch similar studies at different cities in the future.

Energy savings also extend to outdated or replaceable technologies. The T12 fluorescent light bulbs, for instance, were supposedly largely phased out of commercial buildings due to their inefficiency — but that’s always not the case.

“Someone in industry will say, ‘No one has T12s anywhere,’” Long says. “What we can find is they do exist and those folks, for whatever reason, haven’t done anything. There’s more opportunity [for savings] than people realize — the analytics allows you to figure out what area to investigate first.”

Fisher and Long met in 2007 as classmates at MIT Sloan. Fisher had a background in commercial real estate and understood building-inefficiency challenges; Long had spent 10 years as a software engineer at the U.S. Department of Transportation’s Volpe Center, a research and development facility for transportation issues.

Both came to MIT with entrepreneurship in mind. “The beautiful part of MIT is they bring together some diverse people that are all passionate about similar things — one of which is building a company,” Fisher says.

Seeking to design energy efficiency technologies, they combined forces to build an initial prototype of the Retroficiency software: Fisher had the industry knowledge; Long had the engineering chops. “It was a lot of Bennett saying, ‘This is what I want,’ and me saying, ‘Yeah, I can do that,’” Long says.

In their final year at MIT Sloan, Fisher and Long launched Retroficiency with help from many experts and entrepreneurial mentors on campus. Among those were early advisor Sarah Slaughter, a visiting lecturer in civil and environmental engineering and then-director of MIT Sloan’s sustainability initiative; current advisor Shari Loessberg, a senior lecturer of technological innovation, entrepreneurship, and strategic management; and tech-savvy students from the Building Technology group.

“The [MIT] community has led to some awesome colleagues to help us save the world together,” Fisher says. “Connecting with awesome people to answer the right questions, at the right time, has been an invaluable opportunity of being associated with MIT.”