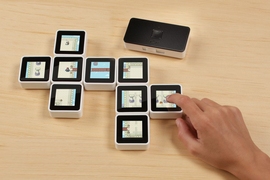 ↓ Download Image
Caption: Among the games designed for the Sifteo Cubes were adventure games, like the one shown here, where users uncover sections of a maze for characters by moving cubes up and down, and putting them adjacent to each other.
Credits: Courtesy of Sifteo

Caption:
Among the games designed for the Sifteo Cubes were adventure games, like the one shown here, where users uncover sections of a maze for characters by moving cubes up and down, and putting them adjacent to each other.
Credits:
Courtesy of Sifteo

In 2011, alumni David Merrill SM ’04, PhD ’09 and Jeevan Kalanithi SM ’07 had turned a Media Lab project into a popular gaming platform, Sifteo Cubes: plastic blocks, about an inch and a half on each side, equipped with color touch displays. Sensors detect the blocks’ movements and nearby blocks, and wireless technology allows them to communicate with each other to enable games and educational experiences.

People can pile, group, sort, tilt, and knock the cubes together to play various games, developed by Sifteo and a community of developers. Some games are simple, such as bouncing a ball across multiple displays, or educational, such as unscrambling words by sliding the tiles into the right order. There are also adventure games, where users uncover sections of a maze for characters by moving cubes up and down, and putting them adjacent to each other.

Energized by Merrill’s 2009 TED Talk on the devices, which went viral, Sifteo’s first run of 1,000 cubes sold out in just 13 hours. For a few years, Sifteo’s first- and second-generation cubes found a niche customer base, while catching the eye of electronics and hardware companies enamored with the novel devices.

Among those interested parties was hobbyist drone manufacturer 3DR, which acquired Sifteo last July, noting in a press release Sifteo’s expertise in bringing innovative consumer electronics to a wide customer base. (Sifteo Cubes have since been taken out of production.)

Now members of the Sifteo team — including Kalanithi and Merrill — will help 3DR build out the consumer drone market over the next few years. While he can’t provide details, Kalanithi says, “It’s really about a desire to build drones at scale that can get into the hands of everyone.”

Connecting at the Media Lab

The Sifteo story began one spring afternoon in 2006. Kalanithi and Merrill, who became friends as Stanford University undergraduates and had reconnected at MIT, were at a table in the Media Lab’s kitchen, brainstorming ways in which people could use their hands to physically interact with data.

At the time, the two were becoming deeply immersed in the Media Lab’s tangible-computation culture, taking classes like MAS 834 (Tangible Interfaces) and working with other students on sensor networks and “smart” devices. “Those ideas were constantly bouncing around in our heads,” Kalanithi says.

In that conversation, they landed on a novel idea: “smart blocks” for people to physically manipulate computer data. “You have all this information — emails, desktop files, photos — and one mouse pointer to interact with it, like having a single finger tip,” Merrill says. “If you had a pile of LEGOs on the table, you’d use both hands and your body – pushing the piles around. We wanted to build an interface for interacting with information on a computer that was more like a pile of LEGOs.”

Initially labeling the system “The Siftable Computer,” Kalanithi and Merrill built prototypes — tiles of wood and acrylic, with photos plastered on them — to experiment with in the lab, explaining their vision and gaining feedback.

At the time, for his MIT thesis, Kalanithi was developing electronic devices called “Connectibles,” which he described as “tangible social media.” These wirelessly connected tiles — equipped, for instance, with a dial that illuminated onboard LEDs — could be exchanged and plugged into outlets on a plywood board. If two people exchanged Connectibles, for instance, whenever they turned on the lights of their own tiles, the lights of the exchanged Connectibles would also illuminate.

For this project, Kalanithi was implanting working displays into the tiles. “We thought, ‘We can use these little displays for smart blocks,’” he says.

Nine months of prototyping — with help from other Media Lab students — led to Siftables, small computers that could display images and sense nearby blocks and movement. They could be stacked and shuffled to do math, and play music and basic games. “From the original core — physical embodiment of digital information — the details emerged through a series of prototypes and bouncing ideas off other smart people at the Media Lab,” Merrill says.

Bull by the horns

But things changed dramatically in 2009 when Merrill delivered a TED Talk on Siftables, as part of a larger focus on Media Lab projects. A video of the talk went viral, amassing 1 million views and garnering interest from the press, tech circles, and consumers.

“We thought we had to take the bull by the horns,” Kalanithi says. “We could either make them into cool research tools in low volumes, or we could fully commercialize them as far and wide as possible.”

Later that year, the two launched Sifteo in San Francisco, and started completely re-engineering the Siftables code and hardware with cheaper parts for mass production. They conducted intensive market research, including surveys and in-depth interviews with families with young kids — who they assumed would be the product’s primary customers.

In the early days of the startup, they also received sage advice from seasoned entrepreneurs in MIT’s Venture Mentoring Service (VMS) — on MIT’s campus and in San Francisco. A key lesson from VMS, Kalanithi says, was the necessity of developing a mission statement.

“Before we knew what we were doing, we had to find a vision, and core values,” he says. “I thought it was stupid at that time, but I was wrong. Because it’s not a couple of guys starting a company, it’s a group of people that need to cooperate in an intensely productive way. So you need an idea everyone can align on. If you can establish that, and let people rip, then good things will happen.”

Sifteo would go on to sell thousands of Sifteo Cubes to a customer base of teachers, families, makers, and gamers, among others. A software kit created by Sifteo’s engineers allowed developers to create more than 50 games for two generations of the cubes.

Yet the toys never found a broader audience, Kalanithi says, due in part to the sharp rise of iPads and tablets — which allowed for touch-based gaming. To compete, Sifteo had tried developing a third generation of games that better used the physicality of the cubes. For instance, one game involved stacking cubes at one end of the table, and sliding another as a puck to bump the tower without toppling it.

But it wasn’t enough for the long run, especially given the electronic competition. “Turns out [iPads and tablets] were close enough to the experience we were providing,” Kalanithi says. “Even though we, and certain groups of people, saw the differences very clearly, most people didn’t instantly.”

As it turns out, however, a host of electronics and hardware companies had started courting Sifteo with acquisition deals — including 3DR. Open to taking its technology and expertise down new paths, Sifteo accepted 3DR’s offer.

Reflecting on the deal, Merrill, now vice president of enabling technology at 3DR, says transitioning MIT-trained engineers of consumer electronics to a drone company is, in fact, a logical move. “We both bring a strong culture of shipping products, being interested in building cool stuff, and being enthusiastic about the possibilities of technology,” he says. “It’s a near-perfect cultural fit.”