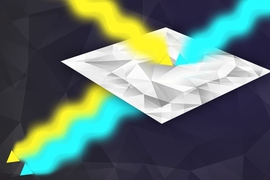 ↓ Download Image
Caption: In the researchers' new system, a returning beam of light is mixed with a locally stored beam, and the correlation of their phase, or period of oscillation, helps remove noise caused by interactions with the environment.
Credits: Illustration: Jose-Luis Olivares/MIT

Caption:
In the researchers' new system, a returning beam of light is mixed with a locally stored beam, and the correlation of their phase, or period of oscillation, helps remove noise caused by interactions with the environment.
Credits:
Illustration: Jose-Luis Olivares/MIT

The extraordinary promise of quantum information processing — solving problems that classical computers can’t, perfectly secure communication — depends on a phenomenon called “entanglement,” in which the physical states of different quantum particles become interrelated. But entanglement is very fragile, and the difficulty of preserving it is a major obstacle to developing practical quantum information systems.

In a series of papers since 2008, members of the Optical and Quantum Communications Group at MIT’s Research Laboratory of Electronics have argued that optical systems that use entangled light can outperform classical optical systems — even when the entanglement breaks down.

Two years ago, they showed that systems that begin with entangled light could offer much more efficient means of securing optical communications. And now, in a paper appearing in Physical Review Letters, they demonstrate that entanglement can also improve the performance of optical sensors, even when it doesn’t survive light’s interaction with the environment.

“That is something that has been missing in the understanding that a lot of people have in this field,” says senior research scientist Franco Wong, one of the paper’s co-authors and, together with Jeffrey Shapiro, the Julius A. Stratton Professor of Electrical Engineering, co-director of the Optical and Quantum Communications Group. “They feel that if unavoidable loss and noise make the light being measured look completely classical, then there’s no benefit to starting out with something quantum. Because how can it help? And what this experiment shows is that yes, it can still help.”

Entanglement means that the physical state of one particle constrains the possible states of another. Electrons, for instance, have a property called spin, which describes their magnetic orientation. If two electrons are orbiting an atom’s nucleus at the same distance, they must have opposite spins. This spin entanglement can persist even if the electrons leave the atom’s orbit, but interactions with the environment break it down quickly.

In the MIT researchers’ system, two beams of light are entangled, and one of them is stored locally — racing through an optical fiber — while the other is projected into the environment. When light from the projected beam — the “probe” — is reflected back, it carries information about the objects it has encountered. But this light is also corrupted by the environmental influences that engineers call “noise.” Recombining it with the locally stored beam helps suppress the noise, recovering the information.

The local beam is useful for noise suppression because its phase is correlated with that of the probe. If you think of light as a wave, with regular crests and troughs, two beams are in phase if their crests and troughs coincide. If the crests of one are aligned with the troughs of the other, their phases are anti-correlated.

But light can also be thought of as consisting of particles, or photons. And at the particle level, phase is a murkier concept.

“Classically, you can prepare beams that are completely opposite in phase, but this is only a valid concept on average,” says Zheshen Zhang, a postdoc in the Optical and Quantum Communications Group and first author on the new paper. “On average, they’re opposite in phase, but quantum mechanics does not allow you to precisely measure the phase of each individual photon.”

Instead, quantum mechanics interprets phase statistically. Given particular measurements of two photons, from two separate beams of light, there’s some probability that the phases of the beams are correlated. The more photons you measure, the greater your certainty that the beams are either correlated or not. With entangled beams, that certainty increases much more rapidly than it does with classical beams.

When a probe beam interacts with the environment, the noise it accumulates also increases the uncertainty of the ensuing phase measurements. But that’s as true of classical beams as it is of entangled beams. Because entangled beams start out with stronger correlations, even when noise causes them to fall back within classical limits, they still fare better than classical beams do under the same circumstances.

“Going out to the target and reflecting and then coming back from the target attenuates the correlation between the probe and the reference beam by the same factor, regardless of whether you started out at the quantum limit or started out at the classical limit,” Shapiro says. “If you started with the quantum case that’s so many times bigger than the classical case, that relative advantage stays the same, even as both beams become classical due to the loss and the noise.”

In experiments that compared optical systems that used entangled light and classical light, the researchers found that the entangled-light systems increased the signal-to-noise ratio — a measure of how much information can be recaptured from the reflected probe — by 20 percent. That accorded very well with their theoretical predictions.

“This is a breakthrough,” says Stefano Pirandola, an associate professor of computer science at the University of York in England. “One of the main technical challenges was the experimental realization of a practical receiver for quantum illumination. Shapiro and Wong experimentally implemented a quantum receiver, which is not optimal but is still able to prove the quantum illumination advantage. In particular, they were able to overcome the major problem associated with the loss in the optical storage of the idler beam.”

“This research can potentially lead to the development of a quantum LIDAR which is able to spot almost-invisible objects in a very noisy background,” he adds. “The working mechanism of quantum illumination could in fact be exploited at short-distances as well, for instance to develop non-invasive techniques of quantum sensing with potential applications in biomedicine.”