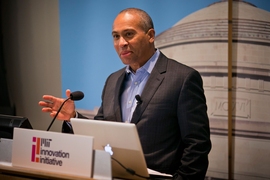 Former Massachusetts Gov. Deval Patrick, who completed two terms in office in January, has spent part of his time since then as the inaugural visiting innovation fellow at MIT’s Innovation Initiative. Since leaving office, Patrick announced that he has joined Bain Capital to start a new business focused on delivering attractive financial returns by investing in projects with significant, positive social impact. MIT News sat down with Patrick last week, on his final day at the Institute, for a conversation about technology, policy, and more.

Q. What has your experience been at MIT this semester?

A. I’ve had a wonderful time here. I had some wonderful interaction with students and faculty. President [L. Rafael] Reif is, I think, just an inspirational leader. The openness of people, whether faculty, students, the business community, or others, is a really powerful thing, and has driven a lot of good, not just here in Kendall Square but around the world.

Q. What topics have people wanted to talk to you about?

A. There have been questions that range from groups of students who gather in the innovation lab about where to find seed funding, to broader questions about what kinds of public policy help or hurt innovation. There was someone in here earlier today who wanted to sit and think aloud about how you get entrepreneurs to come together in clusters and create demand for investment pools that the entrepreneurs could use as seed funding. In many respects it’s getting a business going that is the big challenge for folks.

Q. Sometimes people think about MIT’s role regarding innovation only in terms of getting research from the lab to the market. How much does convening power matter?

A. This whole building, the Cambridge Innovation Center, is an example of a convening. I remember President [Susan] Hockfield got the presidents of a couple of area universities, CEOs of a couple of companies, and me together here some years ago for breakfast, probably a dozen of us around the table. And out of that conversation came the green high-performance computing center out in Holyoke, which is one of the most powerful green computing centers east of the Mississippi, and it is a very unusual collaboration between universities and private industry and government.

This whole business of developing the collaborative gene is incredibly important in today’s economy. People think the happening place is Silicon Valley, and they have certain advantages we don’t have — like January and February. In fact, the level of entrepreneurial activity is higher in Massachusetts than in California. But one thing they have going for them is a highly developed collaborative gene. And we need to be about that.

Q. Speaking of public policy and innovation, in your first year in office [2007], you signed a $1 billion, 10-year biotech initiative to support research. What convinced you that this particular field was worthy of investment?

A. We had, first of all, lots of people in the field at various points, up- and downstream, who said we have a lot of the natural resources for a supercluster here. But people need to understand that other states were coming right at us, and putting some public dollars down to do that.

Philosophically, I came to it from the perspective that we couldn’t presume to substitute for the private sector, so the question was what the state could do to supplement those efforts. And it played to our strengths. We have all these teaching hospitals and universities and research institutions … public investment could enable a biotech company to put down roots here and grow. The Boston Foundation and Northeastern University did a report on the initiative a few years ago, where the author of it said he had expected a less favorable outcome. I think we invested about a half-billion dollars in public money and leveraged three, four times that in private investment and created thousands of jobs.

Q. In retrospect, the timing was good, since many other states were heavily dependent on the housing market for growth in that period. How mindful were you of the benefits of diversifying the state economy?

A. I’m not a believer that you just wait out the economic downturn. You have to be intentional about growth. One thing you see in business, and that I learned from my business experience, is that if you want growth, you have to invest in it. So our strategy was to invest in education, innovation, and infrastructure, and to be disciplined about it. … And we got results.

Again, why innovation? Because we have 300 colleges and universities and teaching hospitals within 45 minutes of where we’re sitting right now. It’s the most extraordinary concentration of brainpower. So what are the industries that depend on that concentration of brainpower? Life sciences, biotech, clean tech, the whole range of digital technologies, robotics, precision manufacturing, and more. And those were the industries that lifted us out of recession, in terms of job growth, faster than most other states.

Q. Your approach to clean energy investment was very different, in the sense that you signed a series of bills, not one big one — the Green Communities Act [which supports local environmental projects], the Green Jobs bill [to support in-state clean-energy firms], the Global Warming Solutions Act [which sets emissions targets for the state]. Was that due to anything inherent in the field, or was it political circumstances?

Innovation in government can be hard to do because when something goes awry, it’s all over the news. I’ll give you one example. We invested in a solar company early on, Evergreen Solar, and after a couple years they moved. We didn’t get the job multiples they promised … and we were just pilloried. We had a 46 percent increase in solar employment in the commonwealth in eight years and an increase of about 500 times in [solar] generation. … You don’t want to be careless, because it’s the public’s money, but we as a public are going to have to raise our willingness to lose a couple if we’re going to try some new things.

Q. Then how do you persuade people that this isn’t just spending, it’s investment? Or that you’re not just picking winners and losers, as skeptics of public investment like to say?

And it’s become a problem in government. It’s very short term — it’s the next election cycle instead of the next generation. It’s about governing for the next generation. We have to make decisions, the benefit of which may not be obvious in time for the next election. But in time, they more than pay for themselves. The quintessential example of that is the public schools. You do right by a second-grader because today is her chance in the second grade. How that went, what the value of that was, you may not know until high school.

Q. You’re now moving to Bain Capital to start practice social-impact investing. What is your goal in doing that?

A. In the case of social-impact investing, what we’re trying to do in my new firm, the business we’re trying to build, is being intentional about both the financial return and the positive impact on people or the planet. And there is a lot of choice within that, which we’re going to have to make as we develop our business plan

Q. There are different kinds of positive effects that investments can generate — jobs, long-term environmental benefits, housing. How do you weigh those things and choose priorities?

A. That’s an important question. Those are also among the choices we will make, because I think it’s important to have a couple we will concentrate on, at least in the first fund. … One of the things I’m most interested in personally is access to affordable health care, and how we do that in way that drives down system costs. I think there are a lot of opportunities … which is a somewhat challenging thing to say in this community of extraordinary health care [providers], but I think it has to happen.

Q, Any last thoughts about your experience here?

A. Have me again! I hope to keep my association with MIT, even if informal, very robust. It’s a special place.