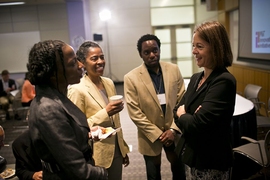 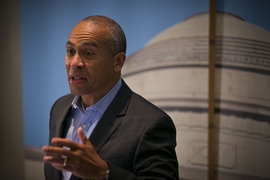 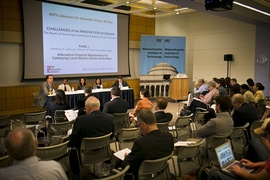 Opportunities abound for entrepreneurs in socially beneficial fields like clean technology and health care — but new financing methods may be needed to realize their potential, according to scholars and practitioners who attended an MIT conference Thursday on “social impact investing.”

This growing field encompasses a broad range of firms, including those driven by cutting-edge technologies, and others that bring new forms of business to communities that have been struggling economically. The effects of social impact investing include jobs as well as the wider benefits some new businesses may yield.

“What appeals to me about the social impact investing field,” said former Massachusetts Gov. Deval Patrick, a featured speaker at the event, is “doing well by doing good.” Patrick recently announced that he is joining the Boston-based investment firm Bain Capital to launch a portfolio devoted to social impact investing.

But many promising research advances or business ideas may be blocked from the marketplace by financing issues, since their economic value is uncertain, as panelists at the event observed.

For instance, in the field of drug development, “I see a lot of the problems of translating research into practice as being financing problems,” said Andrew Lo, the Charles E. and Susan T. Harris Professor at the MIT Sloan School of Management.

To work around these issues, Lo has proposed some alternative financing mechanisms for the biotechnology-based pharmaceutical industry, such as the issuing of bonds to finance more research and development. Investors could then buy the bonds with the idea that in aggregate, a portfolio of research projects would yield a positive payoff.

“If people want to invest in this economy … there is a funding gap at that level,” Chapin said.

The conference, “Challenges of the Innovation Economy: The Power of Social Impact Investing to Catalyze Inclusive Innovation,” was held in the auditorium of MIT’s Koch Institute for Integrative Cancer Research, and organized by the MIT Innovation Initiative.

To be sure, as some speakers noted, some innovations that initially appear to have social use may lack staying power, or may never be adopted in some places. Tavneet Suri, the Maurice F. Strong Career Development Associate Professor at MIT Sloan, noted that microfinance, sometimes hailed as a breakthrough approach in South Asia, has been little-used in Africa.

On the other hand, Africans have much more rapidly adopted payment systems that work through mobile phones. The mobile payments system “fits a need for the people,” Suri said, adding: “There’s huge room for innovation in the financial space in Africa in terms of what financing looks like.”

Another challenge for social impact investing is the problem of measuring the value produced by new technologies or businesses, relative to old practices. For example, infrastructure investment lacks a basic “framework” for measuring those benefits, said David Wood, director of the Initiative for Responsible Investment at the Harvard Kennedy School.

“You can’t manage what you can’t measure,” Lo added. In the case of health care metrics and drug development, however, analysts have been able to develop careful measurements of the relative impact of many drugs.

Careful analysis of the social effects of new products is part of the MIT Innovative Initiative’s research agenda, noted Fiona Murray, the Bill Porter Professor of Entrepreneurship, associate dean for innovation at MIT Sloan, and co-director of the Innovation Initiative, in her opening remarks.

While many people at MIT practice innovation, Murray noted, “We’re trying to combine this with the science of innovation.”