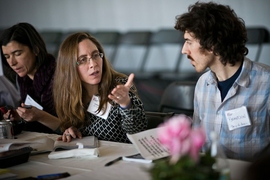 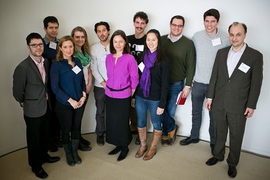 On Monday, the MIT Innovation Initiative convened representatives from all of the Institute’s innovation-focused programs, labs, and centers to showcase and gather feedback on ongoing and pilot projects.

The Innovation Initiative is an Institute-wide effort, launched in 2013 by President L. Rafael Reif, intended to accelerate the moving of research from the lab to the marketplace by strengthening MIT’s capacity for innovation.

After a series of meetings with faculty and students, in December the Initiative — co-led by associate deans Vladimir Bulović, the Fariborz Maseeh Professor of Emerging Technology, and Fiona Murray, the Bill Porter Professor of Entrepreneurship — released a preliminary report proposing a series of steps aimed at strengthening MIT’s innovation ecosystem.

Among other things, it included a proposed innovation and entrepreneurship minor; a proposal for global innovation communities; and an app for students — set to launch soon — that instantly locates MIT’s many tools and maker spaces.

Monday’s event, “Innovating as OneMIT,” held in the MIT Media Laboratory, represented the first of many intended to rally the innovation-focused campus community to discuss, refine, and create new programs and opportunities, Bulović said.

“The only way to launch something this important is to engage the entire community and do it on a constant basis,” he said. “Then we can develop the ecosystem to make it easier for the next level of innovation that our students may want to engage in.”

In her opening remarks, Murray said the event would enable the Innovation Initiative to better fulfill its mission of helping the MIT community more easily find real-world applications for its innovations.

“We basically want to enable our students, our faculty, our staff, and our alumni — and indeed, a whole community of global innovators — to bring their ideas to impact more rapidly and more effectively,” she said.

Projects on the rise

Innovation Initiative staff, and faculty who serve on a 19-member advisory committee, showcased six new projects that are in various stages of development. The event concluded with a breakout session where attendees could provide feedback and insights to project leaders.

The showcased projects and presenters:

In introducing Mobius, Culpepper — designated by the Department of Mechanical Engineering as its “maker czar” — said MIT has more than 120,000 square feet of maker space on campus. Yet, he said, students still struggle to find appropriate resources, due to confusion over operating hours, payment methods, training, and other issues. “That is two football fields of maker space,” Culpepper said. “It’s telling that we don’t have enough space to serve our students.”

With Mobius, he said, a student looking for, say, a lathe can type that into the app. A map will pop up, pinpointing an available lathe, with information on how to get access, how to pay for use, and other topics. The mechanical engineering department is also developing a “maker passport” for Mobius that keeps track of what machines students are trained on, so they can flash that at the door. “The first boundary [for students] is finding out what they can use,” Culpepper said.

Among those described, the project that is still at the earliest stage of implementation is the innovation semester. Among other things, its breakout session with graduate students, alumni, and staff focused on what classes may be needed to support such an effort, and how to let students travel to meet customers, Haraguchi said.

Haraguchi said he has learned that there is a pressing need for a network to better connect students with experts who are relevant to their projects. “I think we should recognize how valuable that [network] is, and how that’s one of the most effective ways for students to solve problems — to connect with the right person at the right time,” he said.

The event also showcased student innovations made possible through various MIT resources. Ten students presented on how they used MIT labs, centers, and programs to help launch projects into the real world.

Engineering Systems Division graduate student Kevin Simon presented work he’s doing as part of the Tata Center for Technology and Design, which aims to develop solutions for challenges in developing countries, with a focus on India. Founded in 2012, the center now has 59 fellows and 45 professors working on 40 projects at 20 sites in India.

Simon co-invented low-cost, solar-powered pumps that will give some 20 million farmers access to shallow water for irrigation, instead of using expensive diesel generators. Currently, there are no mass-produced commercial pumps intended for use by Indian farmers, said Simon, who just traveled to Mumbai to trial the pump. “People with the know-how aren’t working on this,” he said. “That’s one of the best things about the Tata Center: It always challenges and encourages us to reframe the problem.”

Another speaker, alumnus Sam Shames ’14, launched his company, Embr Labs, after his team won MIT’s MADMEC competition for its thermoelectric “wristwatch” to heat or cool the body. Shames and his colleagues subsequently enrolled in the Global Founders Skills Accelerator, a summer incubator in the Martin Trust Center for MIT Entrepreneurship, and are now focusing on prototyping.

Contests like MADMEC are key to innovation, Shames said, as they promote the trialing of novel technologies. “Because we had that place where we could try an idea and have it fail and be OK, that’s how we got to where we are today,” he said.